This saint lived in the time of Justinian the Great. [Born in 439], he was the son of devout parents, Ioannis and Sophia, and came from the country of Cappadocians, from a place called Moutalaski. From his earliest childhood, he was interested in the life of the monks and entered the monastery of Saint Flavian. So abstemious was this renowned man from an early age, that he once saw an apple in a garden and, despite his desire to eat it, he trampled it into the ground, saying “Beautiful to the sight and exquisite to the taste was the fruit that caused my death”. 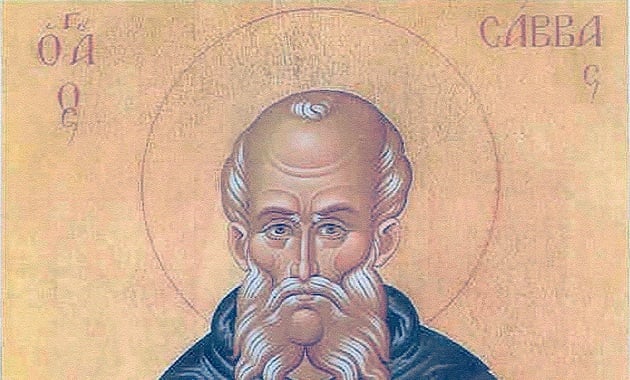 Thereafter he made it a rule for himself never to eat another apple for the whole of his life. On another occasion, the saint entered a furnace which was alight, but came out unharmed, without the fire so much as touching his garments. When he was seventeen, he went to Efthymios the Great but was sent to the monastery of Saint Theoktistos, because he was still beardless [i. e. too young to stay with him]. At this monastery the saint derived great benefit from all the brotherhood, since he imitated each of them in virtue and their God-pleasing life. For this reason, Efthymios the Great called him a Child-Elder.

A good few years later, however, Efthymios took him with him when he went out into silent contemplation at the time of Great Lent. The older he grew, the greater  his virtue became and so he received from the Lord the grace to work miracles. And the thrice-blessed man worked many, even causing water to flow in barren places. He also became the guide and abbot of many monks. Twice he served as an ambassador to Constantinople on behalf of the then Patriarch of Jerusalem, first to Emperor Anastasios, in 492, and later to Justinian, on matters of urgent business. When he was well-stricken in years, at the age of 94, “he departed to the Lord”.