The island of Cyprus was where this outstanding saint was born and also where he served the Church. He was born into a family of ordinary country folk and remained a simple and humble man throughout his life, until his demise. He was married at a young age and had children, but when his wife died he devoted himself entirely to the service of God. Thanks to the exceptional piety which distinguished him, he was elected bishop in the town of Trimythous. Even as bishop, however, he didn’t alter his simple way of life. He continued to look after his animals himself and to cultivate the ground with his own hands. 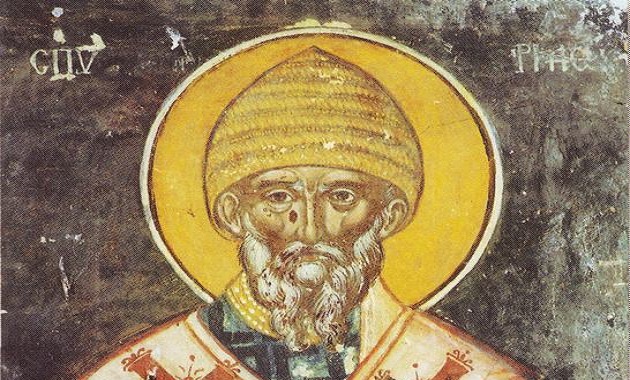 He kept very little of his produce for himself, preferring to share the greater part with the destitute. Through the power of God, he performed great miracles: he brought rain during a period of drought; stopped the flow of a river; raised people from the dead; cured the emperor, Constantine, of a serious illness; saw and heard angels of God; foretold the future; discerned the secrets of people’s hearts; brought many people to the true faith; and much else besides.

He took part in the 1st Ecumenical Synod in Nicaea (325), and brought many heretics back to the Orthodox faith, thanks to his clear and simple views on it and to his great miracles. Saint Spyridon was so ordinary in his appearance that when he once wanted to enter the royal court, at the invitation of the emperor, a soldier took him for a beggar and struck him on the face. Humble and guileless as he was, Saint Spyridon turned the other cheek!

He glorified God with a host of miracles and benefited not only a large number of people, but the Church of God as a whole. He went to his rest in the Lord in the year 348. His wonder-working relics are preserved on Corfu and through them he continues to glorify God to this day with the miracles he performs.

Nothing can benefit us if we aren’t compassionate towards other people and if we don’t forgive them their weaknesses. How can we hope to be forgiven by God, unless we first forgive others. On one occasion, Saint Spyridon sold a hundred goats to an animal trader at a price they had agreed on and the saint asked for his money. Knowing that Saint Spyridon never counted money, the trader gave him enough to cover the cost of ninety-nine goats and kept back the cost of the hundredth. The saint counted out a hundred goats and handed them over.

But as the trader and his servants were leading the flock away, one of the animals started bleating and tried to return. He chased it but it wouldn’t go back. No matter how many times he chased it, it kept leaving and didn’t want to go with the other goats. Then the saint approached the trader and whispered in his ear: “Look, son, it’s no coincidence that the animal’s behaving like that. Did you maybe hold back what was due for it?”. The trader felt ashamed and confessed his sin. As soon as he’d paid the sum he’d held back for the goat, the animal left immediately and went to join the rest of the flock.

On another occasion it happened that rustlers managed to get into Saint Spyridon’s sheep-fold. When they’d seized as many animals as they could manage, they turned to make their escape, but an unseen force held them in the same place, so that they were unable to move. At dawn, when Saint Spyridon went out to see to his flock, he rebuked them mildly and urged them to live in future off their own efforts, rather than by resorting to stealing. Then he took a sheep and gave it to them, saying: “This is for your trouble, so that your all-night vigil won’t go unrewarded” And then he sent them away in peace.