The Righteousness of Humility

In January, 1976, Fr. Matthew delivered a sermon in the church of Abba-Skheiron in the Monastery of Saint Makarios. He makes many of the same points as John Chrysostom did in his Discourse on Baptism, but then goes to make a further, very interesting observation.

“But I still feel, beloved, that I have not conveyed the full meaning of Christ’s bowing His head to John. 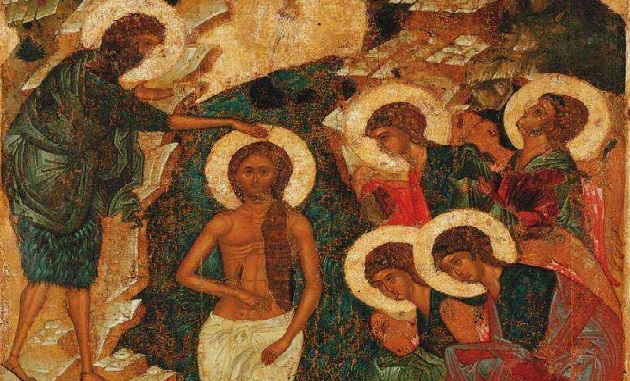 This action of Christ’s by the Jordan stirs our consciences deeply. I might almost say that by it Christ has this evening exposed our pride and revealed how far we are from understanding and practicing “true righteousness”. How hard it is for a layworker or priest to bow his head to receive a blessing from one his equal! What Christ did went beyond all sense and logic. There was no fault in Him that He should bow His divine head under a human hand to be anointed.

By this submission, which supersedes all the logic of priesthood, Christ established a righteousness in greatness, action, and warmth. He saw fit to record here in the Jordan, at the beginning of His public ministry, the firm foundation on which a successful ministry must be based, “the bowed head”. This is borne out and confirmed by the parallel we find in what Christ did the night He instituted the mystery of the Lord’s supper, when He stooped down completely and sat on the ground to wash the disciples’ feet. It is as if bowing the head in contrite submission is the formal beginning of every divine mystery, whether baptism or the eucharist.

The true significance of this point appears when we remember what Christ said to Peter when he tried to excuse himself from having his feet washed, thinking it was too much that he should stand like a master having Christ before him like a slave and servant. The Lord rebuked him: “If I do not wash you, you have no part in Me” (Jn. 13:8). The same thing happened at His baptism, when John tried to excuse himself from the task of laying hands on Christ’s head and baptizing Him in the water. The Lord cut him short saying, “Let it be so now; for thus it is fitting for us to fulfill all righteousness” (Mt. 3:15).

Christ’s firm intention here to insist on the absolute necessity of His taking up a position before both John and Peter reveals to us the importance and seriousness of the mystery of humility and submission in serving the Church, in the priesthood and, in the Christian life in general. It is the basic way of entering into righteousness. “For I have given you an example, that you also should do as I have done to you… If you know these things, blessed are you if you do them” (Jn 13:15,17).

The truth that we Christians must never forget is that Christ here abruptly reveals the normal order of things to make us vigilant. Christ here rejects the human concept of justice and turns it upside down. He rejects every logic of self-defense and pours scorn on it, for after He has bowed His head beneath the hand of John we can no longer ask with dignity, “Who is the greatest?” Our dignity lies in our deliberate and instant relinquishment of every dignity, and in surrendering it to those who are less than we. We can no longer uphold claims to leadership or priority or privilege, for the extent to which we humble ourselves before the community is what establishes our righteousness and our true leadership; our actions are to be commended in proportion to the renunciation of our own worthiness.

John the Baptist’s readiness to baptize Christ was an act of obedience and submission that may be compared with the humble and modest response of the Virgin Mary, when God chose her to bear Christ. The obedience and submission of John the Baptist to the Lord’s command to baptize Him prepared the way for Christ to enact, within the rite of the mystery of baptism, the amazing mystery of humility, which He called the mystery of the fulfillment of righteousness. Here in the Jordan, as later when He washed the disciples’ feet, the Lord demonstrates His submission, like a slave, under the hand of John to abolish the shame of man, who refused to submit to the hand of God.

Once again we stop to contemplate how heaven was moved by the humble acts of the Lord Jesus. When Christ was born and laid in a manger in a stable, the heavens opened, and the angel and the hosts of heaven appeared to announce the good news of a great salvation and to glorify God. Here at the Jordan the same thing happens. The heavens open, the Holy Spirit appears visibly, and the voice of the Father Himself announces the identity of this Man bowing His head before John: “This is my beloved Son, with whom I am well pleased” (Mt. 3:17). So it is that, in so far as we on earth humble ourselves, God reveals Himself and with the angels of heaven gives us glory.

We notice too that the Holy Spirit, taking the form of a dove, alights on Christ as He bows Himself down. He does not appear as a tongue of flame as on the day of Pentecost, nor as a heavy hand upon the head as it happened to the Old Testament prophets, for the Holy Spirit chooses the form in which He appears according to the condition of the one He comes upon. The Spirit chose the form of the gentle dove to reveal the nature of the heart of Jesus and His great meekness, love, and humility.

How much do we need today the meekness of the heart of Jesus as He stands bowing down before John in simple humility and submission, so that the Holy Spirit may come upon us in the form of a dove to bring us closer to the Jesus of the Jordan and unit our hearts together with that gentle, humble heart!

At the Nativity we took the meekness of infancy as a standard by which to live at all times as preparation for entering the Kingdom of Heaven. At the Jordan we take the bowed head of Christ as a standard by which we may be prepared to live in humble fellowship with the Holy Spirit, and as a vocation to fulfill in the world.

Just as Christ urges us to go back and remain always as children so that we can enter the Kingdom of Heaven, He urges us also to be meek as doves. This is the anointing we need for service and for living in the world. Christ is always ready to give us the spirit of infant humility according to His stature in Bethlehem, and the spirit of the humility of the dove according to His stature in the Jordan, so that we can be prepared outwardly and inwardly to attain the full stature of Christ.