Not only that, but because he was so handy at whatever he was doing, the Elder also sent him to the dependency at Monoxyliti, to Saint Onufrios’, the mill, the boat-house, everywhere, inside and out. He  was always willing to perform his obedience to the letter and to continue with his ceaseless prayer. He was also punctilious with regard to his monastic rule. He never omitted the slightest thing; at those long services and vigils which the Monastery has, he was always first in and last out. When he was getting close to eighty, however, the abbot relieved him of all his duties and from then on he devoted himself entirely to the ascetic life and to unceasing prayer. 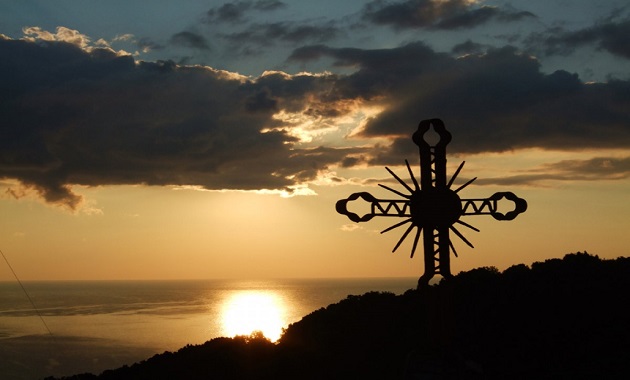 He ate very little; just enough to live on. And, at the same time, he thought up another ascetic practice: “Since I don’t have any obediences any more, I don’t need to go anywhere, except for church and my cell”. From then on,  he kept to the rule for the rest of his life. Only once did he leave the church though the front door, and that was when his holy remains were taken off to his final resting-place.

As regards education, he was almost illiterate. Despite that, for the few years we lived together, we would all repair to old David’s cell to hear his wise advice. And not only us, but people from other monasteries, too. Even abbots, such as the noted Archimandrite Yeoryios, the Abbot of the Holy Monastery of Grigoriou, who’s like a walking encyclopaedia in terms of knowledge, though he set this aside to listen to a simple, unlettered monk, who was, however, a teacher with the wisdom of the Holy Spirit.

He had such self-denial that he didn’t look after himself, to the point that some others took it amiss. His cell wasn’t tidy, wasn’t swept and he wasn’t interested in anybody doing it for him or washing his clothes. And apart from anything else, there were a lot of bedbugs in his cell. People would sometimes want to visit him, but, as was natural, were afraid to come out covered in bugs. But I saw this remarkable event with my own eyes. We said to him: “Father David, we’re worried about the bedbugs”. He replied: “No, no,  don’t be. I’ve asked Our Lady and she’s gathered them all together in that corner”. We looked and what did we see. Just like bees in a hive, the bedbugs were all gathered together, one on top of another, all in one place. “Don’t worry, there’s none over here”. When he was alone, however, they left that spot and crawled all over his body. But he never brought one into church.

In 1982 he began to go downhill and the Elder Papa-Haralambos urged us to take him to the monastery’s infirmary. Even though he was suffering- he couldn’t get up- his honeyed words gave support to the brothers who visited him.

He didn’t abandon the good habit of his rule until his final moments. Because he was bed-ridden, he wouldn’t speak to anyone, but with his chaplet in one hand and his cross in the other, he would finish the prayers of his rule.

When we, the new brotherhood, arrived from Bourazeri, with my late Elder, Papa-Haralambos, he was overjoyed, particularly because the new Abbot encouraged frequent communion. He would often say to us, in his simple manner: “A monk who’s obedient and takes communion regularly doesn’t fear the devil. The accursed one has thrust many people into the things of the flesh through obstinacy and disregard for communion”.

The time came for him to depart to his desired home. It was the harsh winter of 1983. Flu had spread through the monastery from one person to the next, until we all had it. A lot of the older monks were unable to rise from their beds. Eventually it spread to the infirmary and to Father David and so, peaceful and well-stricken in years, he departed for the land he so desired, on 5/2/1983.