Over the course of my stay of some fifty years in the refuge of repentance and prayer, the beautiful bower of Our Lady the Mother of God, the protectress and overseer of the splendid earthly paradise which is called the Holy Mountain, it has never ceased to be a breeding-ground for saints and never will, until the end of the age. A few examples from our own time: Saint Silouan the Athonite, Savvas, later of Kalymnos, Iosif the Hesychast, Païsios the Athonite and a host of other well-known and unknown saints, among whom is the recently-proclaimed Saint Porfyrios Kavsokalyvitis. 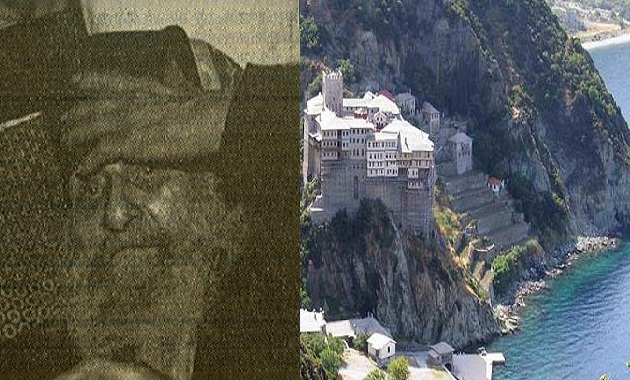 As for myself, it has happened  that I have been called upon to write the life of three great, contemporary personalities: my late spiritual fathers, Papa-Haralambos Dionysiatis, Arsenios the Cave-Dweller, and, recently, a Serbian ascetic of my acquaintance,  Fr.  Đorđe Vitković, (known as Branko). I have also written, in brief, about the great personalities of the Elders Gavriil and Theoklitos, both from the Monastery of Dionysiou, as well as about Elder Iosif, the great Elder and renovator of the Holy Monastery of Vatopaidi. I have also been asked to write something about the most excellent fathers of the Monastery of Dionysiou with whom I shared the monastic life. Alas, when we had these treasures with us, I never even thought about keeping notes. So now, I beg the indulgence of my readers and will try to dredge up the little I remember.

Monk David, who was born Dimos Floros, did not become a monk at an early age, even though he had wanted to very much. Unfortunately, the ignorance of his parents obliged him, against his will, to marry a modest girl from the same village. So he lived the married life and actually fathered two children.

One reason he didn’t argue with his parents was that, although they knew nothing about monasticism, they were very believing Christians and whatever good traits he had in his character, he owed to them. They were honourable folk, devout, they observed the commandments of the Lord punctiliously, went to church regularly, confessed, took communion, fasted, gave alms and, according to what he told me, never asked for interest n anything they loaned Above all, however, they had love in Christ, which they effortlessly transmitted to their children. He learned to pray without ceasing and, indeed, from a very early age was granted visions of the ranks of the angels ascending and descending and praising the Most High.

It was not possible that the fervour of his prayers would go unnoticed by the powers of evil, which were burned by the power of his prayer. They often appeared to him and frightened him, in order to stop him burning them. But in his natural simplicity, he did the opposite and resisted even more firmly, with his prayer in the name of Christ and of Our Most Holy Lady and the power of the Cross. As he used to say: “Ah, you should see how the accursed things tremble and become smoke as soon as you put on a cross and they hear the name of Our Lady”.

By divine dispensation, his wife happened to be an honourable and humble girl. Young Dimos, as he then was, told her straight away that he was being forced into the marriage, though what he really wanted, even if only later, was to become a monk. Fortunately, the girl agreed. And so, as soon as they had married off their two children, he reminded his wife of the promise and she, being the good person she was, respected his wishes and gladly gave her permission.

The spiritual warrior lost no time. He left at once to go to the Holy Monastery of Dionysiou, having first stayed a while (I don’t know the reason for this) at Grigoriou. He quickly moved on and presented himself to the famous and experienced Abbot Gavriil, to whom he opened his heart. The wise abbot kept him for a time to see if, at his age and after having been married, Dimos could adapt to the harsh life of a monk, especially in the strictest of the coenobitic monasteries on the Holy Mountain. When Abbot Gavriil saw that Dimos, as another Saint Paul the Simple, put his heart and soul into it, he said to him: “Dimosthenis, I can see that you having the makings of a monk, but there’s something we must do first. Go back to your village and bring back written agreement from your wife”.

“But, Elder, we’ve agreed. I never want to leave the Mountain again”. “If you want to stay here, you have to bring her written agreement”. Of necessity, he left, losing no time. He hastened to his village, just for one day, received the written agreement of his wife and then, like a thirsting hart, returned to the Mountain, with the firm resolve never to leave it again, whatever happened.