The Creation in Science and Orthodoxy – Part I

It’s astonishing how, in our own day and age,  the description of the Creation in Holy Scripture has come to coincide with that of modern science. Especially as regards the initial period, where the contributory science is only physics, the scientific description is consistent, even down to the details, with the description in Genesis concerning “day one”, though this is a text written more than 3,500 years ago. And it’s even more remarkable that this agreement began to become apparent only after 1920. Until then, science believed that the universe had no beginning. It was only after 1963 that a beginning for the universe started to become accepted. And in recent years (end of 20th– beginning of the 21st centuries) the age of the universe has been measured and has been found to be about 13.8 billion years.

Since I shall be saying a lot about this unique day one, let us begin with the wonderful Scriptural description.

So nothing pre-existed. Time, as understood by our science, was created and started running with “in the beginning”. During the creation of the angels, which certainly preceded, there was probably no time as we conceive of it today. There would have been another kind of time, though. But the Lord Jesus was “begotten from the Father before all ages”. Before any kind of time was created and began running, the Son was begotten- not made.

But space (the heavens) also started to be created “in the beginning”. The image we have of space today began from General Relativity and the research of those pictured in Fig.1. Later, I shall try to explain their work, which was named the Big Bang theory. Before doing so, however, I should like to stress that the creation of primitive matter and energy occurred at the same time as that of space. Matter and energy are one and the same in General Relativity. So when we talk about matter, we simultaneously mean energy. The heavens, then, in Holy Scripture, is space and (in the interpretation which we shall follow in this article), primitive matter-energy is the unformed earth. Both of these were created together, in the beginning.

In the Big Bang, what explodes and created through the explosion, is space. In the beginning, the whole space of the universe was an infinitesimally small speck, within which all the matter-energy was gathered, with tremendous density and pressure. Suddenly, at time zero[1], the various parts of the speck began separating out and the speck expanded. In the beginning, very violently, later less so. Even today, this initial tiny speck, which now has reached enormous dimensions, continues to grow and the universe is expanding. And we can see and measure it.

The whole phenomenon is extremely unstable, like balancing a pencil on the edge of a table. If you just touch it, it falls. If the initial density values of matter-energy or of pressure deviate just slightly from the ones desired, it would be impossible to create a space that lasted at least as long as ours has. And even if, at the start, some space had been created, these minute differences would have quickly forced it to begin to contract, so that it would again have been reduced to an infinitesimally small speck, as it was initially. The universe would have died without managing to acquire stars or to support life. 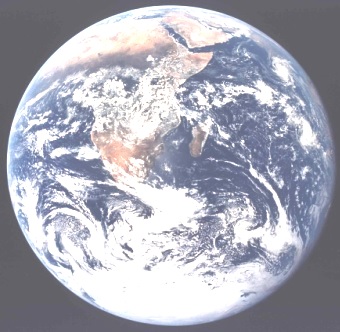 But space in our universe survived. At least we know that it has survived for 13.8 billion years and has managed to support human life.But before proceeding to an interpretation of the Scriptural description, let’s see, in pictures, some of the characteristic features of our universe. First, planet Earth (Fig. 2) It has a radius of some 6,000 kilometres, which is about 100 times less than that of the Sun. From a distance, our Earth looks like a beautiful, blue speck. Generally, the planets revolve around stars (such as the Sun), forming planetary systems. The planetary systems have a tendency to form galaxies. Since the planets don’t have their own light and their masses are generally negligible, only stars (Suns) appear in pictures of galaxies. Figure 3 shows our own galaxy, as it would be seen by an observer who was outside it. The different specks represent stars-suns, gases and dust. On this scale, the planets aren’t apparent. Our sun is indicated with the yellow arrow. 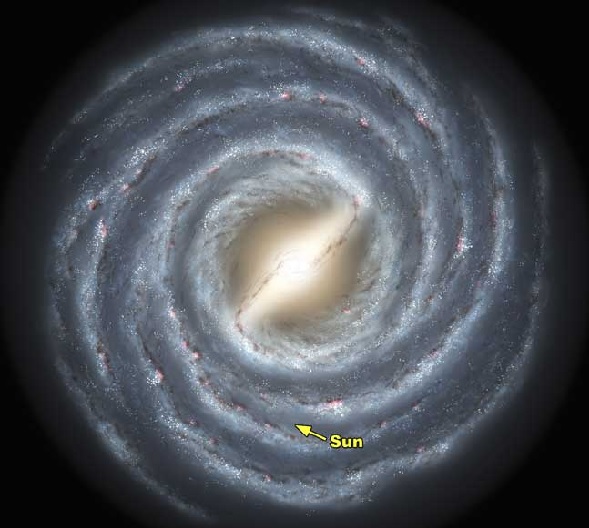 [1] For the measurement of time, we’ve used the clock incorporated in General Relativity.