The Creation in Science and Orthodoxy – Part II

The whole of the visible matter in the galaxies consists of nuclei and electrons, such as those we encounter in familiar atoms. We call this matter Known Matter. When we observe pictures of galaxies, we can estimate their mass and, from this, the force of the gravity holding them together. In every case, we can tell that the masses of the galaxies we see aren’t sufficient to sustain them. Under normal circumstances, then, there shouldn’t be any galaxies. The fact that they do exist, however, compels us to accept that they contain other matter, which our telescopes are unable to observe (at least directly). This matter must be of an entirely new form. It can’t be the known matter we referred to above. We call this Dark Matter. 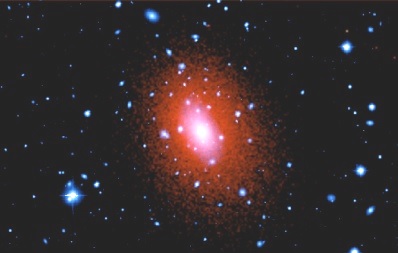 Figure 4. The Abell 2029 cluster of galaxies

But the galaxies, too, tend to appear in groups which are called clusters. Figure 4 shows the Abell 2029 cluster of galaxies, which is 1 billion light years away. The blue specks are galaxies here. The red areas are masses of hot gases of millions of degrees and can be seen through X-rays. Again, the observable known matter isn’t sufficient to sustain such a cluster. In general, the dark matter in the universe must be about five times that of known matter. 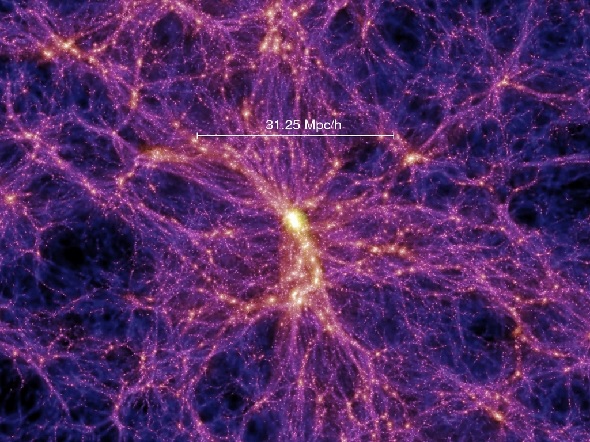 On an even larger scale, the universe resembles a sponge of cosmic dimensions, which is known as the cosmic web. Figure 5 shows a computer simulation of the cosmic web in a typical region of the universe, equal to about one twenty-fifth (1/25) of the whole of the perceptible universe. The yellow specks here denote clusters of galaxies and the accompanying clouds of gases, while the lilac specks represent dark matter. The black regions (which correspond to the holes in a sponge) indicate enormous vacuums. These are separated  by surface structures (like the surfaces that separate the holes of an actual sponge) and are traversed by filaments. All the matter in the universe is gathered in these surface and filament structures. The horizontal white line in the picture represents a length of some 145 million light years and thus is an indication of the scale.

This, then, is the universe we are talking about. Only 5% of the energy which exists in it today comes from known matter. The dark matter we mentioned above, constitutes about 27% of the whole of today’s energy. Therefore the total energy of the universe, known and dark, contributes  (5+27)% = 32% of all its energy. The remaining 68% seems not to have material form. It appears to come from the mere vacuum, which also has energy (and pressure). This is called Dark Energy.

We quoted above the Scriptural description of “day one”, and gave some general information concerning the components of the universe. Hereafter we shall attempt to set out the two descriptions in parallel.

“In the beginning, God created the heavens and the earth. The earth was without form and void, and darkness was over the face of the deep. And the Spirit of God was hovering over the face of the water”. As space expanded, the initial energy-matter changed forms very rapidly. The temperature, which was enormous in the beginning, fell continually. At first, very quickly. Later, more slowly. A whole host of particles (like those we encounter in modern accelerators) were then being produced and almost immediately decayed[2]. Soon after the first twenty minutes, the known matter of the universe consisted only of nuclei of hydrogen, helium, and traces of some other light elements, as well as of electrons and neutrinos[3]. Oxygen nuclei would come much later. Of course, the dark matter mentioned above must be added to the total matter of the universe.

This, then, was the unformed earth. And water was also unformed, since there was no oxygen yet. There were not even hydrogen atoms. Only hydrogen nuclei which were unable to bind the electrons, because of the high temperature.

The existence of free electrons and nuclei made the universe opaque. Moses describes this opaque universe as dark : and darkness was over the face of the deep. And the Spirit of God was hovering over the face of the waters. And he was right, because this universe could not transmit light. The most ancient light we have ever been able to see is that which shone a little later, when the universe became transparent.

And God said: “let there be light; and there was light”. The universe was opaque for about the first 380,000 years. But when it had reached that age, the temperature fell to about 3,000 degrees Kelvin, allowing the light nuclei mentioned above to bind the electrons, forming neutral atoms. Then, more or less suddenly,  the universe became transparent and was inundated with light. A blinding light which came from all sides, with almost the same intensity from all directions. It was like the light of noonday in the summer, where all around radiates and is burning. So the day began without a dawn! It began from midday. I do not know which of the Fathers of the Church first said this, but Saint Nikodimos the Athonite knew it and wrote: “for in this the light became not from the morning but began from midday, according to the Theologians” (ΓΥΜΝΑΣΜΑΤΑ ΠΝΕΥΜΑΤΙΚΑ εἰς τήν Ἀνάστασιν τοῦ Κυρίου, Μελέτη ΛΒ΄, α΄, σ. 273, Εκδοση 7η Βασ. Ρηγόπουλου, Θεσσαλονίκη 1991.  I’m indebted to G. Takaridis for this quote).

[1] 1 kly=1 thousand light years ≈1019 metres. This is the distance light can travel in a thousand years.

[2] One of these is the recently discovered Higgs boson.

[3] Neutrinos resemble electrons, but are neutral and millions of times lighter. We already know three of their forms.