The Creation in Science and Orthodoxy – Part III 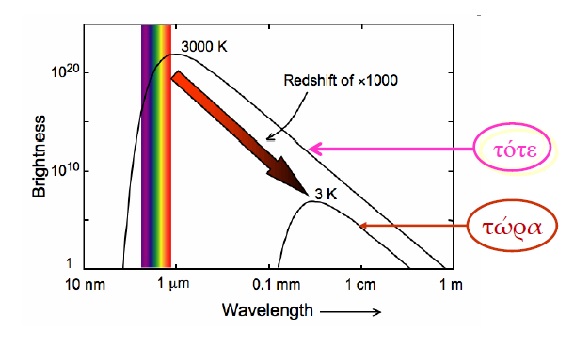 Figure 6: The brightness of the primordial light (vertical axis) as a function of its wave length, when it first shone – and now.

Today- 13.8 billion years later- it continues to reach us with approximately the same intensity from all directions. Now, however, it has left the visible region and is in the region of microwaves. So we can no longer see it with our eyes, though we can confirm its existence and study it. Its discovery in 1964, by A. Penzias and R. Wilson, played a fundamental role in the acceptance of the Big Bang theory by the scientific community. People were able to identify experimentally the light which was born at the divine command: “Let there be light”!

Let us return, however, to the period when it first shone. “And God saw that the light was good”. Why was there any need for such monitoring, which is repeated at every stage of the Biblical description? Does it perhaps imply the great instability of the whole process, which we noted above?

“And there was evening and there was morning, the first day”. As we have mentioned, with the passage of time and as the universe grew, so the wave length of the primordial light grew with it. Visually, this means that the light became increasingly red. Eventually it passed out of the optical field and was extinguished, moving into infra-red. The first eventide ended in a phantasmagorical deluge of light. 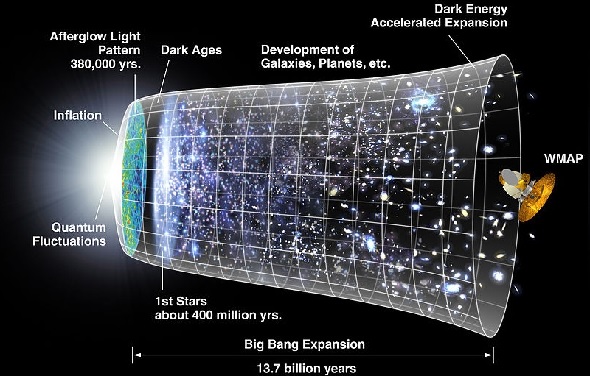 Figure 7: The history of the expansion of the universe and the birth of the stars and galaxies. The horizontal axis at the lower part denotes the time. The cross-sections of the bell at each specific time, describe the corresponding sizes of the universe.

When the night began which followed day one, the universe was about 20 million years old. During this night, the stars and galaxies were born. And our microscopic earth, the age of which is estimated to about 4.54 billion years, was also created during that same night.

The rapid expansion of space (the heavens) was initially decelerating[1], but it started accelerating at about 5 billion years ago (when the universe was about 8.8 billion years old). In other words, about 5 billion years ago, the universe began to accelerate its self-dispersal. This acceleration was caused by the dark energy, which at that time began to overcome the deceleration caused by matter. A brief description of the history of the expansion of the universe and the birth of stars and galaxies can be seen in figure 7.  The horizontal axis at the lower part of the figure denotes time. The universe itself is described by a bell-like structure, whose circular cross-sections at various times,  indicate its corresponding  sizes.

Let us repeat that, in the interpretation we are presenting here, “day one” has the structure of a night and day. It begins with darkness, though this lasts no more than 380,000 years. The bright part of the day does not begin with dawn, but at midday. Finally, the first eventide arrives, which is followed by night. The bright part of the day lasted only about 20 million years. The night which followed, however, lasted almost 9,5 billion years.

The remaining days of creation refer exclusively to events taking place on our microscopic earth. They do not concern the universe. At first sight, it would be difficult to claim that they’re of any great moment, since there’s nothing much tothe earth. But this is not the case, because these events have to do with humankind, for whom the universe was created. These days don’t have a night and day structure. All we can say is that they correspond to long periods of time, during which the main steps towards the creation of human beings took place.

Thus, the second day saw the formation of the earth and its atmosphere. On the third, the seas appeared, the dry land and the plants- first the more simple, then the more complex. Thereafter, the clouds, which covered its atmosphere (which is not murky, like that of Mars or Venus), thinned out and the stars appeared. Then on the fifth and sixth days, the fish, birds and animals were created- first the more simple, then the more complex. And everything at the command of God Who monitored every step, so that the result is “very good”.

[1] This deceleration is induced by the gravitational attraction which pulls parts of matter together. It should be mentioned though, that for a miniscule period of time, much before the end of the first second, an extremely strong acceleration, known as cosmic inflation, should have occurred.