The Holy New Martyr George from Sofia, Bulgaria,
was burned to death in Adrianople on 26 March 1437 (Great Tuesday).

The saint was a soldier of some thirty years, a strapping figure of a man, of handsome bearing, but even more handsome in his soul. He was also literate. How and why he came to be in Adrianople from Sofia we have no way of knowing. Wearing his military uniform and helmet and accoutrements, he went to a Turk [Adrianople was the capital of the Ottoman state at the time] who was a bow-maker to have him repair his weapon. But he must already have had in his heart the desire to confess. While he was waiting in the workshop to receive his bow, the man who was mending it blasphemed Christ. George, who was to become a martyr saint, reproved him roundly: 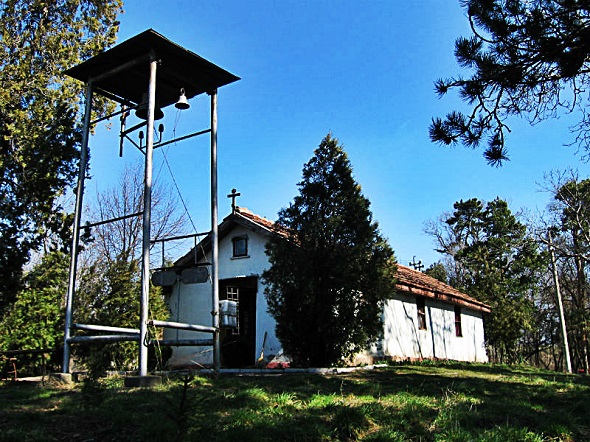 “The Lord Jesus Christ, our God, is great and unique and His wisdom is unparalleled. Yours, whom you call a prophet, can’t even be counted among the dogs. Who is like the Lord Jesus Christ our God, Who dwells in the heights and watches over the humble? One alone is Holy, One is the Lord, One is worshipped, Jesus Christ, to the glory of God the Father. Amen. What God is as great as our God? [Great Prokeimenon]. He is the sole Creator; all other things are created”.

An icon stand in the Main Church of the Monastery of Zografou, on the Holy Mountain, with an icon of the 26 Blessed Martyrs from the Monastery. In the third of the smaller icons, there is a depiction of the Holy New Martyr from Sofia.

As soon as the Turks there heard this, they set upon him. First they beat him about the face, then they wrapped the bow-string around his neck and attempted to tie his hands behind his back, but were unable to do so because the saint was so robust. And he continued to call out to them:

“I’ve said what I said. I swear to die for my Lord. I fully believe that I’ll live with Him eternally. Now if you want to put me to death or to take me to the governor, I’ll be happy to go wherever you want”.

They shackled him and took him to one of the local dignitaries, while he whispered to himself: “Blessed are the blameless in the way, who tread in the law of the Lord” and “You, Lord, see my confession; don’t abandon me”.

Standing before the official, the saint admitted the charges and spoke out even more. So the official ordered that his body be stretched out and that he be beaten and then sent on to a superior office-holder. This man asked him:

“Is it true, what I’ve heard, you accursed man?”

With great courage and zeal the saint replied: “Do you want me to hide the truth? What I said, I said. Yes, you tyrant, I said what you’re now hearing”.

And he rebuked them, again without any want of courage.

The official told him: “Repent. Confess our prophet whom you blasphemed, so that we can honour you and give you great gifts.

“Never let it be said. I confess my Lord Jesus Christ, my God and Creator, Who reigns eternally”, replied the saint.

“Look”, said the official. “The mob is asking for your death and there’s nothing I can say to them. You’ll be burned alive.

The martyr smiled and said: “I’ll be in your debt if you do me such a good turn. Order it now and I’ll kiss your hand”.

“Take him off to prison”, said the official, “till I consider what’s to be done with him”.

As they were doing so, one person beat him, another spat on him; one mocked him and another punched him. Everybody did whatever they felt like doing to him. There wasn’t anybody in the mob that didn’t do something to him. In the end, they locked him up in the castle gaol.

The next day, the teachers of Islam went to the official and complained about his tolerant attitude to the blasphemer, to someone who spoke badly of the prophet, when he should have ordered his execution.

The official then ordered the martyr to present himself, which he did without being cowed in the slightest. He was full of joy, as if he were about the present himself to the king. He counted his blessings and continued to pray.

“On the basis of the law” said the official, “you have to be scourged, and not to be burned to death, as everybody is demanding”. But when they all began to shout “Let him burn”, the official feared the people and handed him over to be burned.

They laid hold on him and dragged him to the pyre that they’d already prepared.

The saint showed no fear or cowardice, nor did he express the slightest regret. Two Turks struck him with a sword in the region of the heart, and as the earth became incarnadine with his blood, he turned to go into the fire of his own volition. But the Turks who were present impeded him, in the hope that, at the last moment, they might make him change his mind. But their words were lost like foam on the sea. So they set him in a large basket, while he was praying, and combined to throw him into the fire. At the same time, they hurled inflammable material into the blaze. First the basket was burned and then the bonds of the saint, while he himself stood upright in the flames. So, while they were stoking the fire, they cut him open with a spear and his entrails spilled out. They also threw the carcasses of animals onto the fire, so that Christians wouldn’t find his relics. The fire burned from eleven o’clock in the morning until dawn on the following day. When everything had been thoroughly burned, the ashes were dispersed in the wind, so that the Christians wouldn’t have anything to take.

And so, George, the brave confessor of Christ, received the crown of his martyrdom.

The Lord of glory also glorified the holy martyr in another- perceptible- way. While it’s true that he was burned completely and that his honourable relics were reduced to ashes, a pillar of fire appeared from the heavens for several nights over the spot where the saint had been martyred. Everybody saw it. Sometimes it appeared as a lighted candle, sometimes as a small flame, and, at other times, like a star falling from heaven, remaining for hours above the site of the martyrdom.