As the monk Prokhor tells us, the new martyr Athanasios was a Greek by origin. His father, who had converted to Islam, was a çavuş. As far as we can tell, at the time when Athanasios was born his family has probably already converted. At the age of just twelve, the young son of the çavuş abandoned his family and, at the same time, the Muslim faith, and went to the Holy Mountain, where he settled in the Monastery of Iviron. The narrator of the martyrdom makes no mention either of the place where Athanasios was born or of the person who converted him to Orthodoxy. 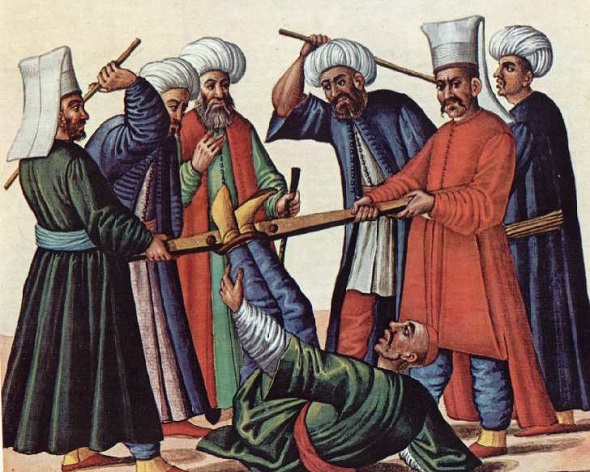 Bearing in mind the information provided at the end of the narrative, that is that the mother of the new martyr bore a part of his relics to Thessaloniki, we may conclude that his family lived in some provincial town in Macedonia or Thrace. As regards his conversion, this must have been due to the presence of an Athonite monk in his home town, from whom he doubtless heard about the Athonite state, or from a Christian childhood friend. The first supposition- that he encountered a monk from Iviron- cannot be ruled out, given that the Monastery of Iviron held dependencies in four flourishing cities at the time: Adrianople (Edirne), Didymoteicho, Melnik and Strumica. The choice of this monastery by Athanasios as the place to settle greatly strengthens this possibility, while also providing a logical explanation for this choice.

From the time Athanasios became a monk in Iviron, he stayed there eight years, but then left to return to the “world”. Bearing in mind that he was only twelve when he fled to the monastery, that he was eight years there and was martyred immediately afterwards, in 1628, it would appear that he was born in about 1608. His move to the Holy Mountain at such a young age at once gives rise to speculation that he must have had some spiritual guidance in the matter, either from a relative or from a monk of the monastery, as has been said.

It is certain that in the eight years he was in the monastery, Athanasios would have taken at least the Lesser Habit, because this would confirm the assertion of his biographer that he was a monk. The decision he took thereafter, that is to return to the world he had renounced, would certainly have had its roots in his desire to bring his parents back to Orthodoxy. This decision shows the pain he must have felt, living as he did within a Christian environment which brought people salvation, whereas his parents had renounced their faith and were numbered among those who were its declared enemies, and who, in fact, caused the martyrdom of Christians. It would have been natural for such thoughts to have plunged him into pain and shame.

When Athanasios reached the town where his parents lived, he addressed himself immediately to the “khan”, and requested that his parents be allowed to return to the Christian faith. Although this information provided by Prokhor is meagre, it nevertheless supplies us with certain valuable details. The “khan” with whom we’re concerned here, was an official title which was not in use among the Turks, denoting, as it did, a leader of the Tartars who had occupied the lands of the Russians.

So Prokhor, in ignorance of the precise title of the Turkish official to whom Athanasios had recourse, called him something else, based on his own knowledge, in the hope that it was roughly the equivalent. The other piece of information which is worth noting here has to do with Athanasios’ request to the Turkish official that his parents be allowed to return to the Christian faith. This is a reference to a principle which was observed by the Turkish administration, according to which Muslim and Christians were recorded in different population registers in censuses.

So if a Christian converted and became a Muslim, it was necessary that his name be expunged from the records of the Christian population of the town or city (the so-called tahrir defter) and be transposed into that of the Muslims. And of course, vice versa, although the conversion of a Muslim to Christianity was forbidden. [Even Jews who converted to Christianity had to pay crippling fines.] Athanasios’ request was not only refused, but, on the contrary, both his rich and harsh father and the educated emirs, did their best, with blandishments and promises, to persuade Athanasios to return to their faith.

The pressures, the tortures and the imprisonment of the young Ivirite monk which followed, on the orders of the emirs and other prominent infidel personalities, not only failed to shake his faith, but actually made it all the stronger, so that he was able to withstand his trials heroically. After the third day of dreadful tortures in prison, the governor and his guard went to see what the prisoner was about and saw two young men dressed in white sitting beside him and conversing with him. They thought that these people were Christians who’d managed to enter the prison secretly, so they went at once to tell Athanasios’ father about this development.

He, too, was of the opinion that these were ordinary people and he ran “furiously” [a Polish loan word in the manuscript] towards them to strike them, but found his son on his own. Quite distraught by this time, the callous father charged his son with being a magician and, after beating and tormenting his own son, procured the judicial order [декретомъ (decretum) in the manuscript, another Latin word betraying the Western Ukrainian provenance of the author] for the young man’s execution. After this, they took him to the market, where everything had been arranged to consign him alive to the flames. While the new martyr was praying and the flames had begun to lick at him, a great storm suddenly broke, which frightened both the unfeeling father and the harsh judge to such an extent that they both perished on the very same day.