Contemplation on the Man Bearing the Pitcher of Water

Question: In the Gospel, who is the man in the city bearing a pitcher of water? Why water, and why are the disciples told that they’ll meet him and are to follow him? Who’s the master of the house? Why don’t the Gospel writers mention his name? What is the large upper room where a table’s been laid and in which the dread mystery of the Last Supper takes place? 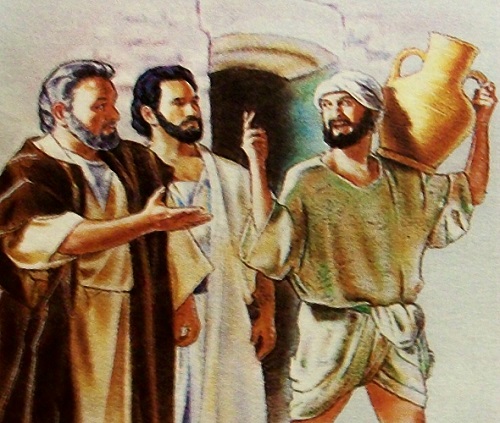 Answer:  It’s not only the name of the man to whom the two disciples were sent to prepare the Passover which isn’t mentioned in Scripture, but the name of the city, too. So, an initial attempt at interpretation might be that the city denotes the perceptible world and the man symbolizes the human race in general, to whom the disciples of God the Word are being sent. The law of the Old Testament and the law of the New are sent as precursors to prepare His mystical feast with the human race. The former, through asceticism, cleanses our nature of every stain; whereas the latter, through the mystagogy of contemplation, elevates the mind, with its cognitive power, away from the corporeal and towards visions related to what is spiritually intelligble.

An indication of this is that the disciples who were sent were Peter and John. Because Peter is a symbol of action, John of contemplation. This is why it’s appropriate that they’re met first by the man bearing the pitcher of water, who symbolizes all those who, passing through the stage of practical philosophy, bear upon their shoulders the virtues, just as, within the pitcher, and with the mortification of the earthly members of their body, they also bear the grace of the Holy Spirit which, through their faith, cleanses them of every taint.

After him, they encounter the master of the house who shows them to the upper room, where a table has been spread. He, again, symbolizes all those who, being in the stage of contemplation, have embellished their pure and elevated intellect with sublime concepts of knowledge and with dogmas, just as the upper room had been prepared, in order to welcome the great Word in a godly manner.

Finally, the house itself is permanent residence in godliness, to which the practical mind in pursuit of virtue is progressing. The lord of this permanent godliness, which is now its natural possession, is the intellect illumined by the divine light of mystical knowledge. This is why, together with the practical, the supernatural presence of the Word the Saviour is required at the feast.

The word ‘man’ is used only once in the narrative, even though it refers to two persons: the one who’s described as bearing a pitcher of water and the other who’s the master of the house. As I say, it’s used once to refer to two person, perhaps because the one nature which they have in common is divided into the practical and the contemplative, as far as godliness is concerned. The Word, Who unites them spiritually, takes them and manifests them as one.

Again, if we want to attribute what’s been said to each person individually, we won’t have strayed from the truth. Because the city is the soul of each of us, to which words concerning virtue and knowledge are constantly being sent, as were the disciples of the Word. The man bearing the pitcher of water is the patient manner and thought that keeps high on the shoulders of self-restraint the unaltered grace of faith which was granted at baptism. And the house is that state of the permanent acquisition of the virtues which has been constructed as it were from many and varied stones, that is unshakeable and bold thoughts and habits.

The upper room is the broad and spacious mind and the intellect’s ability for cognitive power, which has been bedecked with divine visions of mystical and arcane dogmas. And the master of the house is the intellect which opens wide and is adorned with the trappings of the house, which means virtue, with the height, beauty and breadth of spiritual knowledge, too. And it is to this that the Word offers Himself at a repast, having first sent His disciples, that is, the initial spiritual notions concerning nature and time.

Easter, then, is truly the coming of the Word to our human intellect, when He Who comes, in mystic manner, the Word of God, grants fulfilment to all those worthy of it, through the offer of participation in His own good things.