The term “New Martyr” was used as long ago as the time of the iconoclast controversy in order to distinguish between the martyrs of that period and those of the early centuries, though today it’s used for those martyrs for Christ who were killed after the incursion of the Ottomans into the empire of New Rome (Byzantium).

Martyrdom has been a feature of the life of the Church from the earliest years, beginning with Christ Himself, in a sense, and the Apostles, and has continued down to our own day. Indeed, it seems almost inevitable, since the Christian conscience will always be at odds with the rulers of this world, especially when their dominion is despotic and demands unwavering allegiance to the state, as well as to its “religion”, be that idolatry in Rome, Islam in the Ottoman Empire, Fascism and Nazism in Western Europe or Communism in the former Eastern bloc and the Far East. 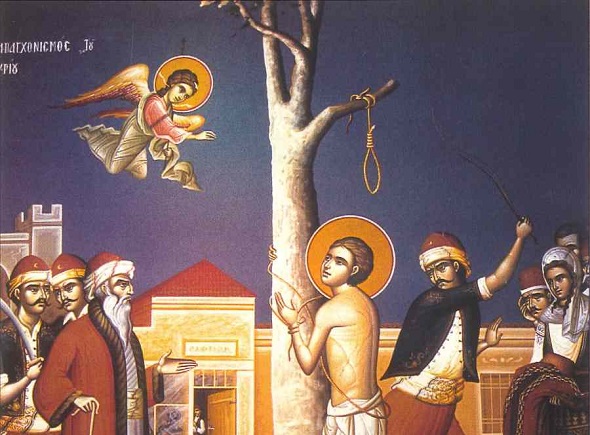 Difficult though things were for Christians at the time of the Empire of Old Rome, there was at least a common cultural background. In antiquity, Southern Italy was known as Magna Graecia from the Greek settlements there, many of them allegedly founded by heroes of the campaign against Troy who returned home to find themselves less than welcome and were forced to move on. And after the Roman conquest of Greece, usually dated to the Battle of Corinth in 146 B.C., the Roman poet Horace famously wrote “Graecia capta ferum victorem cepit” (Captive Greece captured her savage conqueror). It was this common background, which included Jews in Palestine and the Diaspora, that made it possible for Christianity to become the dominant and then sole religion in the empire of New Rome, though this was a process that took some three hundred years.

Clearly the same was not true of the Ottoman Empire. Although individuals may have maintained friendships across the cultural divide, the overall position of Christians was one of servitude. The Koran, it is true, does recognize a certain freedom of conscience and Mohammad himself seems to have been more tolerant than his later followers. Thus, forced conversions to Islam were officially illegal, but in fact the Turks resorted to a variety of ploys to effect these. Some of these would have been repulsive, such as threats and false testimony, but others, such as the promise of worldly benefits may well have been motivated by genuine, if- from our point of view- mistaken, concern. There was also a rather curious belief, supposedly attributed by Abu Musa to Mohammad himself, that any Muslim who brought a Christian or Jew to hell would guarantee his own salvation, and persuading people to apostatize was apparently, in some quarters, believed to be an effective method of achieving this goal. These conversions were largely on an individual basis, though there were mass conversions in, for example, Bosnia and Albania and among the Pomaks in the Rhodope Mountains in Greece and Bulgaria. One reason why large-scale conversion was not encouraged was because non-Muslims had to pay a poll-tax and this was a valuable source of revenue. Conversion from Islam to any other religion was punishable by death, no matter how the person concerned had become a Muslim.

A male Christian who espoused Islam, automatically qualified for certain significant privileges: exemption from the poll tax; the chance of promotion to a high administrative position; considerable economic benefits; immunity granted by the Turkish courts for any serious charges brought before he converted; improved social standing and so on.

According to Saint Nikodimos of the Holy Mountain, there were five reasons for the phenomenon of martyrdom under the Turks: a) to renew the Orthodox faith; b) to render the infidels defenceless on the Day of Judgment; c) to increase the glory of the Orthodox Church and to serve as a rebuke to the heterodox; d) to provide an example of fortitude to other Orthodox; and e) to encourage other Orthodox, particularly those who had denied Christ, to follow their example. As regards c), it’s true that the Church of Rome doesn’t officially recognize the New Martyrs as saints. However, the well-known Bollandist Delehaye, asks how they (the New Martyrs) are less than true martyrs, given that they shed their blood for the truths of our faith (Constructive Quarterly 9, 1921, pp. 701-12). And when Thomas Charles Fleuriau addressed his fellow clergy in France in 1695 he said: “All these examples of the most heroic virtues of Christendom demonstrate clearly that this country is not so sterile as people in France perhaps believe” (A. Carayon Relations inédites des Missions de la Compagnie de Jésus à Constantinople et dans le Levant au XVIIe siècle, Poitiers 186).

The New Martyrs themselves can be divided roughly into four groups. There were some- not vast numbers, to be sure, but more than might be expected- who were born Muslims and converted voluntarily to Christianity. There were 23 Turks who were martyred in Thyateira in 1649, for example, as well as Ahmet Kalfas in Constantinople in 1682 and Konstantinos from the Hagarenes in 1819. There are also quite a number of such cases in Epirus.