The second were martyred as the result of some political insurrection or challenge to Turkish rule. The best known, but not sole example of this, is the revolution of 1821, which led directly to the deaths of Patriarch Grigorios V, and also the 164 New Martyrs of Thessaloniki, many of whom were Athonite monks. It may seem that these were judicial killings rather than genuine martyrdoms, but we need to remember that, in accordance with Turkish practice, the victims could have saved themselves by converting to Islam. The fact that they chose not to is an indication that they died for the Faith and can justly be considered martyrs. 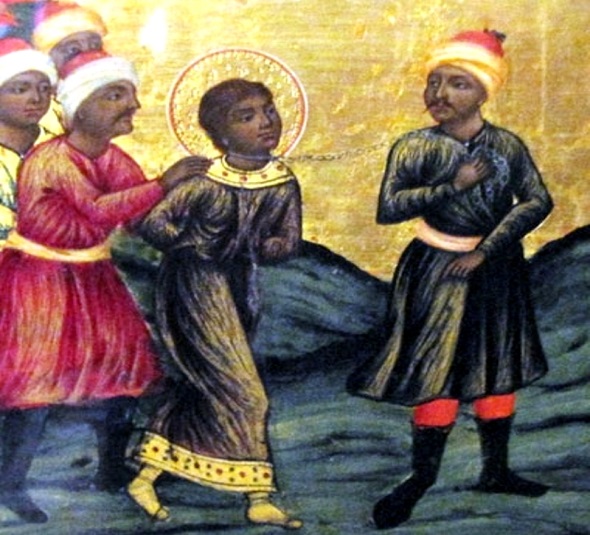 The third group consists of Christians who were imbued with an intense desire to suffer martyrdom for the love of Christ. They set out quite deliberately to provoke the Turks, knowing full well that it would lead to their death. One such, for example, was the Athonite monk, Nifon, who was given permission to preach Christ to the Turks in Thessaloniki and who was, indeed, put to death.

Finally, there were those who had denied Christ. Later they returned to the Church, often went to the Holy Mountain and prepared there for their voluntary martyrdom. Most of these had become apostates at an early age for a variety of reasons (resentment of ill-treatment at the hands of family or fellow-Christians; because it seemed a good idea at the time; financial benefits; or duress on the part of the Turks, as in the case of the Janissaries, who were taken from their families as children). In order to atone for their sin, they took the decision to confess Christ openly to the authorities, which, of course, was in itself a death sentence.

After their return to the Church, many of the apostates were associated with the Holy Mountain and made their preparations for their voluntary martyrdom there. But there were also Athonite monks who became Muslims, such as Prokopios and Athanasios from the Lavra. When these monks recognized their apostasy, they repented, confessed Christ and were martyred. A good number of them were associated with the Skete of the Honourable Forerunner, which belongs to the Holy Monastery of Iviron. This skete was founded by Saint Iakovos the Younger, from Kastoria, at the end of the 15th century. Saint Iakovos and his two disciples, Iakovos the deacon and the monk Dionysios, were martyred in Adrianople on 1 November 1519. It appears that the martyr’s death of the founder of the skete contributed to the formation of a tradition there, so it’s not surprising that eight new martyrs came from this small skete. (Of your goodness, pray for the repose of Monk Kosmas, who went to his rest in the Lord recently and who lived in the kelli dedicated to Saint Iakovos in this skete).

The main reason which motivated many of the apostate New Martyrs to arraign themselves before the Turkish authorities was their conviction that only thus could they expunge the sin of having denied Christ at some point in their lives. This is similar to the position of the Church in the earliest centuries. Whilst it’s true that, after the end of the 2nd century, the Church discouraged voluntary martyrdom, there was a certain encouragement of it for apostates, because it was considered, according to Clement the Alexandrian to be a “glorious purification” and the equivalent of baptism. So when the Blessed Martyr Akakios addressed the Turks, he explained that “through the shedding of my blood, I cleanse my most wretched body from the filth of error”.

The conviction on the part of Christians that they’re pilgrims and strangers in this world, a feeling which is always stronger when they are subject to oppression rather than when the Church is “established”, made the New Martyrs feel that their true home is in the Kingdom of Heaven. Their reference point was Saint Paul, who declared: “I am ready not only to be imprisoned but even to die… for the name of the Lord Jesus” and “My desire is to depart and be with Christ”.

Of course, it’s also true that even after Christianity became the official religion of the Roman Empire, the desire for martyrdom was not lost and, indeed, was an integral part of the ideals of monasticism, as the “martyrdom of the conscience”. But then with the iconoclast controversy, the Frankish conquest and the inroads made into Byzantium by the Turks, the martyrdom of blood, rather than of conscience, again became a reality.

There is, among certain circles in Greece, a nostalgia for the “faith of the time of the Turks”, but this, it seems to me, is misplaced. On the one hand, the “Faith” is as it always has been, so that is not an issue. The manner in which the Faith is expressed, however, will inevitably vary according to historical circumstances and perhaps our focus should be more towards seeing how we can best be “martyrs” (i.e. witnesses) to the truths of Christianity in our own day and age, when the Church is under attack in ways that it’s never before had to face. This is not to say, however, that we can’t be humbled and take courage from the example of those who were- and are- willing to die for the privilege of calling themselves Christians.