To What Purpose this Waste?

Holy Wednesday faces us with the contrast between two figures, two states of the soul. It is devoted to the remembrance of two actions: the action of the woman who, at Bethany, came to pour a jar of precious ointment on Jesus’s head, and the actions of the disciple who betrayed his Master. These two actions are not without a certain link, for the same disciple had protested against the apparent prodigality of the woman. 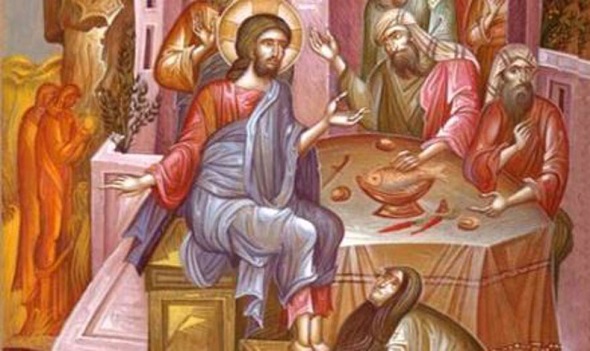 After great compline on Tuesday evening, as on the two preceding days, the ‘Service of the Bridegroom is celebrated. The chants make several allusions to the ‘ungrateful disciple’ and the ‘adulterous woman’. However, the gospel at matins (John 12, 17-50) does not touch on this episode at Bethany. It tells how, during one of his last meetings with the crowd, Jesus asks of the Father: ‘Glorify thy name’. (What a model of filial prayer this brief phrase is for us – disinterested, adoring and loving!) A voice comes from heaven and says ‘I have both glorified it and will glorify it again’. Jesus’s Passion and the Resurrection will be this glorification. Some sentences from this gospel announce the Passion directly: ‘I say unto you, except a corn of wheat falls into the ground and die, it abideth alone: but if it die, it bringeth forth much fruit…Now is the judgement of this world: now shall the prince of this world be cast out; And I, if I be lifted up, will draw all men unto me’.

At the presanctified liturgy on Wednesday we continue reading from Ezekiel (2, 3-3 ,3): God commands the prophet to go amongst men fearlessly and to tell them the divinely spoken words he has heard. We also go on with the reading from Exodus (2, 11-22): Moses, having killed the Egyptian who struck an Israelite, flees into the country of Midian, and there he marries. The last of these readings, again, is from the book of Job (2, 1-10): Satan asks God’s permission to test Job in his flesh itself, but Job, even though covered with sores and despite his wife’s provocation, still refuses to curse God. The gospel (Matt. 26, 6-16) tells of the anointing at Bethany. A woman bearing precious ointment in an alabaster box, pours it on Jesus’s head. The disciples are indignant: ‘To what purpose this waste? For this ointment might have been sold for much and given to the poor’. Jesus answers with praise for the woman’s deed: ‘For ye have the poor always with you, but me ye have not always. For in that she hath poured the ointment on my body, she did it for my burial’. Judas Iscariot, one of the twelve, then goes to find the priests: ‘What will you ye give me, and I will deliver him unto you?’ The priests covenant to give him thirty pieces of silver.

Jesus approved of the woman’s action, first because it was homage, rendered to him in anticipation of his death and burial, and then because it was an expression of great love which could for the short time of life he still had left, legitimately be shown him, whereas the poor would always be there. But can we find in these words of Jesus’s a clear directive for our own actions? It seems that we can. For one thing, Jesus blesses the woman’s prodigality because of certain very special circumstances: the fact of Jesus’s visible presence among men and of the near approach of his burial. But, now that these circumstances no longer exist, the duty is different. While we need not condemn offering riches and beauty to the service of God, it is above all through those members of the mystical body who suffer that we are able to honour its head. For it would be offensive to God if sumptuous churches were built while the poor were allowed to die of hunger.

The episode at Bethany, however, has a significance that goes further than the offering of a jar of ointment. It is not only through material goods that we can give generously to Jesus, but also by consecrating to him our intangible wealth: for example a life of prayer, an ascetic or contemplative life, or some costly sacrifice which seems useless. The world will protest, as did the disciples at Bethany: to what purpose this prodigality, this waste? Would not a normal life, devoted to the service of men, be much more use? And yet assessment of the ‘value of the loss’ remains the nerve of all religion that is truly alive. If we have the duty to do what we can in cases of real and obvious distress before concerning ourselves with cultural luxury, we have the right, in what concerns only ourselves, to pour invisible ointment on Jesus’s head – that is to say to ‘lose’ for his sake (but in reality to gain) the best of our life. Our heart is the first jar of ointment that we must break before him, for him.

The case of Judas is so terrible and obscure that we do not dare to try and explain it or enter into it. But let us keep in mind a sentence from the ‘Service of the Bridegroom’ for Holy Wednesday: ‘The ungrateful disciple whom thou hadst filled with Thy grace, has rejected it’. It is indeed possible to reject grace, even when one has been filled with it. And how many Christians are there who, during the course of their lives, have not said to their ruling passion – the flesh, money or pride: ‘I am ready to sell Jesus to you. Tell me what pleasures you will give me and I will deliver him to you’?

In many churches, the sacrament of unction is conferred during the afternoon or evening of Holy Wednesday to all believers who desire to receive spiritual or bodily relief.