Elder Evdokimos, the Last Innocent of the Mountain – Part 1 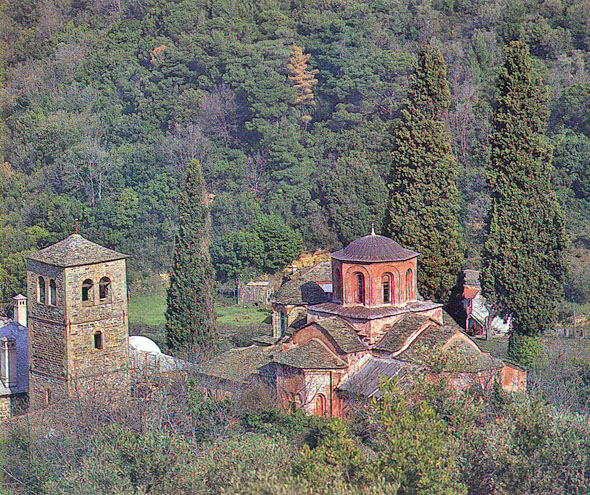 I got to know this holy man – and I mean literally holy – in the first years of my acquaintance with the Holy Mountain. He may have been the first real Athonite I came across: guileless, unaffected, unselfish, unbiased, straightforward and very simple. He was born in 1914, at Pasalimani in Propontida, and his parents were called Konstantinos and Anastasia Bitsiou. He came to the Holy Mountain as a boy of fourteen, after his parents had settled permanently in the nearby village of Ouranoupolis [At that time it was called Prosforion and was a dependency of the Holy and Great Monastery of Vatopaidi. WJL]. Even though all monastic Rules strictly forbid any beardless youth to stay in a monastery, it appears that exceptions were made, even on the Holy Mountain, which had always had a ban on women going there. If the Rule was broken it was usually in kellia, if there was a relative already there.

Elder Evdokimos had relatives in this skete of Vatopaidi, in the kelli of Saint Panteleïmon [In Athonite terminology, a kelli is either the cell of a monk in a monastery, or, as in this case, a house in a skete with fairly extensive gardens, which are held in usufruct. WJL]. Young Lefteris, as he was called at his baptism, heard that this kelli made really nice sweet batter-balls. So the lad left the village of Ouranoupolis [Prosforion], which in those days was a considerable distance from the Mountain, because there wasn’t much by means of transport- the caïques often needed to be rowed- and thus found himself in the skete, so that he could eat sweet batter-balls. Now, were the batter-balls really so good that they lured the boy away and kept him for good at the kelli, especially at the beginning of adolescence, when the devil makes us believe we’re lords and masters of the world? It seems to me that the batter-balls were a bait, a point of contact with the desert. The reality was that young Lefteris already had it within him to devote himself to God. He gave himself over entirely to Christ from his tenderest years until the time he rendered his body to mother earth. He preferred the harsh life of the skete to the comfort of the village. In those days, it was forbidden to have pack animals in Saint Dimitrios skete. The monks would go up and down to the monastery on foot with supplies on their shoulders, and this was usually the job of the younger monks.

[The Greek text was written by Abbot Gregorios of Docheiariou. He tells of how he and another eleven monks arrived at the monastery in 1980 and how they were an unusual group since they were neither zealots nor from one of the religious ‘brotherhoods’. Abbot Gregorios was keen to learn about ‘Old Athos’ and would visit kellia, often on a Sunday, on a mule, to find our as much as he could from them. I know that, apart from Elder Evdokimos, he also visited, for example, Elder Dionysios at the Vatopaidan skete of Kolchu. WJL].

Not that he was an old Athonite, an Elder who was a know-all, and we were just children. He always received us humbly, fondly, with respect and with real love. There was no dissemblance about the man at all. His smile was genuine, not false, infused with his heartfelt joy. He wasn’t somebody who would say one thing to your face and another behind your back. We had some very good times with him. Whenever we went to see him, he would set the table. Indeed, he would often hold back his own meal so that could eat together. What he mostly ate was tinned squid, with green onions and fennel.

Sometimes I would phone him, though I don’t like using the apparatus.

‘How are you, Elder Evdokimos?’

‘I’m giving way so that my brother can gain ground’.

We should keep this in our hearts: ‘I’m giving way so that my brother can gain ground’. Elder Evdokimos and the monk Ignatios weren’t actually Elder and disciple, because Ignatios had come from another kelli. His own Elders had died and he went to live with Elder Evdokimos so as not to be alone. But each of them had a different approach. Living with other people, whether in a family or in a monastery, can be a real trial. The first thing we have to get over is our own personal idiosyncrasies. We have to humble ourselves, to ‘bite the dust’ every hour of the day, if we want to get along even with wild animals, to live in peace with others, whoever they may be. Many times in my life I’ve seen this trial and mystery of people from different places and with different upbringing living together and I’ve certainly experienced it, too. Elder Evdokimos had a hard time of it with Father Ignatios, but lived at peace with him, repeating the saying: ‘‘I’m giving way so that my brother can gain ground’. And he would never heave a sigh as he said this, but always accompanied it with a sweet smile on his face.

He never judged anyone. He’d never make us think badly of another monk. At that time, before his monastery [Vatopaidi] became a coenobium again, everyone was casting aspersions at it. The Elder never did. All he said, very briefly, was ‘We’re going through difficult times; God’ll help us’.

He would note anything good, and, as an ‘Easterner’, would express himself formally in order to increase it merit. If anything was bad, he never mentioned it. He’d let it pass without comment, but his face would cloud over and be pained. He didn’t like monks talking. He wouldn’t have anything to do with a talkative monk: ‘He’s good, but he talks too much’. If ever you went to see him in his kelli, you never got the impression that he’d been missing conversation, or ‘Now that you’re here let’s have a chat’. Words weren’t his only means of expression; he had his whole presence, his whole being. He’d say more through his looks than with his words.