Elder Evdokimos, the Last Innocent of the Mountain – Part 2 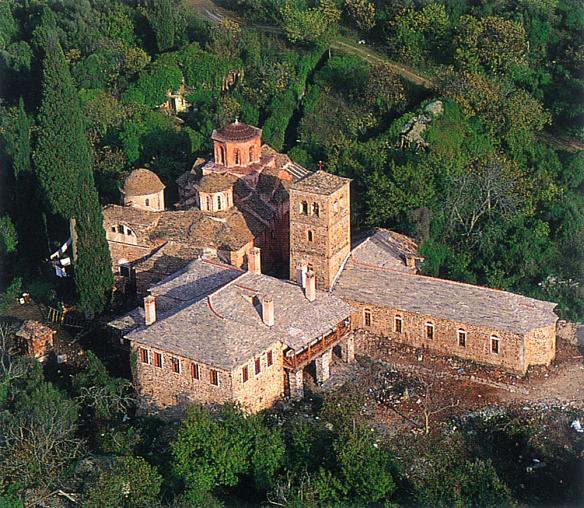 Elder Evdokimos was always gentle, and I mean gentle. People say that we who’re unmarried are irritable, that we lose our tempers easily, that we’re brusque and uncontrollably irritable. Elder Evdokimos wasn’t like that at all. He celebrated serenely and very placidly, irrespective of who was serving as deacon or chanter. And he behaved with great gentleness. The way he was when he served at the altar was the same as when he was with other people. He wasn’t one to be respectful at the altar and then discourteous to his brother afterwards. He always behaved towards other people with respect. I asked him once whether he’d ever lost his temper and he answered: ‘I don’t remember’.

When somebody stole the pots from the skete, I heard him say: ‘The nuisance; he might have left us one so that we could celebrate the feast. Did he need to take them all?’

In confession he was always serious, like a doctor examining a patient with great responsibility. After the sacrament he was always as silent as Zacharias.

He’d sometimes say: ‘People today are struggling just like others before them, but the impact of evil is more than they can manage. If God doesn’t lend a hand, we’ll all go under’.

He revered and felt very strongly about his monastery. He loved it as if it were his father’s house. Whatever the monastery said was what the Church said as far as he was concerned and had to be put into effect come what may. All the Elders of the monastery were serious and venerable. He never commented about any of them. He’d find some good in every one of them and praise it. He didn’t think anyone was useless.

Within the monastery, where he often served as duty priest, his speech was kind and his behavior courteous. He never liked being asked, especially by a monk, what this or that person was like.

‘Brother’ he’d say to me, ‘who told me to separate the wheat from the tares?’

When the new brotherhood came, he was at first cautious.

‘If I don’t think it’s good, I’ll come to your monastery. I feel more comfortable with you’.

‘No, Elder, wait and meet them first and then you can decide’.

Then later, when he saw the brotherhood expanding, when he saw that they had the monastic way about them, worship of God and service to others, he felt more at peace. Whenever we met he’d tell me enthusiastically about the way the brothers looked after him, the respect shown him by the abbot, the singing in the church. And he saw all of this as a miracle of the Mother of God.

‘We didn’t have anybody to sing. Now the church is shaking on its foundations with young voices. Isn’t that a miracle of the Vimatarissa (icon of the Mother of God which resides in the sanctuary [vima] in the monastery of Vatopaidi).

A week before his repose, I visited him in the monastery’s hospice. The monks asked if he recognized me.

‘Yes, it’s the abbot of Docheiariou’.

He was clear-sighted, lively and very observant. Let me say again, his sight was very clear. His face was shining. If you looked him in the eyes, you saw everything there is to be seen, the whole of the ascetic progression of the saints….

‘Above all else’, as Abba Isaac teaches, ‘he loved silence’, few words. He was careful in his communication with others and didn’t leave anyone harboring bad thoughts… I believe he’ll find mercy and will pray for all of us.  Elder Evdokimos had God’s enlightenment. He was a careful monk. He didn’t join in with the Elders who were prophets, or had foreknowledge of events or were miracle-workers and so on and so forth. He remained humble and his life in Christ was hidden. This is why he never had any disciples, or supporters or the cheap reputation of being a saint. He just stayed hidden behind the hill at Kryovouno. When you approached him, he gave the impression of ‘Speak, for your servant hears’…

He lived like the saints of God: humbly, quietly, calmly in complete obscurity. This is why he lived alone. No disciples, no company. His only company was Father Ignatios and the fathers and brothers of the Skete of Saint Dimitrios who had predeceased him.

It was a great sadness for him to see the skete fall into ruin. A sorrow for which there was no balm. He bore it as a heavy burden that in his day he saw the kellia closing one by one and becoming piles of stones. He thought God was abandoning us because of our sins. He loved his place. He wasn’t interested in going here and there. In any case, this was something he’d inherited from his strict Elders. They didn’t allow him to make the rounds to their neighbours, to listen to and bring news…

His garden was always well-cared and it gave its fruits in due season. The vine and the trees were a blessing. The Elders used to bring leaves in from the forest to make leaf mould. And the paths that led to the main church of the skete (the kyriako) were also testimony to hard work and a love of beauty…

At his funeral, we buried one of the last children of the Mountain. The fact that he was ninety years old did nothing to lessen our sorrow. To be honest, will we ever have ‘children of the Mountain’ again? Children who, from the beginning have been apprenticed only to their Elder? No, because now they learn at all the schools of the world and only later come to the university of Athos. And that’s good, too, but their eyes will always be clouded. Children of the Mountain love the place, they’ve got both their feet planted firmly in their kelli. They love the Elders. They love the ascetic life. They love the life of the monks. They take care of the place. ‘And they shall have pity on their dust’. They’ve devoted the whole of their lives to the Lord.

May we have his blessing and may he be an example to all of us as to how we should live. Amen!