Saint Theofanis served as the Abbot of the Holy Monastery of Vatopaidi, and was associated with Saint Maximos Kavsokalyvitis (†1365), whose biographer he was. Saint Nikodimos the Athonite translated this admirable and much-admired biography into a simpler form of Greek. In it, Saint Theofanis says: ‘As God is my witness, I do not wish to hide what I saw in the saint, because I knew him and had his company. One day I set off from the Monastery of Vatopaidi with another monk and went to his kalyva [hut or hermitage, the smallest of the dwellings on Athos, after the monastery and the kelli.

Maximos was called Kavsokalyvitis because he would burn his ‘hut’- probably no more than a lean – made of branches- before moving on to build another. When I didn’t find him there I was saddened and looked around to try and see the object of my visit. I went up a little way behind his hut and, looking along the road leading to Father Isaiah’s, I saw him at the pond [trough?] of the Herdsman, two miles away. The whole of that stretch is rocky and difficult to walk on, and there’s no straight road. But what a miracle! I saw that the saint had risen up from the ground until he was high in the air, and like a winged eagle flew above the forest and the large rocks and came to the place where I was.

And as I watched him flying in this manner, I became frightened and cried ‘How great you are, Lord’. In my fear I drew back a little and in the wink of an eye the saint arrived at where I was standing, and he was singing. What was he singing? I don’t know, because of the power of the miracle. But I fell at his feet and embraced him. He kept asking me, “How long have you been in this place?”

Then he took me by the hand and led me into his hermitage. And when he’d taught me many things and had instructed me, he said: “Make sure you don’t tell anyone what you’ve seen as long as I’m in the present life. I know that you’ll become an Abbot and the Metropolitan of Akhrida [in the Rhodope Mountains, where Peritheorio used to be, near Lake Vistonida and the Vatopaidan dependency of Porto Lago WJL]. And you’ll suffer much, but will bear it well, in imitation of Christ who was crucified on the Cross, because He wants to be of assistance to you in the temptations which will befall you as a testimony to your ascetic efforts. And all of this came to pass for me, in accordance with the prophecy of the Saint’.

It would appear that Saint Theofanis was well acquainted with the general area of Kavsokalyvia, since he knew the names of the locations, the fellow ascetics of Saint Maximos and also the other virtuous Elders, important hesychasts of the 14th century whom he names, referring also to the places where they lived. From what can be seen from his wonderful biography, he was probably closely associated with them. This biography by Theofanis was the source for all the other later biographies and hymnographies of Saint Maximos.

In accordance with the prophecy of Saint Maximos, Saint Theofanis, who was his disciple, did indeed become the Abbot of the Holy Monastery of Vatopaidi and then Bishop of Peritheorio, near Xanthi. He’s mentioned as Bishop of Peritheorio in about 1350. Not far from Peritheorio was Mount Papikio, famous for its monasteries and ascetics. Saint Maximos had lived there and had found a number of virtuous monks there, as his biographer, Theofanis records. Peritheorio was a town near the modern city of Xanthi and had been built on the ruins of the Anastasioupolis at the beginning of the 14th century. 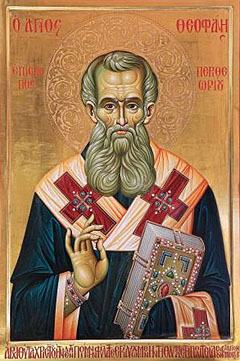 If Saint Theofanis did as Saint Maximos instructed him and didn’t write anything until after the demise of the latter, then the Life, he wrote would most probably have circulated after 1365, which is the year in which Saint Maximos is deemed to have fallen asleep in the Lord. Saint Theofanis then went to his own rest at the end of the 14th century.

‘The scrupulous effort on the part of Saint Theofanis to avoid leaving us traces and details of his saintly manner of life prevents us from knowing much about his life, activities and works. He lived in the 14th century, in Kavsokalyvia, on the Holy Mountain. He was a disciple of Saint Maximos Kavsokalyvitis, served as Abbot of the Holt Monastery of Vatopaidi and, thereafter, as Bishop of Peritheorio… His presence as Chief Shepherd in our local Church in the 14th century is certain. What is of value to all of us are his prayers for the ‘sacred remnant’ of his flock in our own dire circumstances’ (Metropolitan Panteleïmon of Xanthi, 2000).

On the initiative of His Eminence Metropolitan Panteleimon of Xanthi and Peritheorio and the Holy and Great Monastery of Vatopaidi, through Act 3401 of 11/4/2000 of the Ecumenical Patriarchate, and through Encyclical 2692 of 18/5/2000 of the Holy Synod of the Church of Greece, Saint Theofanis was added to the record of the choir of Saints of the Church.

More recently, icons of the saints have been painted and services written in his honour. His memory is celebrated on 3rd of May.