Speech by Elder Efraim at the feast of Saint Yerasimos Palladas 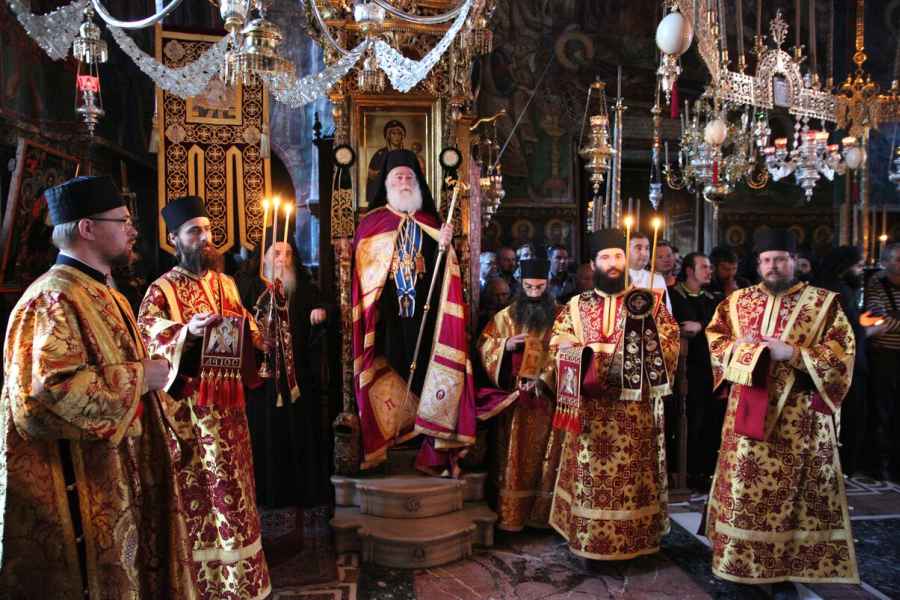 The Abbot of the Holy and Great Monastery of Vatopaidi, Archimandrite Efraim, spoke in the Great Common Room of the Monastery after the festal and Patriarchal Divine Liturgy for the celebrations of the 300th anniversary of the demise of Saint Yerasimos Palladas.

Your Beatitude, Pope and Patriarch,

Your Eminence Apostolos, Metropolitan of Militos and representative of His All Holiness the Ecumenical Patriarch Vartholomaios,

You Eminence Filoumenos, Archbishop of Pella, representative of the Patriarchate of Jerusalem,

Your Grace Epifanios, Bishop of Lidra, representative of the Church of Cyprus,

Holy Abbots of the Monasteries of Mount Athos and Venerable Holy Community,

Most Learned President of the Society of Beneficial Books, 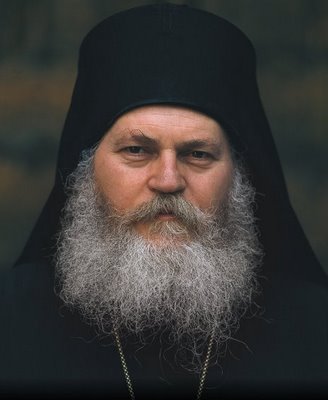 Let us praise and thank Our Lady the Mother of God and Saint Yerasimos Palladas that the Grace of the Holy Spirit has gathered us together in this place, here in the Holy Monastery of Vatopaidi, where Saint Yerasimos lived his last years and where his grace-giving skull is preserved. Yesterday evening at the Vigil and today in the Patriarchal Concelebration of the Divine Liturgy, with Byzantine splendour and in accordance with the rule of the Holy Mountain, we celebrated the 300th anniversary of Saint Yerasimos’ departure from this life, with the blessing of Ecumenical Patriarch Vartholomaios and in the presence of His Beatitude Theodoros II, Pope and Patriarch of Alexandria.

In 2002, the Patriarchate of Alexandria took the necessary steps to canonize Yerasimos Palladas, Patriarch of Alexandria, a man largely unknown, as a Saint of the Orthodox Church. We confess that we, too, were unfamiliar with him. What we did know of him was connected to our Monastery and consisted of the following:

Our predecessors had taken care to preserve the skull of the Saint in the Annex to the Holy Sanctuary in the Main Church. Alas, we do not know what happened to the rest of his holy relics, though they would clearly have been put together with those of all the other departed fathers of the Monastery in the cemetery.

In his history On the Holy and Great Monastery of Vatopaidi, which will be published shortly, perhaps as early as next month, Hierodeacon Elder Arkadios Vatopaidinos mentions that Saint Yerasimos was buried outside the Main Church, towards the right of it and that the inscription on the grave read as follows: ‘The servant of God and Most Blessed Patriarch of Alexandria Yerasimos fell asleep in the Lord in the year 1714 15th of the month of January 7th indiction’.

Moreover, in the Register-Codex of Itinerant Fathers (Cod. No. 5, book 7), between the years 1677 to 1844, mention is made, as Saint Yerasimos’ personal effects, of his omofor (pallium), his stole, his crosier and his pastoral staff, as well as cross reliquary on which the Mother of God and two six-winged seraphs are depicted. Also preserved in our Monastery is the verati or ordinance renewing his election to the Patriarchal Throne of Alexandria in the year 1704.

In 2006, Mrs. Eleni Hatzoglou wrote a doctoral thesis on the life and literary oeuvre of Saint Yerasimos. Since then we have been in touch with this outstanding scholar and with the Society of Beneficial Books, President of which is Mr. Konastantinos Manafis, emeritus Professor of the Philosophical School of the University of Athens, with a view to collaborating on an edition of the Collected Works of Saint Yerasimos. A concatenation of circumstances has delayed publication, but in the end, by God’s providence, the publication of the first volume of the Collected Works has coincided with the 300th anniversary of the Saint’s demise.

Because there was a flourishing printing trade in what was then the Principality of Wallachia, Saint Yerasimos made two visits there, the first from 1691-1693 and the second from 1707-1709. Despite his close ties with the Prince of Wallachia, Constantin Brâncoveanu, he did not live to see his works in print. This is beginning to happen now, though, in our own day, and we deem it a great blessing and responsibility to have the opportunity to complete the task. He wrote a great deal of weighty material and we estimate the Complete Works will be in 8-10 volumes.

Saint Yerasimos was not merely a scholar bishop, with ‘well-rounded’ studies in Venice in the fields of philosophy and theology, he was also fluent in Greek, Latin and Hebrew, and also combined his erudition with sanctity. Throughout the whole of his earthly life he was an untiring labourer in the vineyard of the Lord. He never boasted either of his knowledge or his virtue.

Even though he was in contact with prominent personalities of the age, he remained humble and unpretentious, free of any fawning and vanity. He was acquainted with and kept in touch either personally or through correspondence with Vartholomaios Syropoulos, Yerasimos Vlakhos, Grigorios Melissinos, Meletios Syrigos, Vissarionas Makris, Leontas Glykys, Alexandros and Nikolaos Mavrokordatos, Ioannis Karyofyllis, the Ecumenical Patriarchs Kallinikos Akarnan, and Dionysios Mouselimis, Patriarchs Dositheos and Chrysanthos Notaras of Jeruslaem, Constantin Brâncoveanu, Prince of Wallachia, Tsar Peter the Great of Russia and others.

He was elected as Patriarch of Alexandria by the Holy Synod of the Ecumenical Patriarchate, in the church of Saint George in Fanar. In a letter to the Patriarchate of Alexandria informing the flock there of the imminent arrival of their new Patriarch, the then Ecumenical Patriarch, Kallinikos II Akarnan extolled the virtues and gifts of Saint Yerasimos. He considered him a man ‘devout and well-made, for long distinguished in wisdom and action and adorned with vision, shining with bodily and spiritual attributes… and flourishing in many virtues before God, well-versed in divine matters, with experience and precise judgment, through which all his life he has been a fervent preacher of the Gospel teaching’.

Saint Yerasimos devoted himself entirely to the service of his neighbour: he taught, catechized the faithful, and tried to protect them from the prevalent heresies of the age, especially the Roman Church’s propaganda, which was particularly intense at that time. He was a just man and dealt fairly with the administrative matters of the Patriarchate, and also with the personal affairs of the faithful within his flock. Divine grace illumined and directed him in all his activities. His correspondence and the documents and encyclicals he composed to deal with a variety of issues of a pastoral and administrative nature are evidence of his good sense and wisdom. He was a man of love, of meekness, patience and faith and was very gentle in his interpersonal relations with the faithful. This is why the Christians of the Patriarchate of Alexandria, clergy and laity, went to great lengths to try to change the Saint’s decision to resign, in an effort to prevent themselves from ‘becoming orphans’, as they put it. This was an expression of the great love they had for their Shepherd.

During the many years of his service in the Church, God’s providence arranged that he undergo the trials of persecution and slander. He was deposed as Metropolitan of Kastoria by the Synod of the First Archdiocese of Justinian Ochrid. He was even slandered by his successor, Samouil, both before and after the latter ascended the throne of Alexandria. Saint Yerasimos, however, showed great tolerance, because he shared the meek, humble and placating spirit of Christ. The Saint continued to act as benefactor to his accuser and slanderer, because he had become love embodied and was unable to act against a fellow human being with any inappropriate passion. He loved his enemies as brothers, in accordance with the Lord’s commandment.

Saint Yerasimos was a placid person who had no desire to be involved in crises and rivalries. He avoided strife and, from what we know he appears to have been vigilant, an introvert who sought quietude and union with God. This is why he retired from the Patriarchal Throne of Alexandria and came to the Monastery of Vatopaidi in 1712, in order to find peace in which to live the remainder of his life.

No doubt his choice was influenced by his acquaintance with Vatopaidan monks during his long visits to the Principalities of Wallachia and Moldavia. The Monastery of Vatopaidi had the most and the largest dependencies of any other Athonite Monastery in those regions. More than sixty monasteries and sketes had been given to it as donations, and its land holdings were more than 1,300,000 stremmas [more than 32,000 acres]. As administrators of these dependencies, the monks of Vatopaidi were also engaged in intense missionary activity. It would seem incredible that in the four years that Saint Yerasimos stayed in Moldo-Wallachia he would not have had any contact with monks from Vatopaidi. For many years, indeed until the end of his life, the Saint kept up correspondence with Nikolaos Mavrokordatos, the Prince of Moldavia, who had granted dependencies to Vatopaidi. He also knew Ecumenical Patriarch Kyprianos, who also went to find peace in Vatopaidi in 1709. In 1712, then, Saint Yerasimos came across Kyprianos in Vatopaidi and they became spiritual brothers of the Monastery. So it was not by chance that Saint Yerasimos decided to find peace in the Holy Monastery of Vatopaidi. He was fully aware of what he was doing, and acted after much thought, prayer and attention, which were features that characterized the Saint. He was not given to thoughtless actions, but always wise and heedful in his behaviour.

Here in the Monastery, where conditions are best suited for people to become sanctified, in an atmosphere of freedom from care, with a continuous life of worship and unceasing prayer, he would have garnered the sweet fruits of quietude, his pure heart would have been laved with Divine Grace. Despite his age, he took a great interest in the Monastery and sought financial support for its needs from his acquaintances among the hierarchs, such as Chrysanthos of Jerusalem, who were generous in their response. In his last letter to Saint Yerasimos, just a few days before his demise,  on 11 January 1714, Nikolaos Mavrokordatos testifies that the Saint was adorned with a myriad virtues, that his spirit was ‘warm and vital’ and that he, Mavrokordatos was certain that Yerasimos would be reckoned with the Saints as a God-bearer. Alas, there is no surviving evidence in the Monastery Archive for the period when Saint Yerasimos was living with us, though this must have been a blessed time. The well-known Cesare Daponte, a monk of Xiropotamou witnessed the fact that, on their disinterment, the Saint’s holy relics gave off a supernatural fragrance, a sign of his holy life.

Throughout his life, Saint Yerasimos Palladas was a real monk and he lived the monastic life in full awareness. Although he ascended the high Patriarchal Throne of Alexandria, he never lost his monastic conscience and wished to end his earthly life, to fall asleep in the Lord, as a monk, which is why he resigned from the Throne and came to the Monastery of Vatopaidi. He fought the ‘good fight’, was cleansed of the passions and for this reason was sanctified. It is our humble wish that Saint Yerasimos may inspire the ‘good fight’ in us, too, the last of monks, and in all those who have taken part in and experienced this splendid celebration.

We would like to thank most warmly His Beatitude Theodoros II, Pope and Patriarch of Alexandria, His Eminence Apostolos, Metropolitan of Militos, representative of the Ecumenical Patriarchate, their Eminences the representatives of the Patriarchate of Jerusalem and of the Church of Cyprus, the other Archpriests, the Abbots of the Monasteries of the Holy Mountain, the Holy Community of Mount Athos, the President and Treasurer of the Society of Beneficial Books, and the Chanters who responded so willingly to our invitation and made the effort to come and participate in the celebrations here in our Monastery for Saint Yerasimos Palladas.