The holy Great Martyr Irene was born in the city of Magedon in Persia during the fourth century. She was the daughter of the pagan king Licinius, and her parents named her Penelope.

Penelope was very beautiful, and her father kept her isolated in a high tower from the time she was six so that she would not be exposed to Christianity. He also placed thirteen young maidens in the tower with her. An old tutor by the name of Apellian was assigned to give her the best possible education. Apellian was a Christian, and during her lessons, he told the girl about Christ the Savior and taught her the Christian Faith and the Christian virtues. 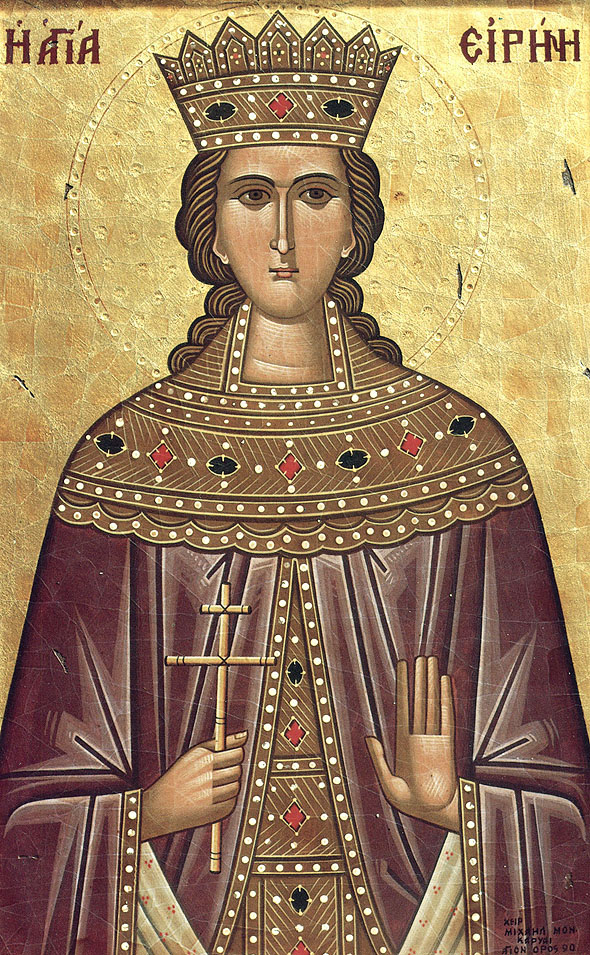 When Penelope reached adolescence, her parents began to think about her marriage. One day, a dove flew through the window carrying an olive branch in its beak, depositing it upon a table. Then an eagle swooped in with a wreath of flowers in its beak, and also placed it upon the table. Finally, a raven flew in carrying a snake, which it dropped on the table. Penelope was puzzled by these events and wondered what they meant.

Apellian explained that the dove signified her education, and the olive branch stood for the grace of God which is received in Baptism. The eagle with the wreath of flowers represented success in her future life. The raven and the snake foretold her future suffering and sorrow.

At the end of the conversation Apellianus said that the Lord wished to betroth her to Himself and that Penelope would undergo much suffering for her heavenly Bridegroom. After this Penelope refused marriage, was baptized by the priest Timothy, and she was named Irene (peace). She even urged her own parents to become Christians. Shortly after this, she destroyed all her father’s idols.

Since St. Irene had dedicated herself to Christ, she refused to marry any of the suitors her father had chosen for her. When Licinius learned that his daughter refused to worship the pagan gods, he was furious. He attempted to turn her from Christ by having her tortured. She was tied up and thrown beneath the hooves of wild horses so that they might trample her to death, but he horses remained motionless. Instead of harming the saint, one of the horses charged Licinius, seized his right hand and tore it from his arm. Then it knocked Licinius down and began to trample him. They untied the holy virgin, and through her prayers Licinius rose unharmed in the presence of eyewitnesses with his hand intact.

Seeing such a miracle, Licinius and his wife, and many of the people, (about 3000 men) believed in Christ and turned from the pagan gods. Resigning his administrative duties, Licinius devoted himself to the service of the Lord Jesus Christ. St. Irene lived in the house of her teacher Apellian, and she began to preach Christ among the pagans, converting them to the path of salvation. 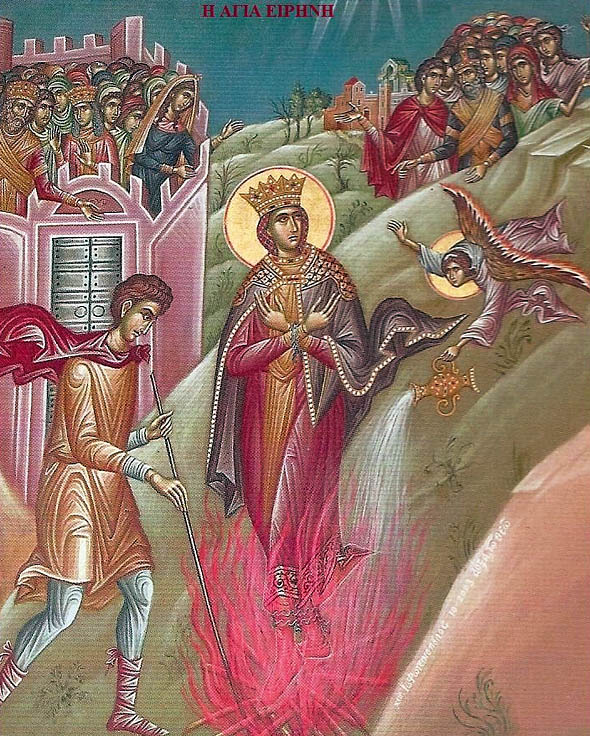 When Sedecius, the new governor of the city, heard of this miracle he summoned Apellian and questioned him about Irene’s manner of life. Apellian replied that Irene, like other Christians, lived in strict temperance, devoting herself to constant prayer and reading holy books. Sedecius summoned the saint to him and urged her to stop preaching about Christ. He also attempted to force her to sacrifice to the idols. St. Irene staunchly confessed her faith before the governor, not fearing his wrath, and prepared to undergo suffering for Christ. By order of Sedecius she was thrown into a pit filled with vipers and serpents. The saint spent ten days in the pit and remained unharmed, for an angel of the Lord protected her and brought her food. Sedecius ascribed this miracle to sorcery, and he subjected St. Irene to many other tortures, but she remained unharmed.

[“King Sedechias then wanted to saw her in half but the saw rebounded from her body as from stone. After that, the same king tied her to a wheel under a water mill and released the flow of water hoping, in this manner, to kill her. But the water refused to flow, rather stood still and the virgin remained alive and well. King Sapor, the son of King Sedechias, shod her feet with nails, loaded a sack of sand on her, harnessed her and ordered that she be led like an animal far outside the town. “Truly, I am a beast before You, O Lord!” said the holy martyr, running bridled behind her torturers. However, an angel of God shook the earth and the earth opened up and swallowed her torturers.”

Under the influence of her preaching and miracles even more people were converted to Christ, and turned away from the worship of inanimate idols.

Sedecius was deposed by his son Savorus, who persecuted Christians with an even greater zeal than his father had done. St. Irene went to her home town of Magedon in Persia to meet Savorus and his army, and ask him to end the persecution. When he refused, St. Irene prayed and his entire army was blinded. She prayed again and they received their sight once more. In spite of this, Savorus refused to recognize the power of God. Because of his insolence, he was struck and killed by a bolt of lightning.

After this, St. Irene walked into the city and performed many miracles. She returned to the tower built by her father, accompanied by the priest Timothy. Through her teaching, she converted five thousand people to Christ.

Next, the saint went to the city of Callinicus, or Callinicum (possibly on the Euphrates River in Syria). The ruler of that place was King Numerian, the son of Sebastian. When she began to teach about Christ, she was arrested and tortured by the pagan authorities. She was placed into three bronze oxen which were heated by fire. She was transferred from one to another, but miraculously she remained uninjured. Thousands of idolaters embraced Christianity as a result of this wondrous event.

Sensing the approach of death, Numerian instructed his eparch Babdonus to continue torturing the saint in order to force her to sacrifice to idols. Once again, the tortures were ineffective, and many people turned to Christ.

Christ’s holy martyr then traveled to the city of Constantina, forty miles northeast of Edessa. By 330, the Persian king Sapor II (309-379) had heard of St. Irene’s great miracles. To prevent her from winning more people to Christ, she was arrested, beheaded, and then buried. However, God sent an angel to raise her up again, and she went into the city of Mesembria. After seeing her alive and hearing her preach, the local king was baptized with many of his subjects.

Wishing to convert even more pagans to Christianity, St. Irene went to Ephesus, where she taught the people and performed many miracles. The Lord revealed to her that the end of her life was approaching. Then St. Irene left the city accompanied by six people, including her former teacher Apellian. On the outskirts of the town, she found a new tomb in which no one had ever been buried. After making the Sign of the Cross, she went inside, directing her companions to close the entrance to the cave with a large stone, which they did. When Christians visited the cave four days later, they did not find the body of the saint.

Apellian returned after only two days, and found the stone rolled away and the tomb empty.

Thus did God glorify St. Irene, who loved Him and devoted her life to serving Him. Although many of these miracles may seem improbable to those who are skeptical, nothing is impossible with God.

St. Irene led thousands of people to Christ through her preaching, and by her example. The Church continues to honor her memory and to seek her heavenly intercession.

The holy, glorious Great Martyr Irene is invoked by those wishing to effect a swift and happy marriage. In Greece, she is also the patron saint of policemen. St. Irene is also one of the twelve Virgin Martyrs who appeared to St. Seraphim of Sarov (January 2) and the Diveyevo nun Eupraxia on the Feast of the Annunciation in 1831. By her holy prayers, may the Lord have mercy upon us and save us.”

And as St. Nikolai says in the Prologue:

“Thus, St. Irene, by her suffering and miracles converted over one-hundred thousand pagans to the Faith of Christ.”

May St. Irene intercede for all of us and help us!