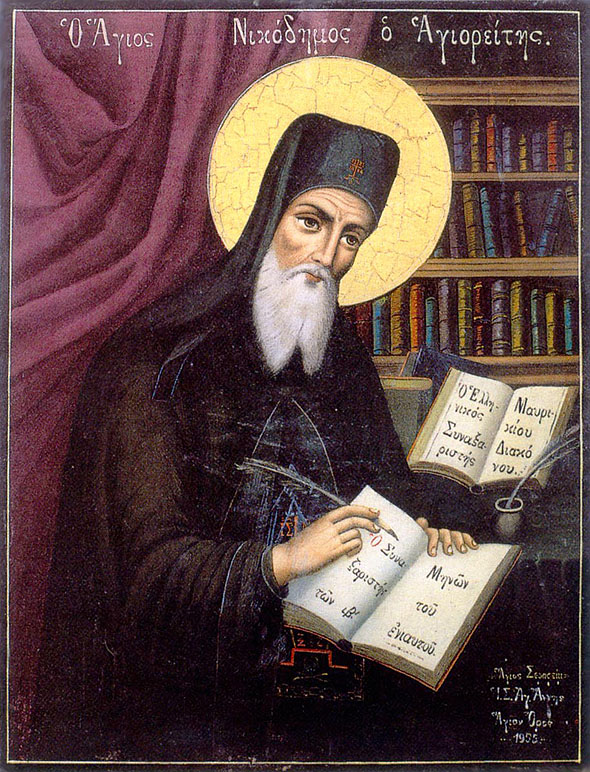 The Liberals, Anti-Kollyvades, have used all the illicit means available against Kollyvades. Namely, slanders, accusations and smears. They even resorted to murder. The monks from Ayia Anna called some renowned thief to murder four of the Kollyvades: Hieronmonk Paisios, the calligrapher and his elder, Theofanis, hieronmonk Agpaios, the Cypriot and hieronmonk Gabriel. The thief managed to drown two of them: Paisios and Theofanis.

The Kollyvades‘ teaching was genuinely patristic. Their main objective was to convince people through their words and deeds, to adopt an internal life in Christ. They targeted their efforts on the issues of the holy worship. They cherished the liturgy and advocated frequent participation in the Holy Communion- namely the frequent participation in the mystery of the holy Eucharist after continuous effort and preparation. They promoted the strict observance of the rituals of the Church, because this safeguards the spiritual balance in the life of the Church. They also advocated reading Patristic writings because it enables the faithful to acquire a genuine patristic mindset.

The three Kollyvades Saints- Nicodemus the Hayiorite, Athanasius Parios and Macarius Notaras- have interpreted passages from the Holy Scriptures and from the Fathers of the Church, wrote biographies and liturgies in honor of Saints and even schoolbooks on grammar, rhetoric and philosophy. Many Kollyvades have also copied books by foreign writers and translated contemporary, western philosophers. They either did not avoid contact with modern ideas, by incorporating modern views and methods into Patristic teachings, or criticized them altogether. The shrewd Evgenios Boulagaris- who may easily be associated with the Kollyvades, even though he did not actively participate in the movement since after 1762 he was in Leipzig and later in Russia – was deeply knowledgeable of the contemporary spiritual movements and critically assessed them in the light of the Patristic tradition.

What was foremost in the minds of the Kollyvades fathers was to awaken the enslaved nation to stand up for its faith and the traditions of its Fathers and to safeguard the Greek Orthodox culture and their lives in Christ. St Nicodemus wrote twenty five enormous treatises. Among them one distinguishes the “Symbouleytikon Egheiridion (Advisory Manual) which he wrote while exiled in the island of Skyropoyla. His life then was filled with difficulties and hardships and was lacking even the rudimentary necessities and of course books.

He uses plenty of patristic passages from memory in his book; this proves this great Father’ enormous ability to commit to memory as well as the presence of Grace. This treatise is a manual for anyone, who wishes to experience life in Christ, tries to control his senses and practices the mental prayer along with everything else which contributes towards the spiritual perfection of the person. St Athanasius Parios, who is regarded as the feistiest of the Kollyvades, wrote 53 treatises. He especially fought against the atheist movement of Voltaire: the delusion which has tried to enter the Greek orthodox realm under the guises of Enlightenment, natural religion and rationalism but in effect was hiding atheism.

In addition the Kollyvades were the spiritual fathers of the new martyrs. They had the duty to prepare and psychologically support towards martyrdom those who had initially forsaken their faith but having repented and been replenished with divine Eros, were eagerly seeking martyrdom and were insisting to follow this road. St Macarius Notaras had “spiritually prepared” and contributed towards igniting the ‘divine flame’ of the love of Christ in the hearts of three great new martyrs: Polydoros from Nicosia, Theodor of Byzantium and Demetrius from Pelloponisos. The blood of the new martyrs rose in the face of the Lord like a fragrant incense which brought freedom to the enslaved nation. St Nicodemus collected the biographies of several such new martyrs in his book “Neon Martyrologion”.

The regenerating movement of Kollyvades had decisively strengthened and stimulated the educational system of the enslaved nation, preserving the self-awareness of the orthodox peoples not only against the Ottoman occupiers but also against western missionaries, who had been scouring the orthodox countries, illicitly proselytizing, but mostly exploiting peoples’ ignorance, poverty and their lack of freedom. St Kosmas Aitolos said that God had allowed the occupation of the nation by the Turks and not the Catholics because the latter were going to change its faith. “The Turk”, stressed St Kosmas, “gives you what you want if you give him some monies”.