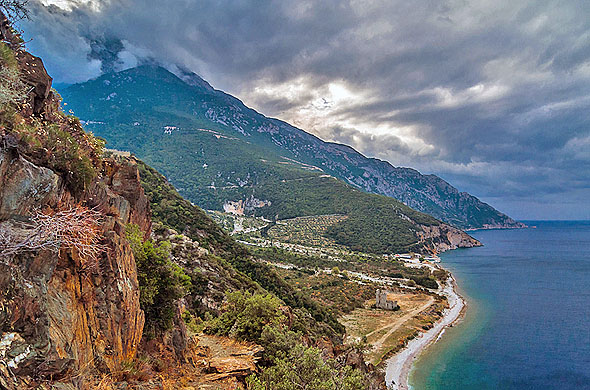 In the 19th Century, the spirit of the Kollyvades became the antibody against the spirit of change in Orthodox monasticism which had been adopted by westernized advocates- politicians and theologians- like Adamantios Korais and Fr. Theoklitos Farmakides.

However, even nowadays there is an undercurrent motion working against the Kollyvades spirit, against the spirit of the Fathers. The threat which favors the secularization of our Church is real. Many people advocate the need to shorten the services, to simplify the language of the Holy Liturgy, to limit the days for fasting and of the feasts and abolish the temple inside the churches. Many think that it is a delusion to practice the mental prayer, to use the praying rope or to take the Holy Communion frequently.

At the same time, more and more theological movements are being created, while others continue to exist throughout the life of the Church, but essentially exist outside the Church. We might say that there are some tendencies in the theological circles which nowadays promote a similar way of life.

The first such tendency is that of the so-called eusevians, the moralists. The advocates of such tendencies, who have existed throughout the life of the Church, place the emphasis on the external form; they exhibit a moral life externally, but basically they do not know what it means to attain the purity of the heart. They focus on the letter and do not permeate the essence. They believe that man’s deification is a moral and not an existential issue; namely man’s genuine participation in the uncreated energies of God.

The second tendency is exhibited by those who advocate the so-called theology of the senses. They are highly intellectual people, prominent figures in the arts, poetry and music. They would like to link theology and art, so that theology becomes the nurturer of art. That is, to render the theology of our Church more poetic, more literary and more musical. Let us stress, however, that Orthodoxy and therefore, theology, does not belong to the Arts or Culture, but it creates art and culture. The arts and even our own lives must be connected with the Church in order to collect the «living water» (John 4, 10).

The third tendency is that of the traditionalists. They concentrate on the letter of the Patristic tradition but they change it in practice. They do not believe that Tradition is the natural and dynamic continuation of the Church. They identify themselves with its glorious past but they do not practice Tradition in their lives. They are the ones acquainted with the orthodox theology but do not practice it. They constantly speak about the need to return to the traditions and to our Fathers, but they have never experienced the divine Grace which had resided in the Fathers and inspired their every word and deed. Thus, they are proved to be fakes or as Paul the Apostle said: they are like “tinkling cymbals” (1Corinthians 13, 1).

The fourth tendency is the one advocated by those who speak about the present day theology (παροντική θεολογία). They move the centre of attention from theology to anthropology and sociology. They support the idea that Patristic theology has come to an end; they are trying to establish a new theology which will tackle social problems since they believe that these cannot be solved by Patristic theology. They believe that the word offered by the Church is constrained and static and they do not accept that eschatology is feeding the Church; that the history of the world acquires its meaning because of eschatology.

Nevertheless, there are many people lately who have acquired a deeper knowledge of the Patristic tradition, particularly of Hesychasm as the genuine practical experience. This experience is none other than the application of the Scriptures in our times; namely, the experience of divine Grace which assures that one is productively integrated in the Body of the Church where he experiences the fullness of the true life and indefeasible joy in his communion with other persons. Then man becomes an ecclesiological and thankful being, a true person in the image of the absolute and eternal person, Christ.

We may endeavor to say with certainty that those who belong to the aforementioned four categories have acquired an intellectual relationship with God, became complacent and think that they know God. But they have not accomplished communion with God which relates to their whole existence and particularly with the noetic energy in their hearts; neither have they accomplished any substantial communion with their brother.  The holy Kollyvades Fathers stressed that the spiritual centre of the person is the heart and not the brain. That’s where all the mysteries of the unseen war are taking place, of our regeneration and where divine Grace dwells. St Nicodemus the Hayiorite says that a man’s heart is a physical (φυσικό), beyond nature (παραφυσικό) and above-nature (υπερφυσικό) centre. Christ, Himself, reveals to us that “the Kingdom of God is within you” (Luke 17, 21). Kollyvades were insisting in the frequent participation in the Holy Communion because they knew that with Christ’s Body in the Holy Eucharist, the divine is inexpressibly and inseparably united with human nature, man experiences the common nature of mankind and the mystery of deification is accomplished.

People who experience and offer a fake and impure Orthodoxy must coordinate with the life-giving Patristic tradition, which is advocated by the Kollyvades of the 18th Century, the Hesychasts of the 14th Century; namely, the Fathers of our Church.  Thus Kollyvades once again become our spiritual guides to the proper course inside the genuine Patristic tradition.

The spirit of the Fathers remains always the same. However, depending on the social, political and cultural conditions of the times, the Fathers experiencing divine Grace, i.e. the communion with the personal God, express their views in line with the ongoing arguments by the philosophical, theological and social tendencies of those times. The way the dogmas are being expressed and the way the path to repentance is being explained depends on the current dynamic terminology without  altering the essence of the Evangelic preaching which has always been: “repent, the Kingdom of Heaven is at hand” (Matthew 3, 2).