Throughout the history of the Church, the Holy Spirit has been endorsing some spiritual figures who not only leave their mark in their times but also become illuminating beacons for the future generations. Therefore, by looking up to them, we “the ones who have reached the end of ages” are able to sail through the seas of tribulation, of passions and of the devil’s delusions without danger, without “wetting our feet” to reach the port of the “true life”, of impassion, of Sabbatism and thus accomplish our deliverance. Such personalities were the Three Hierarchs, St Maximus the Confessor, St Simon the New Theologian, St Gregory Palamas as well as the Fathers of the Kollyvades movement. 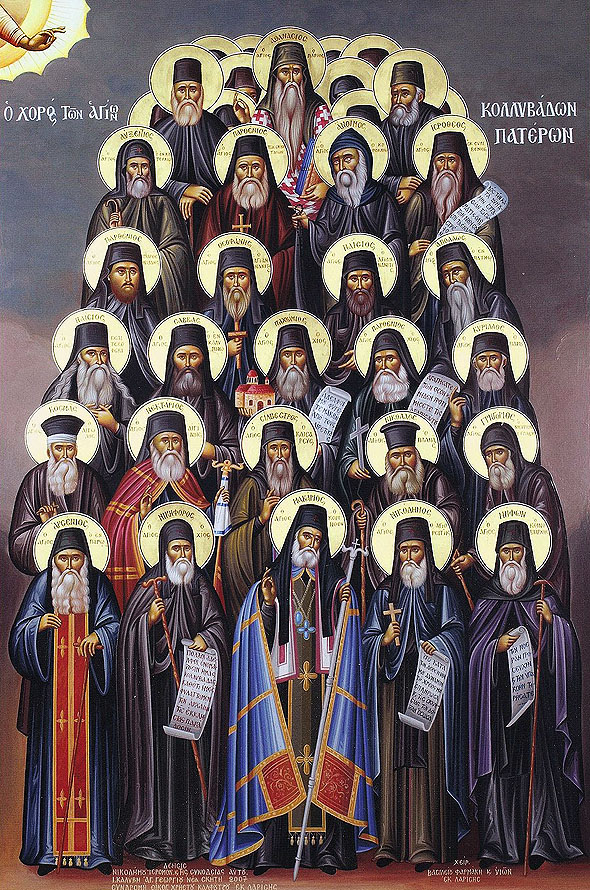 The presence of the Kollyvades during the 18th Century in the Holy Mountain and generally throughout Greece has caused an active return to the roots of Orthodox Patristic Tradition.

The forerunners to this movement have been sarcastically described by their adversaries in the Holy Mountain as ‘Kollyvades’, because they had opposed the untraditional practice of transferring the memorial services for the deceased from Saturday to Sunday; the latter were correct in arguing that by transferring these services would insult to the Festal Day of the Resurrection.

More specifically the reason for the movement was provided by the monks of the Skete of St Anne’s in the Holy Mountain. In 1754, these monks had been trying to rebuild the central church of the Skete, the Kyriakon. But because they had to work on Saturday, they decided not to carry out the memorial services for the deceased on that day as they were traditionally held throughout the Holy Mountain, but on Sunday after the Divine Liturgy. This decision which contravened  the Ecclesiastical tradition has tempted hierodeacon Neophytos Kausokalybytis , who was at the time teaching at the Athoniada School- which the Holy Monastery of Vatopedi had recently established in 1749- and launched a dogmatic battle against the monks of St Anne. Hierodeacon Neophytos was established as the forerunner of the Kollyvades movement.

Indeed the actual day that the memorial services were to be held constituted only a minor detail in the entire revitalizing and traditional mission of the Kollyvades’ movement. It had simply been deliberately exaggerated by their opponents, the so- called Anti-Kollyvades or Liberals, not only to bury their entire contribution but also to denigrate them as monks because they had been supposedly concerned with minor and immaterial things, like the memorial services and the kollyva. In the same way, the Maccabees because they hadn’t obeyed King Navouchodonosor on a minor detail, namely to eat pork forbidden by their Fathers’ tradition, had been terribly tortured and became Martyrs and genuine confessors of their Fathers’ faith; we venerate them as Saints of our Church. The confessionary aspect of our orthodox faith is not only expressed dogmatically but also in the context of morality and tradition.

Another cause for the appearance of the Kollyvades movement was presented by the publication of two books, the first in 1777 and the second in 1783, which dealt with the need to take Holy Communion often and had been produced by the Kollyvades’ circle. The second book, written by St Nicodemus the Hagiorite and St Macarius Notaras, bishop of Korynth, has been condemned by the Patriarchate in 1785, because it was allegedly causing strife and scandals. Later on, the Patriarchate presented the same book as beneficial and contributing to the salvation of the soul. With an official Patriarchate letter, endorsed by the Holy Synod, the writers were exonerated.

From the outset, all the teachers at the Athoniada School had expressed their support to Neophytos Kaysokalybytis; among them St Athanasius from Paros, Christopher Prodromitis from Arta, hieromonks Agapios from Cyprus, Jacob from Peloponissos, Parthenios the Hagiographer and Paisios the Calligrapher. Let us pay specific attention to Agapios the Cypriot, among the forerunners of the movement, who did justice to our island, “the island of the saints”. Later, St Nicodemus the Hagiorite, the great Saint and wise tutor of the Greek people, joined the movement together with St Macarius, bishop of Korynth, a descendant of the famous Notaras family and hieromonk Dionysius from Siatisti, the spiritual father of the Vatopedi Skete of St Demetrius and his acolyte, hieromonk Ierotheos, the spiritual father at Protato at the Holy Mountain.

The main exponents of the Kollyvades’ movement who in the 18th century have created a revival of the pursuit of virtue (‘φιλοκαλική αναγέννηση’) inside the Orthodox Church were :Athanasios from Paros, Nicodemus the Hagiorite and Macarius from Korynth. These people, because of their activities and their sacrifices, but mostly because of their pious and exemplary lives in accordance with the Patristic spirit, have been appropriately ranked among the Saints of our Church.