Heralded as the first Christian emperor, Constantine the Great is recognised as the ruler who ended Christian persecutions, changed an entire empire’s religion, and founded a new capital city to the east of the once all-powerful Rome. It is not surprising that, due to these achievements, modern-day historians consider this fourth century emperor to be “one of the outstanding men of Rome’s declining years. One of the first areas of debate concerning Constantine is the events that led to his conversion to Christianity. Lactantius and Eusebius of Caesarea underlined that the cruciform symbol seen in the sky and in Constantine’s dream was the basis for being Constantine Christian. Through their writings, we will try to show that Constantine believed in Christ and became Christian, because he believed that Christ was the real God. 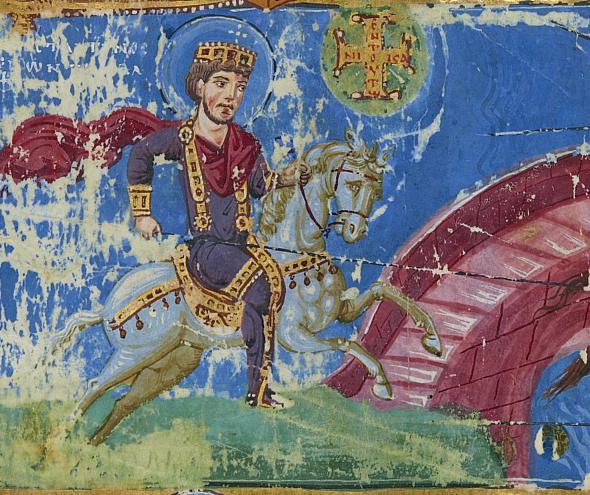 Were their actions for Christianity only political or only religious or both of them? Did Lactantius and Eusebius try to cover-up, gloss over, or not address the emperor’s contradictory religious actions? We don’t refuse the fact that during his reign, Constantine was involved in a number of events that appear to contradict his religious beliefs but according to our opinion it is clear that Constantine had been sincere in his beliefs. Of course, he was guided by political necessity as well as religious fervor. Through our paper, we will present his portrait as political and religious person and we will underline the facts that historians and Church based on for calling Constantine Great, Saint and equal to Apostles.

The Christianity and Constantine the Great

C. Flavius Valerius Constantinus was born at Naissus, Nis in Serbia. He was the son of Constantius Chlorus, who later became Roman Emperor, and St. Helena, a woman of humble extraction but remarkable character and unusual ability[1]. Helena was a daughter of an inn keeper. The date of his birth is not certain, being given between 274 and 288. Constantine I or Saint Constantine, was the Roman Emperor since 306 to 337. Well known for being the first Roman emperor to convert to Christianity, Constantine issued the Edict of Milan in 313, which proclaimed religious tolerance of all religions throughout the empire[2]. Today, some historians support that there was no official Edict but only Licinus’ and Constantinus’ decisions about the religion[3].

The Edict did not only protect Christians from religious persecution, but all religions, allowing anyone to worship whichever deity they chose. A similar edict had been issued in 311 by Galerius, then senior emperor of the Tetrarchy; Galerius’ edict granted Christians the right to practice their religion without causing any troubles « Ut denuo sint Chrsitiani et conventicula sua componant, ita ut ne quid contra disciplinam agant» but did not restore any property to them[4]. On the contrary, the Edict of Milan consisted of many clauses which stated that all confiscated churches would be returned as well as other provisions for previously persecuted Christians[5]. Neither Constantine nor Licinius proclaimed Christianity as official religion[6].

In 324, after the defeat of Licinius and his death, Constantine’s autocracy began. The insight and acumen of his character led him to take two important decisions, which changed the history of the Roman Empire until then. His first decision was the adoption of Christianity as the official religion of the Byzantine state and the second was the transfer of the capital of the Empire from Rome to a new city. It was built on the site of ancient Byzantium and its name was Constantinople. This city was the new capital of the Empire, New Rome[7].

Since 320 Constantine was constantly supporting Christianity by financial aid and benefits or tax relief to Christian Church. After the recognition of Christianity as religio licita, Constantine the Great conferred the civil audentia episcopalis on the bishop. Thereby the bishop judged not only in virtue of his spiritual authority but also on the strength of imperial authority[8]. Although, Constantine was defending and supporting the Christian religion, he was baptized Christian before he died. Typically he remained as Pontifex Maximus for political reasons and for maintaining peace and harmony in relations between pagans and Christians[9].

*Interdisciplinary Symposium Constantine and the Grandeur that was Rome University of Oxford, Kellogg College, December 11-13, 2013

[7] Hermias Sozomenos Philostorgius, Ecclesiastical History, II, 3, p. 51: «… God appeared to him (Constantine) by night, and commanded him to seek another spot. Led by hand of God, he arrived at Byzantium in Thrace, beyond Chalcedon in Bithynia, and here he was desired to build his city and to render it worthy of the name of Constantine. In obedience to the words of God, he therefore enlarged the city formerly called Byzantium… He named it New Rome and Constantinople, and constituted it the imperial capital for all…»

[8] «If proceedings were to be taken before the bishop, the agreement of both sides was requisite (see Codex Justinianus 1.4.7 from the year 398 and Codex Theodosianus 1.27.2 from the year 408). By Novellae 79 and 83, Emperor Justinian placed the clergy and monks under episcopal jurisdiction in civil affairs. According to Novella 86.2, the bishop, upon rejection of the state judge, was to decide the case in conjunction with the rejected judge. This administrative activity of the bishop in civil law as a justice of the peace can be distinguished only with difficulty from his purely ecclesiastical disciplinary function», http://ccdl.libraries.claremont.edu/cdm/singleitem/collection/cce/id/278/rec/20 (2012)