Eusebius’ views for the Reign of Constantine the Great

Eusebius’s history was not written simply to record the deeds of the church after Christ’s ascension; he wanted to show that Christianity, with Constantine’s conversion, was the pinnacle of humanity’s long climb. The church had been an oppressed minority, but now it could enter a period of peace. Eusebius was a very important figure in the church of his day. He was not a great theologian nor a profound thinker, but he was the most learned man of his age, and stood high in favour with the emperor Constantine[34]. During the Arian controversy, he supported Arius and was condemned by the Council of Antioch in 324/5. 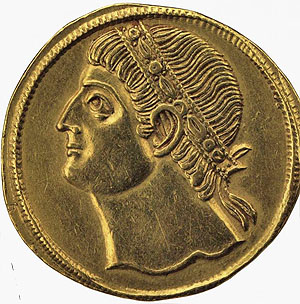 At the council of Nicaea in 325, he took a prominent part, occupying a seat at the emperor’s right hand, and being appointed to deliver the panegyric oration in his honour. He was the leader of the large middle party of Moderates at the council, and submitted the first draft of the baptismal creed of Caesarea as evidence of his orthodoxy, which was afterwards adopted with important changes and additions[35]. In the beginning he was the most influential man present, but was finally forced to yield to the Alexandrian party, and to vote for a creed which completely repudiated the position of the Arians, with whom he had himself been hitherto more in sympathy than with the Alexandrians[36]. However, his acceptance of the creed was half-hearted, and he continued as one of the opponents of Athanasius[37].

Eusebius started from the fundamental thought of the absolute sovereignty (monarchia) of God. God is the cause of all beings. But he is not merely a cause; in him everything good is included, from him all life originates, and he is the source of all virtue. He is the highest God to whom Christ is subject as the second God. God sent Christ into the world that it may partake of the blessings included in the essence of God. Christ is the only really good creature, he possesses the image of God and is a ray of the eternal light; but the figure of the ray is so limited by Eusebius that he expressly emphasizes the self-existence of Son. For this, Eusebius feared the Western heresy of Sabellianism and was lukewarm toward Nicaea’s Homoousion settlement “of the same substance with the Father” because it smacked of modalism.

The fact that the Homoousion had the strong support of known modalists such as Marcellus of Ancyra only confirmed Eastern suspicions that the Nicene formula was a Trojan horse for insinuating modalism and patripassianism into the doctrine of God. In part, it had to do with his Origenistic training. Origen was strongly subordinationistic and held an adoptionist Christology, and it would appear that Eusebius was less than orthodox in his Christology. Also Eusebius underlined that the Son was a “perfect creature” and then “Son is a creature of God whose generation, took place before time. Son is in his activity the organ of God, the creator of life, the principle of every revelation of God, who in his absoluteness is enthroned above all the world. This divine Logos assumed a human body without being altered thereby in any way in his being[38].

In fact, Eusebius refused the eternity, homoousiotita, aidiotita of Son, and he remained theologically strict follower of Arius. He succeeded, however, to obscure his extreme position as arianist either as signing Orthodox Symbol and either sometimes stressing that the term consubstantial is not necessary for the relationship of the Father with the Son.

Generally, the presence of Eusebius in the Church had positive and negative sides. The Christianity honours him as a significant historian, an ecclesiastical writer but not as a patristic father, not as a saint.

The Primary Sources for Reign of Constantine

The fact is that the attitude of historians towards Constantine is contradictory. For others there was great riddle or brutal killer and an opportunist, and for others, the great miracle of history. This happens because it usually prevails ideological criteria and partisan considerations in the default sources. This opinion is one of the greatest crimes in the field of history, leading run entirely on own suppression history and research, is the use of history to any adaptations, to be used to prove things that are not historically based. The most important sources for the reign of Constantine is the writings of Eusebius of Caesarea and Lactantius[39].

Eusebius’s history was not written simply to record the deeds of the church after Christ’s ascension; he wanted to show that Christianity, with Constantine’s conversion, was the pinnacle of humanity’s long climb. The church had been an oppressed minority, but now it could enter a period of peace. The first direct references to Constantine’s conversion come from the surviving writings of Lactantius and Eusebius, both of them early Christian writers who lived during the time of Constantine. They both had close ties to the Emperor; Lactantius as his son’s tutor[40] and Eusebius as an acquaintance. Despite their differences in recounting the events leading up to the battle of the Milvian Bridge – Eusebius tells of a divine encounter, in which Constantine and his entire army see a vision sent by the Christian god in the sky, an episode which is entirely absent from Lactantius’ previously written account – both sources agree essentially that Constantine converted as a direct result of a visit from the Christian God in his dreams.

[39] G. Metallinos, “Constantine the great and the historic truth“, http://www.impantokratoros.gr/megas_konstantinos_sykofanties.print.el.aspx (2010).