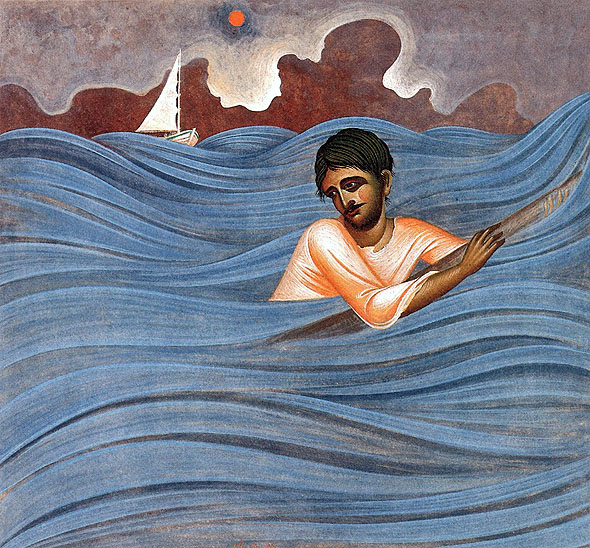 Text written somwhere in the 1950s…

Most people value art that depicts what it wants to portray in a natural way. But this is a mechanical task that shows people what they’re looking at, without changing it in any way, as authors would if they just recorded the words coming out of somebody’s mouth, like a phonograph. That might require some skill that could be learned, but it’s not art.

Art is taking what you see as a starting-point, then changing it within yourself in your own way and making a work that’ll have some real substance, without being a faithful copy. In any case, depicting anything whatever exactly as it is in nature would be a pointless task, since all things are either eternally before us or are constantly recurring features- people, animals, trees, mountains, clouds, the dawn, the sunset, noon, the sea, boats and anything else you can think of. So what need is there for you to do the same thing on canvas or wood, especially when you’ll never achieve the vibrancy that the real things enjoy? […]

To make my meaning clearer, let me give you an example. The Assyrians knew all about lions and didn’t kill them when they hunted them but captured them alive and put them on display in cages.  Since they loved them and admired them for their bravery, they wanted to depict them in their art, so they engraved them on rocks and palaces. And although they were among the most ancient peoples to apply themselves to art and although their art isn’t naturalistic, in the way that most people today would recognize, nevertheless, no artist, painter or sculptor has ever portrayed the lion with such vibrancy and truth.

And if you put the lions that these Assyrians made next to those that some modern artists have produced, such as the works of the French sculptor Barye, who was an animalier, or the lion recumbent in a cave in Nafplio, and another etched onto the same rock face of the cave as another by some Bavarian artist, you’ll see how much vibrancy and inexplicable truth the older ones have compared to the newer, even though they’ve been produced with great simplicity, whereas the modern ones have been done with great knowledge and attention to the smallest detail, down to the hairs of their whiskers and the skin covering their claws.

The latter have been made by people who studied the animals alive in zoos or dead in a dissecting room. Yet despite this, the more faithfully and carefully they imitated them the less vibrancy and truth there is in their works. Because all things, be they animals, trees, mountains, or the sea, are shrouded in mystery which people don’t see if they only look at the outer form of each of them. This mystery is their soul and if you capture it and can record it, there’s no need for you to struggle to imitate the external details, which don’t contribute at all towards making your work real.

The Assyrian who worked on the rock with an awl had a simple soul, his eye saw simply and he captured this mystery, this essence of the lion, without becoming confused and losing it or getting all tied up in the fur and minor details, thinking that this would be closer to the truth, whereas in fact it takes you further away from it. And in this way, he was able to encompass within one lion the vibrancy and truth of all lions and thus reinforced its character. The others, though, weakened it because they lacked that simple and vital spark that finds the essence in all things. Instead they laboured to embellish their works with a whole host of pointless things. This is why the one lion is a work of art and the other a dead copy of nature, like those you see in zoology books.

The same’s true of everything else. Flowers, for instance which some real artists have been able to depict simply, but with great sensitivity and you can see how they’ve managed to capture their elegance and their scent.

So naturalist art is the most inferior kind and the only aim of a painter who paints naturally is a trompe l’oeil effect, which makes them some kind of wonder-worker. But this belittles art. Many modern painters, however, in their efforts to escape this narrow and sterile fidelity to nature went to the opposite extreme and made works that are arbitrary, that have no inspiration, no power to move, nothing at all except that they’re not naturalistic. It seems as if modern artists are always experimenting, like scientists, without anything firm to go on.

This basis is what we call tradition. Tradition supports the artist through various rules, and while though this doesn’t restrict the boundaries of a person’s art, it does make the work commendable. Half-baked artists don’t want tradition because, supposedly, they then lose their freedom, by which they mean that they can do whatever they want in a slapdash manner. But with all this freedom that they talk about, they don’t do anything except make everyday things that you get tired of looking at. Tradition, on the other hand, reinforces the personal ability of the artist, as long as it’s taken as a basis on which their own things can be produced.

You might think of tradition as the setting of the loom, which is the same for whatever weave you’re working on, whereas the pattern is the art of weaver, based on tradition, and is what makes the real work. In this way, art acquires a significance and a truth that makes it like a natural phenomenon, whereas art that’s detached and wants to work without rules produces artificial pieces, like flowers and plants made of paper, which haven’t got any roots.

There are lots of clueless people who have the notion, as we’ve said, that the sole aim of art is to make natural things, and who don’t demand any more from the artist. This is why, in every age, clueless people such as these think that naturalistic art is the most ‘modern’. This is what churchwardens and priests ask us for: natural saints, because they think they’re more ‘modern’. How do you expect the unfortunate people to know that the Byzantine is the more ‘modern’ and that the naturalistic is the older? They were painting in a naturalist manner before the birth of Christ, as is shown by the artwork in Pompeii, whereas the Byzantine works appeared later.

The most profound art is religious, and the most profound of all religious art is Byzantine, because it’s spiritual, because it’s rooted in the truth, in the Gospels. You don’t have to have studied in order to feel this art. All it needs is a devout and pure heart because you appreciate it as a feeling rather than with your mind, as is the case with naturalistic art, which you look at to see if it looks natural, if the anatomy and perspective and so on are correct, as if these things contributed towards making it a real work of art.

This is another sign that people today have degenerated, are wallowing in material things and are incapable of feeling the spiritual. Yet our forebears, who were illiterate, understood and venerated these stern and spiritual works of art that we see in old monasteries and churches, painted on the walls or the planks or woven onto cloth. They didn’t ask why they weren’t as natural as photographs, the way their degenerate descendants do. The old folk appreciated the artists who created these works.

It really is a most wonderful thing how, with faith in Christ, even the most untutored, rough people can become spiritual in all things. What progress have we made, who are supposed to be well-read, mightily intelligent and academic when we put into our churches those dreadful green and red rub-ons, invested with some sort of tin shirting and with rays of bits of metal around the saints’ heads! And just to make everything blend in nicely together, we also put tinny ‘modern’ music, that is bland voices, without any substance, that are put out to air from the mouths of balladeers who can’t sing. Even a people such as ours will sink to such depths if it casts off its tradition in a vain attempt to show it’s not rustic and backward, but terribly civilized. Like a sailor who goes mad in the middle of the ocean, throws away his compass and doesn’t know where he’s headed.

You can’t even laugh at this comical sight, because you see the depths your own people have plunged to and it hurts. Very much to blame for this are those charlatans who’ve deceived ordinary people with their adverts, their coloured flares and theories full of stupidity and illiteracy.

We’re only a few people labouring to bring people to more or less the true path, showing them, as best we can the spiritual morass into which they’ve fallen and are sinking deeper by the day. And they call it progress and civilization.

Glory to God, our struggle is starting to bear good fruit. Greeks are beginning to come to their senses, to stir from their drugged state, to want to become real and to regain their former warmth and sympathetic air. They’re beginning to despise those cold fish that call themselves ‘modern’. When you see them, you wonder how our serious and brave nation has ended up with so cold, bland and effeminate.