Blessed Kyrillos was born in Marpissa, on the island of Paros in 1748 and his family name was Papadopoulos. As a young man, he went to the Holy Mountain and enrolled as a student in the Vatopaidan Athoniada School. He had Blessed Athanasios, also from Paros, as a teacher and he copied and applied throughout his life his mentor’s burning zeal and unceasing, dedicated activity for the glory of the Lord of All.

The principal of the Athoniada School, Archimandrite Nikiforos Mikroayiannanitis [from the Little Skete of Saint Ann] reports that ‘at the time of [Athanasios] Parios, the Athoniada was particularly flourishing and great progress in the virtues was made by students such as the New Martyr, Saint Athanasios Koulakiotis, and Blessed Kyrillos Papadopoulos, the founder of the Monastery of Megalou Dendrou, on Paros. Kyrillos remained on the Holy Mountain as a monk for a considerable time, teaching both ‘sacred letters’ and secular wisdom, and was associated with the renewal movement of the saintly Kollyvades fathers and their main representatives.

Among these were the brothers after the flesh Ierotheos and Filotheos Georgiou, who later went to Paros and became the new founders and renovators of the Holy Monastery of the Life-Receiving Spring in Longovarda. During Kyrillos’ time on Athos, his acquaintance with blessed elders and his desire for increase in virtue made him an outstanding monk, whose virtue and learning were greater than those of any other Athonite ascetic. 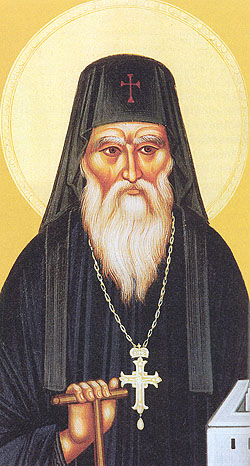 After his departure from the Holy Mountain, the Patriarch of Constantinople appointed him preacher general of the Aegean, because of his virtues and knowledge. He became a zealous preacher of the word of God and wherever he went, like Kosmas Aitolos, he would set up a large cross and, with this as symbol and banner, would deliver fiery speeches.

His fervent and incessant sermons were very constructive, but at the same time discreetly corrective. At the sacrament of confession and in private conversations he was compassionate, consoling and supportive.

In 1811, he found himself in Attica as a preacher and confessor. A young man whom he helped to further his education wrote: ‘Kyrillos the preacher from Paros, whom public opinion held to be an ascetic, since he had come from the Holy Mountain passed through there. He travelled around the Aegean Islands and villages in Greece, preaching the word of God and confessing those who came to him for this purpose’. In 1823, he baptized a Turkish woman on Paros.

This important missionary and little known confessor of the Orthodox faith travelled as far as Caesarea in Cappadocia and Aïvali on his travels as a preacher. Blessed Kyrillos also excelled as an ideal mentor, confessor and spiritual guide. In particular, through divine worship and the sacraments of the Church he fortified, declared, affirmed and made intelligible to all the incarnate dispensation of the incomprehensible Word of God. His confident stance towards powerful politicians and men of the Church was such that he had no hesitation in reprimanding them, like a second Baptist or Elijah, over any misconduct or injustice, despite the fact that this behaviour cost him dearly. He was threatened, suffered ill-treatment and survived numerous attempts on his life on the part of the infidels.

The time he spent on Paros and his presence there had an impact on the devout population, ensuring a warm appreciation of monasticism and a revival of its fortunes on the island. During his stay at the monastery of Saint Anthony, in Marpissa, he was visited by Blessed Arsenios and his Elder, Daniil, as Blessed Filotheos Zervakos mentions: ‘They arrived on Paros with nothing but the habits they were wearing, having fled the campaign of Dramalis [Turkish general charged with quelling the uprising in 1822]. They were sent by Abbot Filotheos to the monastery of Saint Anthony, which lies in Marpissa, to the noted missionary and national preacher Kyrillos Papadopoulos, who was living there with certain Athonite brethren of the Kollyvades, as they were known, who had gone there to lead the hesychast life”.

Blessed Kyrillos renovated the nun’s monastery of Christou Dasous on Paros: providing for all their needs, advising as spiritual father, contributing, assisting and consoling. He was particularly close to the Elders Filotheos and Ierotheos at the Monastery of Longovarda and, according them all honour and love, commissioned the former to draw up the Rule of the Monastery of Nuns. He also renovated the holy monastery of Saint George in Langadas and used his good offices for the restoration of the monastery of Longovarda and that of the Mother of God Faneromeni, on Naxos.

Blessed Kyrillos was endowed with the gift of foresight and with the ability to work miracles. He made the sign of the cross over a snake and it died; he travelled on his monastic habit which he spread out on the sea; he struck a rock at the arid monastery of Saint George and a spring gushed forth which is still running to this day. He went to his rest in the Lord on 11 July, 1833, at the monastery of Saint George, of which he was renovator and abbot, and was buried there. His precious skull is preserved in the monastery. His memory is celebrated on 11 July.