Much has been written about the Elder. Those who knew him best and were closest to him have mostly chosen to remain silent. I have imitated them. Not because I was one of them. I’ve simply respected his memory. The Elder, I think, didn’t much care for quantity, sheer size or publicity. We were neighbours for a decade.

I used to watch the crowds in his garden. We’d point out the way to his kelli to pilgrims. I didn’t visit him all that regularly. I followed certain visitors and went only in times of great need. I respected his privacy and the offer of his love. 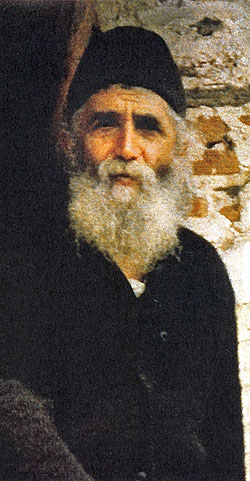 He was born in Cappadocia, in Farasa, in 1924. His father was the village president and had ten children. Both his parents were well-known for their devotion to the Church. A few days before they left for Greece, as a result of the dreadful Asia Minor catastrophe, Saint Arsenios the Cappadocian (†1924), whose biography he so beautifully wrote, baptized him, giving him his own name. In this way, as the writer and artist Nikos Gavriil Pentzikis, from Thessaloniki, said, ‘the living father Païsios is the departed father Arsenios’. As an infant refugee, he arrived in Piraeus and was taken thence to Corfu, where his godfather [Saint Arsenios] fell asleep in the Lord, before the child and his family moved on to Konitsa. He just about completed primary school and then took up carpentry.

After he’d completed his military service, he came to the Holy Mountain to be a monk, as was his great wish. He lived in our skete- Saint Panteleïmon, belonging to the Holy Monastery of Koutloumousiou, in Esfigmenou, Filotheou, Katounakia, the hermitage of Saint Galaktion on Mount Sinai, the monastery of Stomio in Konitsa, the Skete of Iviron, the monastery of Stavronikita, in Papa-Tykhon the Russian’s (†1968) kelli of the Precious Cross, and in the Koutloumousiou kelli of the Panagouda [Mother of God]. Even as a young man, he loved contributing, studying and praying. In particular, he read assiduously the Lives of the Saints, the Sayings of the Fathers and Abba Isaak the Syrian. He paid great attention to his spiritual father and would visit Athonite Elders to seek their advice.

Later, although this was not his intention, he became an advisor and guide to many. He spoke a great deal about the moral obligation to do what’s right. He used humour to smooth over difficult situations. Tired, sick and exhausted though he was, he would continue, until the setting of the sun, to bring comfort to those with problems. Night was devoted to prayer. He would remember thousands of names, living and departed, of cancer sufferers, those with heart problems, the sick in mind, the possessed, cripples, drug addicts, divorced couples, and the destitute. He used to say that we should pray even more for the departed. They had need of us. We alone could help them. He himself was very sick, but his ill health, bad though it was, didn’t keep him from his spiritual struggle.

He was taught much by the school of the desert and he instructed his many visitors with the fruits of this experience. He spoke of the necessity for purification of the soul, of another ‘way of reasoning’, of divine justice, of plain dealings, of bringing peace to other people, of self-criticism and of the need for practical experience of the ascetic life. He was Christocentric and Christological. ‘Christ is moved by our love and our humility’, he said, ‘and gives us His mercy and grace in abundance’.

‘We should make a factory to produce good thoughts’, he would often say. He placed great importance on the distress caused by inner thoughts. Many of these are provoked by the demons and are designed to pervert us. Too much confidence in these inner thoughts isn’t beneficial. The heart should be free of all thoughts. We hinder God’s work in our soul with unseemly thoughts. People who retain good thoughts have nothing to lose. It’s those without humility and repentance who’re tormented by vain thoughts. If we give in to wicked thoughts, the demons are heartened. Pertinacity in our inner thoughts can lead to delusion and even to insanity. There’s a constant struggle between good and bad thoughts. Humble thoughts activate God’s grace. When the soul’s not guarding our thoughts, it’s swamped with impure thoughts and beset with psychological problems. The quality of their thoughts is what reveals people’s spiritual state. We should try and correct the meretricious thoughts of others and not allow our own to nestle within us.

He fought for years to achieve purity of soul. His constant concern was purification. He laboured with justifiable pride to cultivate the vineyard of his spiritual life. He allowed himself to be guided by Divine Providence. He undertook the ascent of the ladder of continuous prayer without a second thought. Real prayer eases, sanctifies and benefits. He loved the psalms of David. He was humble and steadfast. He was always instructing, simply and with grace. His words were wise. He spoke with saints. One day he told me, ‘Last night was the best night of my life. I kept vigil with the saints’. He wouldn’t accept money from anyone. In a vision, Saint Arsenios congratulated him on this. He made do with the income from his handiwork, which was making crosses and icons stamped on wood.

He wrote and published the wonderful Life of Saint Arsenios [I was privileged to translate this work into English. The Elder told me not to tell anyone, but now I believe it should be common knowledge: he wrote in an ordinary jotter with a ball-point pen. The words came out so fast he could hardly keep up and it seemed to him that sparks were flying from the tip of the pen. WJL]. He knew what was important to mention, what was essential, and expressed it felicitously and in powerful descriptions. After this, he published the biography of Elder Hatzi-Yorgi, the famous and strict Athonite ascetic, on the occasion of the centenary of the latter’s death. This was followed by his book on the Athonite fathers and Athonite matters, in which he described devout figures he had known personally, such as Papa-Tykhon (†1968). Soon after Elder Païsios’ death, the Monastery of Saint John the Theologian in Souroti [near Thessaloniki] published an anthology of his letters. He also wrote small articles which he gave to his visitors, as well as letters which were full of brotherly love and charity. He visited Cappadocia, Australia, and a good number of monasteries in Greece. He got to know clergy, monastics and a host of lay people.

His last words show clearly the state of his soul: ‘Since I can’t kneel any more, I’m not needed here on earth and I have to go. The ascetic life I’ve lived all these years hasn’t been of as much benefit as this illness’. For so many years he’d prayed for cancer sufferers and was now one himself. Despite his pain, he was immersed in prayer when he went to his rest on 12 July 1994. He was buried at the women’s monastery of Saint John the Theologian, in Souroti, near Thessaloniki, to the consolation of many. His grave soon became a pilgrimage site. His burial and memorial services took place out of the public eye, with just one priest serving.

His words and his writings are a permanent record of his teaching to all of us. His observations were precise and subtle, to the point that they moved people deeply and were aimed at helping them. People who are spiritual don’t have many rights. They don’t mind being put upon. Too much sensitivity and too much indifference are the same evil. Tears have a purifying value, as long as they’re mingled with sweat. These days we want to become saints with the least possible effort. The greatest joy comes from sacrifice. Secular life builds stress. Grace gives the greatest joy. A soft life makes people useless. Without effort and struggle, there’s no sanctification.

Elder Païsios struggled hard throughout his life. He was distinguished more as an ascetic than as someone under obedience. He prayed and lived with a profound sense of his sinfulness. He had total confidence and hope in God. It was easy for him to concentrate on prayer, because there wasn’t much to divert him. He prayed when he was asleep. He prayed and relaxed. He lived the hesychast life. For him, his greatest enemy was the fame he’d acquired. He was concerned about the direction that Greece and modern Greeks were taking, but never depresed people

Elder Païsios and Elder Porfyrios often agreed in what they said, as if they’d come to a prior agreement. This is how Orthodox spirituality works, with the same Holy Spirit. By God’s grace, he often read people’s souls as if they were an open book. He’d been illumined and he illumined. His simple words hide, as it were, the wisdom of virtue. He was practical. Like the Fathers of the Church, he poured from his heart the word of God, which was empirical, experiential and genuine. There were more than a few who benefited from just a few moments of his time. For others, meeting him was a turning point in their lives. Our acquaintance with him isn’t a cause for boasting, but a responsibility and obligation. 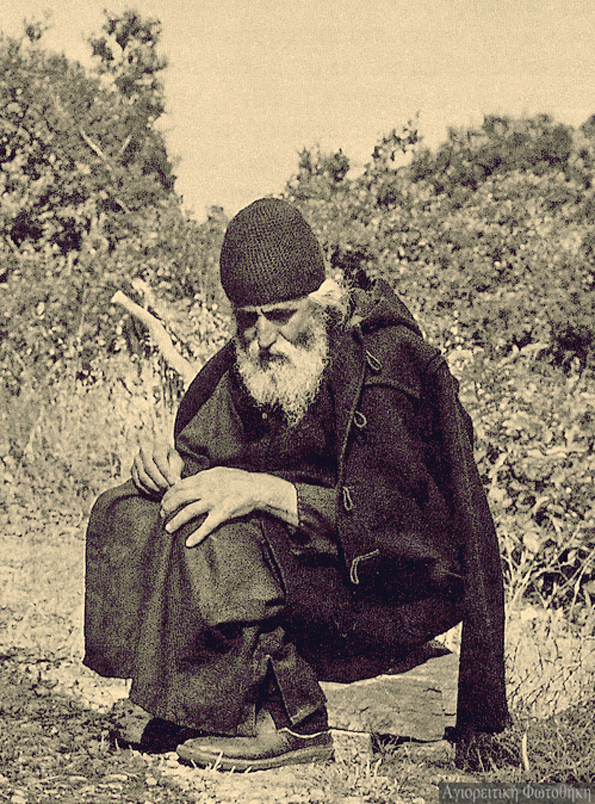 His memory’s pure and venerable. He loved the Holy Mountain deeply and honoured it. At his memorial service in July 2009, there were 12,000 people at the monastery of Souroti. That says a great deal to those who wish to lash out at Athonite monasticism in a nasty and vicious manner.

Elder Païsios prayed to God for everyone and God blessed him. He talked to the saints about the problems of the world and asked for their prayers. God placed him in his al fresco reception rooms [his garden, where he used to receive pilgrims] so that he could relate to people. He may have been strict sometimes, but it was only ever out of love. A love that was discrete, restrained, and heart-felt. The Holy Mountain is proud to have such Elders in our day and age. Many gifts were disbursed as he passed. When we struggle, we enjoy them. He prays even more now that he’s in heaven, as he used to say about Saint Arsenios. May his prayer be with us when we look at the humble Kelli of the Panagouda, which large numbers of pilgrims continue to visit, thirsting for real and true sanctity and indifferent to the excesses of some.