How the monks make kollyva on the Holy Mountain

On the Holy Mountain, the abbots of the last hundred years are commemorated, as well as the priests and monks of the last thirty and kollyvo is also made every time an icon is placed in the church for veneration. Every Saturday, however, the departed are remembered unless it’s the return of a feast of the Lord: a little zinc plate of boiled wheat is placed under the icon of Christ.

The kollyvo for a feast requires real confectionary and iconographical skills. Normally, on the surface there’s an icon of the founder or the saint who the honored in the main church is named after, for example, Saint Athanasios the Athonite in the Great Lavra or the Annunciation in the Monastery of Vatopaidi.

Ordinary kollyvo is made as follows: they place crushed wheat into water to make it expand. Then they put it into a container of cold water and bring it to the boil. After half an hour, they pour off the water and add fresh, boiling it again until the wheat is soft and the liquid opaque. A little salt is added. They pour off the liquid, with the addition of sugar and cinnamon. They wash the wheat in cold water to stop it sticking and spread it out to dry. Two or three hours before the Divine Liturgy, the monk whose obedience it is, takes a handful of fine breadcrumbs and adds it to the kollyvo to soak up any moisture, so that it’s completely dry. Afterwards he’ll sieve it to get rid of the breadcrumbs. The wheat’s now ready. He spreads it out and sprinkles sugar on top (not caster sugar, but ordinary) and makes a cross with sugar colored with cinnamon. If he wishes, he can also add ground hazelnuts at an earlier stage in the process. 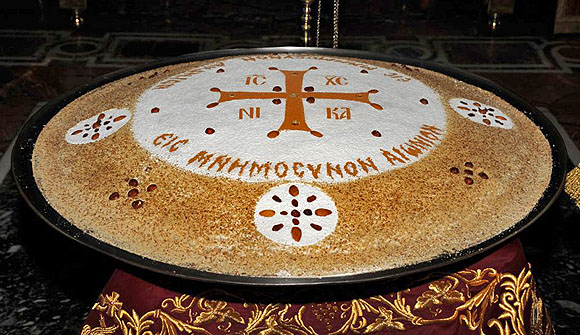 The kollyvo for a feast has ground walnuts added, as well as cloves and cumin. Some monasteries use ground hazelnuts (carefully peeled of their skins) instead of walnuts and cinnamon instead of cloves. 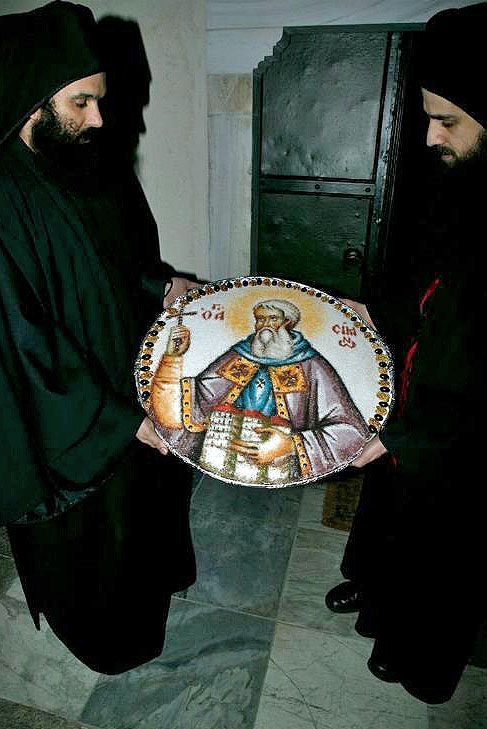 For the icons on the surface of the kollyvo, they take the wooden end of a fine artist’s brush and press the shape on the sugar from the anthivolo (a copy or template). In this way, they fill in the clothes, face and hair with different-colored sugars. 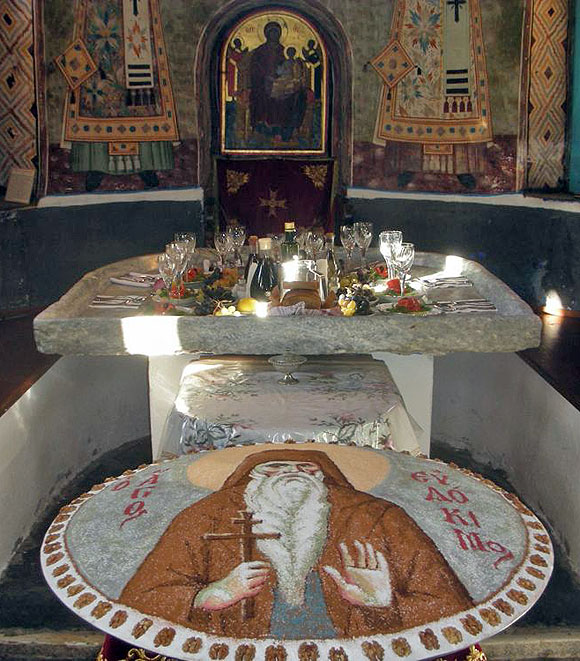 Ordinary kollyvo is the normal sweet for monks in a coenobium and is distributed in the refectory at the end of the meal. The Russians on the Holy Mountain make kollyvo not with wheat, but with rice, as is the custom in Russia. Smyrnakis noted that this was the case not only in the Monastery of Saint Panteleïmon, but also in the Russian sketes and cells, as well. 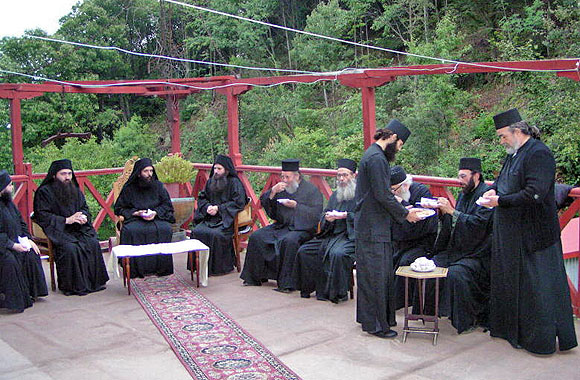