He was born to Athanasios and Theopoula Ladas in Serres in 1909 and christened Ioannis. In 1963, he arrived at the Vatopaidan kelli of Saint Ann at Kolçu. In 1964, he was tonsured as a monk and given the name Filippos. In 1971 he came and settled permanently in the Monastery of Vatopaidi. 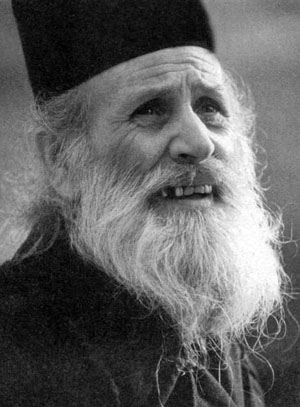 He was a monk who was diligent in his attendance at services. He would be the first in church for a service and the last to leave. In the long daily services and during all-night vigils he always stood. He never sat in a prayer-stall. He always ate sparingly, never said much and was very ascetic. When his health failed, he retired to his cell. He didn’t want visits or conversations. He was preparing for the great journey from which no traveller returns. He said to one monk: ‘I’ll die in three days’. And that’s exactly what happened. Without fuss, he went to the place he desired to go, because he’d been prepared to do so for years. Some people found him odd and strange. But it was probably they who were odd and strange and wanted to learn his exact secrets. Old Filippos knew exactly what he was doing. Virtue is lost if it proclaims itself. His obscurity increased his virtue. He was an inconspicuous hero. He went to his rest in the Lord on 12/8/1988, entreating the powerful intercessions of the Mother of God.

Source: Monastic registry of the Holy Monastery of Vatopaidi