What did Peter then say, given that he was ardent in everything he did, and always a step in front of the others?

He didn’t say, ‘Pray and entreat’,  but, ‘Bid’. Do you see his great ardour, his great faith? Yet this certainly often landed him in danger, making him seek things above his bent. Here, too, he asked a very great thing, though out of love rather than to show off. Because he didn’t say ‘Bid me walk on the water’, but what? ‘Bid me come to you’. No-one loved Jesus so much. 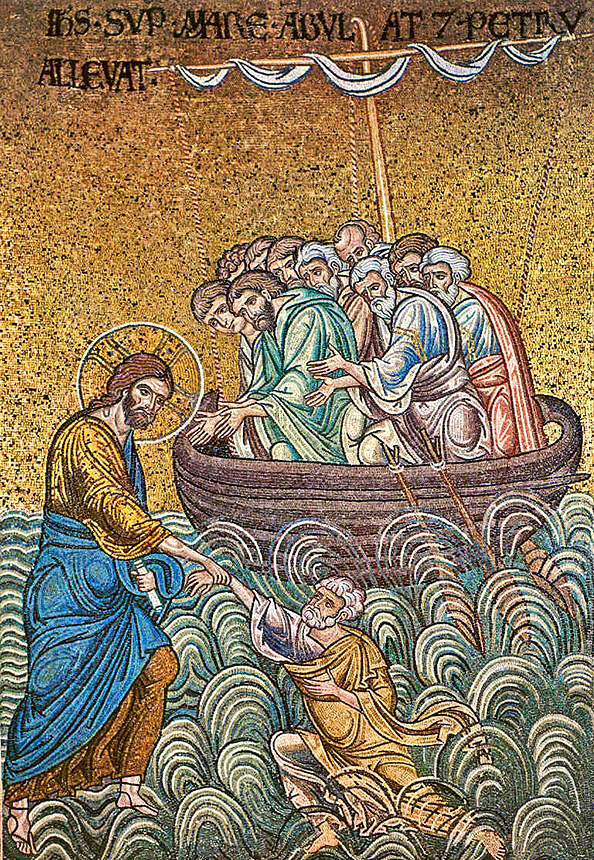 He did the same thing after the Resurrection: he couldn’t bear to come with the others, but made his own way forward. And he demonstrates not only love, but faith, too. He not only believed that  he was able to walk on the sea himself, but that he could lead the others over it, also; and he longed to be near Him quickly.

‘And he said, “Come”. And when Peter came down out of the ship, he walked on the water, and came to Jesus. But when he saw how blustery the wind was, he was afraid, and, beginning to sink, he cried, “Lord, save me”. And immediately Jesus stretched forth His hand and caught him, and said to him, “You of little faith, why did you doubt?”’.

This is more wonderful than the former occasion, which is why it happens after it. Because after He has shown that He rules the sea, He then carries on the sign to what is even more marvellous. In the first instance, He rebuked the winds only; but now He both walks Himself, and permits someone else to do so, too. If He had required this to be done at the beginning, Peter wouldn’t have received it so well, because he hadn’t yet acquired such great faith.

So why did Christ allow him? Well, if He’d said, “You can’t”, Peter being Peter would have contradicted Him again. He convinced him by what took place, so that, in future he might be more restrained.

In any case, he couldn’t bear it. He climbs overboard and loses his grip on things and becomes afraid. The dizziness was caused by the tossing of the waves, but the fear by the wind.

But John, relating this same circumstance, says, that ‘they willingly received Him into the ship; and immediately the ship was at the land they had left’. So that they were on the point of arriving at the land when He entered the ship.

Having disembarked, Peter went to Him, not so much pleased at walking on the water, as at the fact of coming to Him. When he had prevailed over the greater danger, he was on the point of succumbing to the lesser, to the violence of the wind, I mean, rather than the sea. This is human nature; it’s not unusual for us to achieve something great and then stumble over something less, like Elijah with Jezebel, Moses with the Egyptian, and David with Bathsheba. So it was with Peter: while the others’ fear was at its height, he had the courage to walk on the water. But against the assault of the wind, he was no longer able to stand, despite being near Christ. It’s therefore of absolutely no benefit to be simply near Christ, unless you are with Him in faith.

This also demonstrated the difference between the Master and the disciple, and placated the feelings of the others. Because, if they were indignant in the case of the two brothers, how much more so would they have been here, since the Spirit had not yet been transmitted to them.

But afterwards they weren’t like that. On every occasion, for example, they give pride of place to Peter, and put him forward in their addresses to the people, although he was more of a rough diamond than any of them.

And why didn’t He command the winds to cease, but Himself stretched forth His hand and took hold of him? Because Peter needed faith. When we lack something on our part, then God’s part is to provide.

He said, ‘Why did you doubt, you of little faith?’, by which He meant that it wasn’t the assault of the wind but his lack of faith that had brought Peter’s downfall. Had his faith not been weak, he’d have stood against the wind as well. This is why, even after Christ catches hold of Peter, He still allows the wind to blow, showing that you come to no harm if your faith is steadfast.

Just as when a chick gets out of the nest prematurely, is in danger of falling, is borne up by its mother’s wings, and brought back to the nest, this is what Christ did.

‘And when they came into the ship, the wind ceased’.

Previously they’d said, ‘What kind of man is this, that even the winds and the sea obey Him!’. Now, this was not the case. It says that ‘They who were on the ship came and worshipped Him, saying, “Truly, you are the Son of God”’. Do you see how He was gradually leading them all higher and higher? By walking on the sea, and by commanding another to do so, and preserving him in danger, He increased their faith greatly. On the first occasion He had, indeed, rebuked the sea, but this time He didn’t, demonstrating His power more abundantly, in another way. This is why they said, ‘Truly you are the Son of God’.