Spiritual hunger, the material needs and the miracle of sharing love

One of the most impressive evangelical readings is that which refers to the blessing and multiplication of the five loaves and the two fish by Christ in the desert, in order to feed to the five thousand and the women and children who were attending His teachings in the wilderness. Christ satisfies the spiritual needs of men and then their material needs. 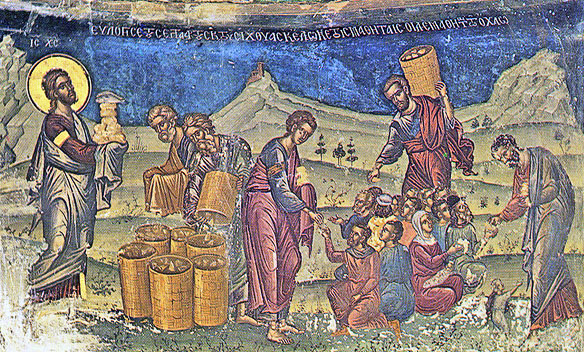 When Christ’s Disciples ask Him to dismiss the people who gathered, to depart from Him in order to go into the nearby villages and buy for themselves food, Christ says to them: “they have no need to depart” (Matth. 14:16). They have no need to depart from Me in order to eat, but you My Disciples can give them. Thus, the Lord placed the path which will change the understanding which the majority of people have about Christ’s Disciples and those who will follow, in other words the men who belong to His Church.

For someone to leave his house and his work and to find Jesus Christ is a sign of deep faith. For men and women from sunrise to sunset to listen Jesus teachings is also a sign of faith, great devotion and spiritual hunger.

The sun was at its sunset and the Disciples inform the Lord to send away the multitude in order to buy food, because in the desert they have nothing and the place is deserted. To listen to teachings all day means that these teachings are of the most important compared to any family responsibilities and reveals that this is the truth. For Jesus’ teachings are the fulfillment of life and salvation.

Christ sees in the desert the people who hunger for life, for truth, for communion with God. He satisfies them not only with His teachings, but mainly with His personality, with His presence. The material needs Christ combines with the spiritual needs and thus He says to His Disciples that they have no need for the people to depart from Him. This is the path which the Church follows, although she is under great pressure by the world to give priority to the material rather than the spiritual needs of man.

The Church is called by word, by ascetism, by sacramental life, by the experience of the Saints, by her presence generally, to show that “man will not live only on bread” and from that moment on, since man is satisfied spiritually, to help him and the material part of his life.

If man has been satisfied by the presence of Christ and His word, then the Disciples’ responsibility is to prevent him to depart in order to find his material food, but to share theirs with him. Because this is little, Christ by praying, He multiplies it, so that it will be sufficient for all, and to remain plentifully.

During this period of great crisis many might think that Christ is utopia. Especially, when the number of those who live under the boundaries of poverty or are deprived of the daily bread, our humanity is drawn to speak about philanthropy and demand from the Church to offer.

How many of those who demand from the Church to turn the Gospel’s teachings, are putting in action what they believe for others? But, the Church how much more can she survive under this pressure and to give to men to understand of what is the true aim of life?

Maybe, if men experienced the spiritual satisfaction, they might have no need to share their food with those who are deprived of it? Here the Disciples are the characteristic example that they had not themselves satisfied spiritually in order to feel that which is easily understood: to share the material with those who attending Christ’s teachings. What else the logical advise to Christ to send away the multitude in order to find food for themselves?

Although Christ shows them the final way, that it is not logic which should lead our life, but the spiritual way, love, from which the miracle can be revealed. For, love finally is the sign of spiritual satisfaction, which bears the fulfillment in man and is the final miracle of sharing love.

How many of us are we ready in these days to proclaim the word of Christ: “Man shall not live only on bread, but on every word which proceeds from the mouth of God” (Matth. 4, 4).

How satisfied are we from the word of God, in order to listen to the words: “they have no need to depart, give them to eat” (Matth. 14:16), how much spiritually and materially?