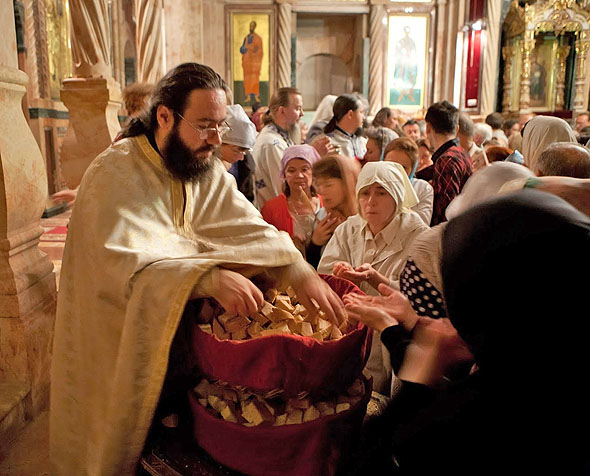 The culmination of the bloodless sacrifice is the dismissal, that is the declaration on the part of the celebrant which announces the completion of the service and the exhortation to the faithful to leave the church. The term dismissal is derived from Latin- the prefix dis- and the verb mittere = ‘to send away [Hence, probably, the term ‘Mass’ in the Church of Rome, from Ite, missa est’]. In the most ancient forms of the service, such as those of Saint James the Brother of the Lord, or Gregory the Theologian, the end of the Divine Eucharist was marked by the command from the deacon ‘Depart in peace’. The dismissal of the congregation was changed thereafter, gradually assuming its modern structure in Byzantine times (the Liturgies of Saints John Chrysostom and Basil the Great).

In modern liturgical practice, the Divine Liturgy is completed with the phrase ‘Through the prayers of our Holy Fathers, Lord Jesus Christ our God have mercy upon us and save us’, as the end of the invocation by the celebrant. Ending the service with this phrase is of much later provenance and was introduced at the end of all services under the influence of monasticism. The inclusion of this exclamation at the end of the Divine Liturgy dates to after the restitution of the icons (843) and the simultaneous predominance of monasticism, which brought into parish practice a series of alterations based on the rubrics of the monastic typiko. This exclamation is of purely monastic provenance, since it refers explicitly to the invocation of the fathers of the monastery who are present at that moment, praying together in the katholiko (main church). According to Yervasios Paraskevopoulos, it would be correct, in parish practice to use the more ancient phrase ‘May the Holy Trinity preserve and save all of you’, which is now said immediately after the dismissal of the congregation with ‘Through the prayers’.

If we examine both exclamations, neither seem to give a definite and specific end to the Divine Liturgy, since they merely incorporate a request for God’s salvation for us and His divine mercy. The absence of a specific dismissal demonstrates the eschatological nature of liturgical time. Ecclesiastical, liturgical time is not a straight line, nor yet cyclical, with an everlasting recycling of the same events, as the pre-Christian and non-Christian communities suppose. According to Fr. George Metallinos, the liturgical time of the Church is an eternal present which gathers together the past, present and future in the immediacy of participation in the divine presence. This means that this time has no beginning and no end, since its starting and end points are God’s limitlessness. The march of time has as its purpose and aim the Last Times, but it has no end, since life with God is without end.

The Divine Liturgy is celebrated in eschatological, endless and eternal time, outside the secular notion of time, as a foretaste of the Last Times. Besides, it is one and the same, as is the Body of Christ, which is sacrificed and given in communion to the faithful every time the Eucharist is celebrated. The celebration of the Divine Liturgy on a daily basis doesn’t mean that there are many ‘Divine Liturgies’, but rather that there’s only one, just as the Last Supper was unique and cannot be repeated. The lack of a specific dismissal denotes the continuation and unity of divine worship in the eschatological present.

The dismissal at the Divine Liturgy is often linked to the accolade of the people, especially if a bishop is celebrating. The acclamation of the celebrant, with the words ‘Lord, preserve for many years him who blesses and sanctifies us’, corresponds exactly to an episcopal Divine Liturgy. The giving of the blessing and the sanctifying are specifically an episcopal right. According to Symeon of Thessaloniki, only the bishop, of all the clergy, is able to exercise the function of illuminating and of transmitting Divine Grace, gifts that he received through the action of the Holy Spirit on the day of his consecration. A priest is acclaimed by the people as a celebrant of the Spotless Sacraments as a canonical concession and with the consent of the local bishop.

If a bishop is celebrating at the Divine Liturgy, the acclamation of the people is changed to ‘Lord, preserve our Leader and Bishop; for many years, Master’, with the phrase ‘for many years, Master,’ being repeated three times This acclamation is a compound and derives from Byzantium, from the patriarchal services in Agia Sophia in Constantinople, at which the emperor was also present. Here, the Leader or Master was the Byzantine emperor and the bishop was the patriarch. The people acclaimed both of them and sought the blessing of the Lord on the length of their days and their God-pleasing duties. On the one hand, the people ask the Lord to preserve and strengthen the secular ruler in his administrative functions and, on the other, entreat that the works of the bishop be supported and that he continue to perform services without impediment until the end of his term as hierarch.

After the fall of the empire to the Ottomans (1453), the emperor was no longer present. The acclamation of the people, however, remained in liturgical use, but was now directed solely to the bishop who was celebrating the Divine Liturgy. Symeon of Thessaloniki provides an interpretation of the phrase ‘For many years, Master’. According to Symeon, the wish is addressed to Christ, the Great King/Master and High Priest, Who founded and established the earthly kingdom and the office of hierarch. The bishop is acclaimed by the people as bearing the gifts of Christ’s own high priesthood. The ultimate recipient of the acclamation of the hierarch is Christ Himself, to Whom every invocation on the part of the congregation in the services should be addressed.