It is estimated that some 100,000-150,000 children under the age of 18 work in Greece. These are children who have left school, or never went in the first place (Gypsies, immigrants and refugees), minors who work afternoon hours, week-ends or in their holidays, after attending school in the morning. This is according to the ‘Arsis’ social organization for the protection of young people (which collected the data in collaboration with the National Centre for Social Studies, the National Statistics Office and the Democritan and Panteian Universities.

The difference between today’s under-age workers and those of the last decades of the 19th century and start of the 20th [in Greece], is that the latter were Greeks who were trying to supplement the limited income of the family.

Today, however, things are entirely different, since the minors burdened with the bad side of child labour are often below the age of ten and are the children of Gypsies, immigrants and refugees. Of course, there are also children in Greek families out in the country who assist in boosting the family income through work or who make their own pocket-money. For these children, work isn’t something that that degrades them bodily and spiritually. But the children who work as beggars, prostitutes, thieves, drug pushers, or as ‘organ donors’ are condemned to experience pain and misery of soul and body on a daily basis. 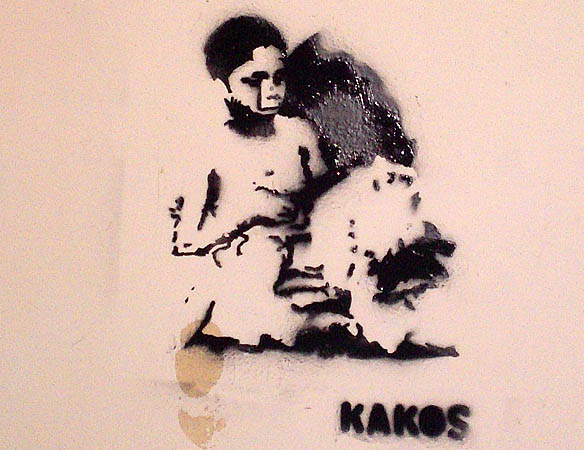 Even though employment of children under the age of fifteen is forbidden by Greek law, they are still considered to be contributing members of the family, provided they really are members of the family. The obvious question arises of how to control all those who employ children illegally. The Employment Agency is understaffed and it is objectively difficult for it to act in inaccessible regions, so it is there that the black market in child labour is flourishing.

The law is strict, but difficult to apply in practice. In legislative terms, Greece has ratified the international Convention on the Rights of the Child (UNCRC) on the definition of child labour and Convention 182 of the International Labour Organization on the worst forms of child labour. It has also passed a law (1837/1989) on the protection of minors from employment; included an article on the protection of working minors (Law 3144/2003) on social dialogue and the promotion of employment and social protection; and has included a reference to under-age victims of human trafficking in the relevant Law 923064/2002).

In Greece, laws can be ‘elastic for some, and in conjunction with the fact that bringing a case to trial is often a lengthy process- one to two years being the earliest- this leaves under-age workers in the country exposed to all kinds of exploitation. It has been said that Greece is first in terms of the violation of labour laws. Six out of ten enterprises that are re-inspected for violations of the labour laws are found not to have complied or have done so only partially. Nothing of the labour legislation regarding children is applied. Lots of people violate the laws because there are all-round benefits. And this is not the case only in Greece. The outlying areas of Paris are full of working children, while in the USA six of the seven international labour laws haven’t been ratified.

Child labour in Greek is in the margins of research, not because of indifference on the part of the various organizations, specialist scholars and universities but principally because the issue of employment, which is central to Greece’s relations with the European Union, must not have any ‘grey areas’. And since the word ‘prosperity’ is being used all the more frequently in political and economic circles in Greece, this labour data is a challenge to the whole concept. This data is camouflaged, or, even worse, simply ignored by the official state authorities. Besides, Greece has the unique distinction of being the only country which, to this day, leaves gaps in official European statistical reports.

With the policy being implemented today as regards the collection of data, the national statistic office, in the second quarter of 2006, found a total of 8,000 young working people aged 16-18. This is not the real number for Greece, however. The real, shameful data for the country indicates that between 100,000 and 150,000 minors under the age of 18 are working, and only 30,000 of them are legal. Unfortunately, within these numbers, it has been recorded that some of these minors are being employed in the worst forms of labour, such as work on the streets, prostitution, forced labour and so on. At the same time, 460,000 children below the age of 18 live below the poverty line in Greece, and the Pedagogical Institute, even without taking into account the Roma and immigrant population, estimates that around 40,000 children abandon school each year, before they have completed the obligatory nine years of their education, and enter the job market.