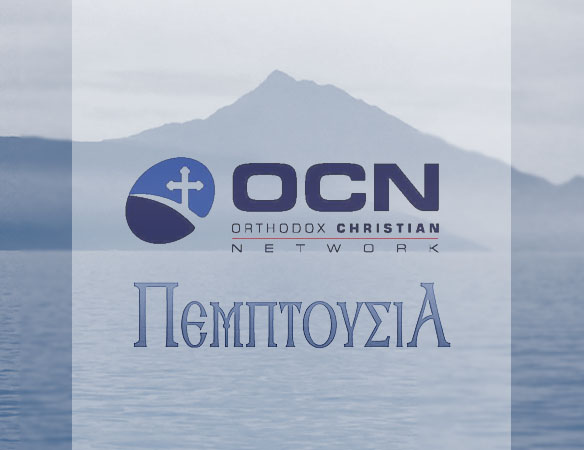 Athens and Ft Lauderdale (September 3, 2014) — On Wednesday, Pemptousia and the Orthodox Christian Network announced a strategic partnership to begin sharing and promoting each other’s content.

The two religious media organizations, which produce resources for Orthodox Christians and seekers in a variety of languages and formats, will begin a process of integrating selected web content, social media channels, and Internet radio programs.

“We are excited to partner with the Orthodox Christian Network to help people throughout the world learn about the truth and beauty of the Orthodox Christian faith,” said Nikos Gouraros, President of St. Maxim the Greek Institute and Head of Pemptousia. “As we implement our plans for a strategic partnership over the next several months, we hope to explore even greater levels of cooperation.”

“Both of our organizations are focused on serving the Church and awakening the world to God’s love in Jesus Christ,” said Fr. Christopher Metropulos, Executive Director of OCN. “Working together we will deliver a wider variety of programs to a larger audience, for the glory of God and the strengthening of His Church in the digital age.”

Visitors to Pemptousia and OCN’s various online offerings will start to notice cross-promoted content beginning very soon and then increased integration later in the year. Further details about the strategic partnership will be announced soon.

Pemptousia is published by the ‘SAINT MAXIM THE GREEK’ Institute for the Research, Preservation, and Promotion of Spiritual and Cultural Traditions. Pemptousia started from the desire of certain inspired persons that people should be able to recognize themselves, to discover their true nature and mission, and to find meaning in their lives. It was their deepest desire to communicate the “abundance of their hearts” and their experience to every person in the world, whom they saw as brothers and sisters. Many people, especially in the realm of the Church, have condemned the internet as a means of all kinds of corruption and have claimed that using it creates serious spiritual problems. Pemptousia (digitally published today in five languages: Greek, English, Russian, Romanian and Georgian –www.pemptousia.gr, .com, .ru, .ro, .ge) reverses that view, transforming the internet from a medium of all kinds of “consumerism” into a Philokalic one which will promote the best, most noble and most sublime manifestations of the human spirit. A Christian life and Philokalic spirit which are not ecstatic, which do not depart from the self in order to encounter the “Other,” our brother or sister, and which are unable to transcend linguistic, national and cultural differences, do not have genuine spiritual roots. In this context, Pemptousia will always seek ways of transmitting and communicating the spirit in which it is produced to every corner of the earth where there are souls thirsting for truth, beauty and joy.

The Orthodox Christian Network produces a wide variety of multimedia resources for Orthodox Christians and seekers in three languages: English, Greek, and Spanish. It is an agency of the Assembly of Canonical Orthodox Bishops of the United States of America. Founded nearly 20 years ago as a radio ministry, it continues to produce “Come Receive the Light,” a weekly radio show, and has expanded into a variety of online offerings: a weekly video newscast, a variety of podcasts, three Internet radio stations, live broadcasts of divine services and Bible studies, a website (http://myocn.net), and a very popular social media presence, especially on Facebook. OCN strives to work in collaboration with all Orthodox organizations and churches to communicate the message of God’s love in Jesus Christ and to strengthen the Orthodox Church in the digital age.