As I mentioned in a recent article on Elder Gedeon, I’ve been acquainted with this kelli for some time, since shortly after Elder Gedeon’s death. I was introduced, indirectly, by my wife and daughter, who came back from a trip into Thessaloniki with a young man whom we didn’t know. They’d seen him wandering around the Police Department and just knew (from his boots!) that he was planning a trip to the Holy Mountain. It turned out that he was a French Canadian called André and he was planning to go to the Skete of Prodromou because he felt that a Romanian ambience would be easier to adapt to. He did know Greek, though, and this is what had brought him to the Mountain. As a novice in a Roman monastery in Canada, he’d been tasked with translating the Fathers and became so interested that he left to come to Athos.

After a stay at Prodromou, he made his way to Colciu, when he found Elder Dionysios and Fr. John. He became a monk there – being given the name of Pierre (Petros, the brother of Andreas) and I was invited to his tonsure. It was a wonderful occasion and a trip back into another time. Elder Dionysios (and I) went down to Vatopaidi where he took delivery of two wooden crates of fish that he’d ordered for the meal after the tonsure. They came in flat wooden boxes and he took a length of rope and somehow attached them to the back of the mule in such a way that they were at right angles to the animal’s back and perfectly stable. (This was the same mule that met its end not long afterwards. It was lent to a monk in another kelli in the skete and he tied it to a branch in such a way that it was able to hang itself). 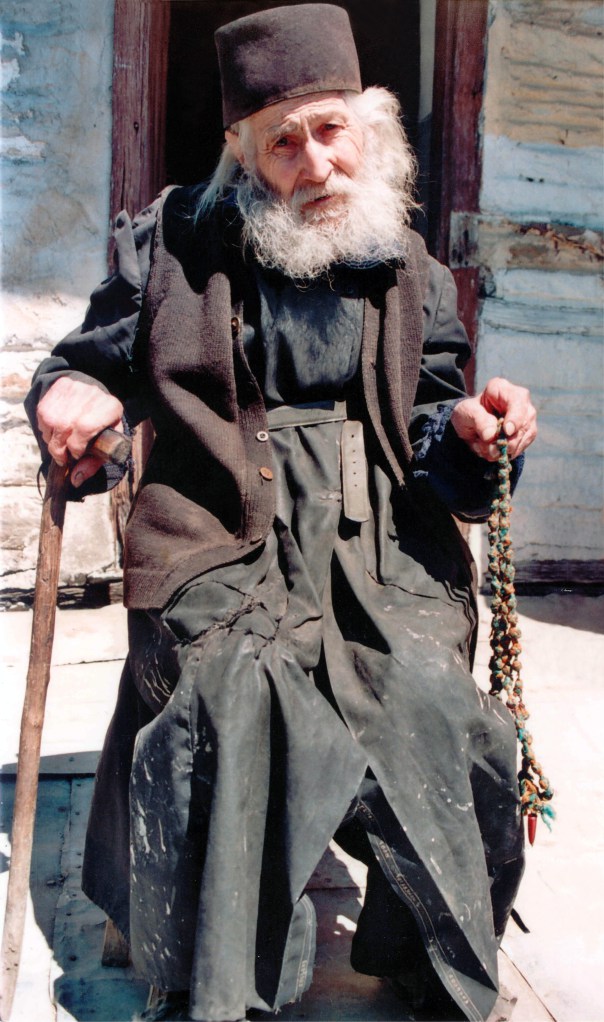 These fish, and all the rest of the cooking, were prepared by another Father John (Gutsu), who was then in his eighties. The meal was for more than a dozen guests and was cooked over wood on a stone slab with an iron grill arrangement. And it was no primitive affair. There was a delicious eel soup and the main fish course was accompanied by a delicate velouté sauce. This same Father John, when he was in his nineties, tripped in his garden one morning and broke his neck. He lay there all day in the heat of a Greek summer until after Vespers, when Fr. Pierre went to see him, as he did every day in case he needed anything. He was brought to Thessaloniki and spent some time, very chirpily, in hospital and then went back to his kelli and continued his ascetic life. 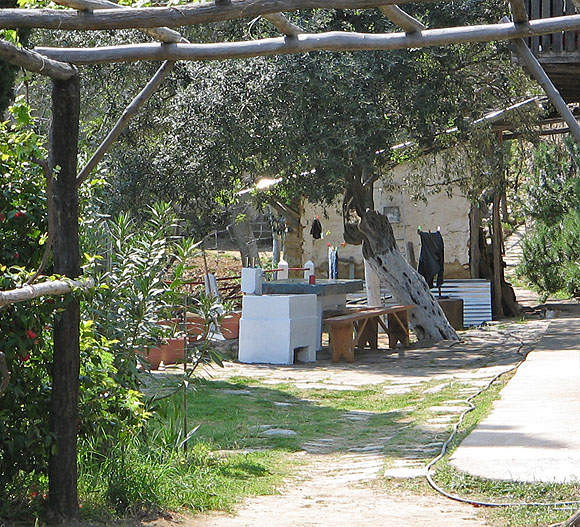 The courtyard of Skete Colciu

The Father John at Saint George’s had been a married engineer and came to the Mountain after his wife fell asleep in the Lord. He’s the only man I know to have named his son Coriolanus Brutus. One morning I went down to the chapel and he was saying – by heart – the Mattins kathismata (of the Psalms). He was barrelling along at a great clip, but when I came in he very sweetly slowed down considerably, no doubt so that I could make better sense of the words, with my non-existent Romanian. He did, however, have a smattering of French and the first time I met him he very kindly offered me some raki ‘Après la journée’. I was much taken with this notion, because it was late afternoon and it was – literally – refreshing to think that even in Athonite kellia they had a sort of cocktail hour between Vespers and Compline. It was only the next day, when I was leaving  at about 11 o’clock, well after Mattins and the Liturgy, and he offered me a raki – ‘Avant la journée’ – that I realised he’d been betrayed by a ‘faux ami’ and thought that ‘journée’ was ‘journey’ rather than ‘day’.

He was that rara avis among Athonite kelliotes in that he himself didn’t really drink raki to any great extent, so he was prone to doling out rather generous schooners of this potent tincture. Thus it was that one – I almost said memorable, but in fact I have no recollection of it at all – occasion ‘Before the journey’ became ‘Instead of the journey’.