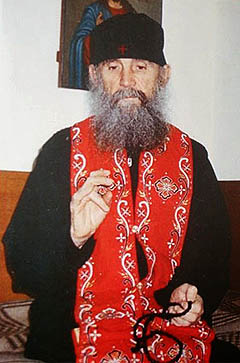 This confession of yours gave my soul much joy, because God and the angels, who were awaiting it, rejoiced. You succeeded in putting the devil to shame, who greatly rejoices when someone hides his thoughts from his spiritual father. When a snake leaves its lair, it rushes to hide somewhere because it feels as if it will be struck – the same thing happens with a diabolical thought, which is like a poisonous snake. When such a thought leaves a person’s mouth, it disperses and disappears, because confession is humility, and since Satan cannot even bear the smell of humility, how could he possibly remain after a humble, sincere confession? My child, I wish you a good beginning and cautious progress. Don’t be ashamed before me. Don’t see me as a man, but as a representative of God. Tell me everything, even if you have a bad thought about me, because I am experienced with demonic influences, and I know how the devil fights man. I know that spiritual children have simple hearts and that if evil thoughts come to them, it is due to the devil’s malice and the spiritual child’s ego, who is permitted to fall and have such thoughts against his Elder, so that the spiritual child may be humbled more. Therefore, don’t worry. I will always rejoice when you speak freely and sincerely to me, for without frank confession, there will be no spiritual progress.

My child, have no worries. I have taken up your burden. I only beg you to be at peace. Your words may be just on paper, but I feel the power, the meaning, and the essence of what you write; I enter into the spirit of your words. I entreat you to be at peace from now on. You are forgiven everything with the confession you made. Satan perceived your character and torments you, but without anything serious having occurred. Everything you write (that is, the thoughts that torture you) is a trick of the evil one to make you despair, be distressed, and so forth. Throw everything that happened to you into the depths of the sea. Map out a new course in your life. If you keep thinking the same way, know that you will become the laughing-stock of the demons. I beg you, just be obedient to me. After your confession, everything has been forgiven, so let bygones be bygones. Don’t scratch a wound that made you suffer so much. Don’t be deceived by the thought that it is your fault. If you hadn’t taken him to the doctors, etc., then such thoughts would rightfully fight you. Whereas, as things are now, you have fulfilled your duty. God wanted to take him, for a reason that only His infinite wisdom knows, while you are thinking you killed him! Be careful with this thought, or else it might lurk in your heart. It is a ruse of the devil to harm you, as he knows how. This skilled trickster has drowned in the depths of hell countless multitudes with despair. When something happens and the devil sees that a person is upset by it, his trick is to pile on a multitude of supposedly legitimate thoughts in order to lead the poor person to a great storm and drown him. (As the saying goes, a fox loves a scuffle). And when the storm passes, he sees that he was in danger of drowning in just a spoonful of water.

Humble yourself, and from now on confess, for confession contains most holy humility, without which no one is saved.  The devil greatly rejoices when he manages to persuade a person to hide diabolical thoughts.  This is because he will achieve his premeditated, soul-destroying goal.

I have written to you about the conscience, that we must be careful not to do something that will make it reproach and condemn us. Bear in mind that God sees everything and that nothing is hidden from His eyes. So how could I tell lies before God? Don’t you know that lies are from the devil, and that by not being careful, it becomes a practice, then a habit, and then a passion, and don’t you know that liars will not inherit the Kingdom of God? (cf. Rev. 21:8). Fear God. God is not pleased with material offerings when we neglect attending to our inner heart. But it is necessary to do these also without leaving the others undone. (cf. Mt 23:23). Attend to your conscience, for we do not know the hour of our death. And if we do not repay our creditor (our conscience, that is) everything we owe him, he will accuse us vehemently, without holding back. Then – alas! – our mouth will be silenced, not having any answer to give.

Every night, review how you passed the day, and in the morning review how the night passed, so that you know how your soul’s accounts are doing. If you see a loss, try to regain it through caution and forcefulness. If you see a profit, glorify God, your invisible helper. Do not let your conscience prick you for long, but quickly give it whatever it wants, lest it take you to the judge and the prison (cf. Mt. 5:25). Does your conscience want you to attend to your prayer rule* and regain prayer? Give it these things, and behold, you are delivered from going to the judge. Do not weaken the saving voice of your conscience by disregarding it, because later you will regret it to no avail.

* Prayer rule (κανών ) Α prayer rule consists of the prayers and metanoias** (prostrations) which one does daily, under the guidance of one’s spiritual father.

** Metanoia (μετάνοια) Ιn its primary sense, «μετάνοια» (pronounced ‘meh-tah-nee-ah’) means repentance, literally, ‘a change of mind’. However, it can also mean the specific act of making the sign of the cross, followed by a bow either down to the ground or to the waist. It is a gesture of reverence, worship, respect, or repentance. A typical prayer rule includes a number of metanoias done while saying the Jesus prayer. Some translators use the word “prostration” for this term.

See to it that you are sincere in your deeds as well as in your words, and especially in confession. For God searches out the hearts and reins (Ps. 7:9), and nothing remains obscure in the sight of His sleepless eye. Fear God; God is not mocked (Gal. 6:7); He is not fooled. He chastises severely when He does not see sincerity; so be careful. When you are disobedient and commit a secret sin, counteract it by openly revealing it in confession. Do not let your ego overcome you and make you hide the truth and remain uncorrected and passionate. Correct everything now if you want to see good days of dispassion*** and peace.

*** Dispassion (απάθεια) Dispassion is achieved when all three aspects of the soul (i.e., the intelligent, appetitive, and incensive aspects ) are directed towards God. It is the transfiguration of the passionate aspect of the soul (i.e., the aspect of the soul which is more vulnerable to passion, namely, the appetitive and incensive aspects ), rather than its mortification. Thus dispassion in this context does not signify a stoic indifference, but rather, a transfiguration and sanctification of the powers of the soul and eventually of the body also.