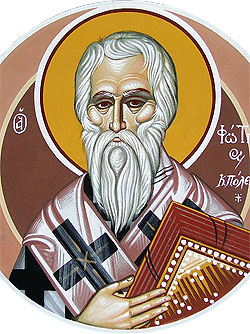 “Proof texting” is a well known problem, especially when it comes to interpreting Holy Scripture. Some people develop whole theologies around a narrow interpretation of a few scattered verses (or even isolated books of the Bible), ignoring what the Church Father’s called the skopos: the overall purpose or ultimate meaning of the apostolic message about God’s self-revelation in history and in the person and work of Jesus Christ.

Yet, just as it is possible to proof text the Bible, it is also possible to proof text the writings of the Holy Fathers — and it’s not a new problem. St. Photios the Great, who lived and served the Church as Patriarch of Constantinople in the 9th century, addressed the question of how to read and interpret the Holy Fathers in his famous “Letter to the Patriarch of Aquileia.” He writes:

Who is it that offends the Fathers? Is it not those who, enclosing the whole piety of those few Fathers in a few words and placing them in contradiction to councils, prefer them to the numberless rank? Or is it those who choose as their defenders the many Fathers? Who offends holy Augustine, Jerome and Ambrose? Is it not he who forces them to contradict the common Master and Teacher, or is it he who, doing nothing of the sort, desires that all should follow the decree of the common Master?

St. Photios continues, explaining that the Holy Fathers at times spoke imprecisely, and even at times made theological errors on individual questions. Yet these errors do not necessarily mean they are any less holy or worthy of our embrace.

Have there not been complicated conditions which have forced many Fathers in part to express themselves imprecisely, in part to speak with adaptation to circumstances under the attacks of enemies, and at times out of human ignorance to which they also were subject? … If some have spoken imprecisely, or for some reason not known to us, even deviated from the right path, but no question was put to them nor did anyone challenge them to learn the truth – we admit them to the list of Fathers, just as if they had not said it, because of their righteousness of life and distinguished virtue and their faith, faultless in other respects. We do not, however, follow their teaching in which they stray from the path of truth … We, though, who know that some of our Holy Fathers and teachers strayed from the faith of true dogmas, do not take as doctrine those areas in which they strayed, but we embrace the men. … we do not admit what is opposed to the word of the Lord, but we do not cast them out from the rank of the Fathers.

The challenge, then, is not merely to read or quote the Holy Fathers, but to interpret them. Doing so is not an easy task, nor is it an individual one: it can only be accomplished from within the life of the Church Herself.