A man blessed by God, Spyridon Angelidis, as he was before his tonsure, was born in Tripoli in the Peloponnese in 1830. In 1852 he arrived at the Monastery of Ayiou Pavlou with three friends. According to Abbot Serafeim, who died in 1960: ‘Casting off all secular care for material things, he devoted himself with zeal and self-denial to the service of the abbot and the other fathers, and having been tested in a variety of duties, was renamed Symeon’. Thereafter he was ordained deacon and served in the secretariat of the monastery. He then completed his studies at the Athoniada Academy and served in the secretariat of the Holy Community. 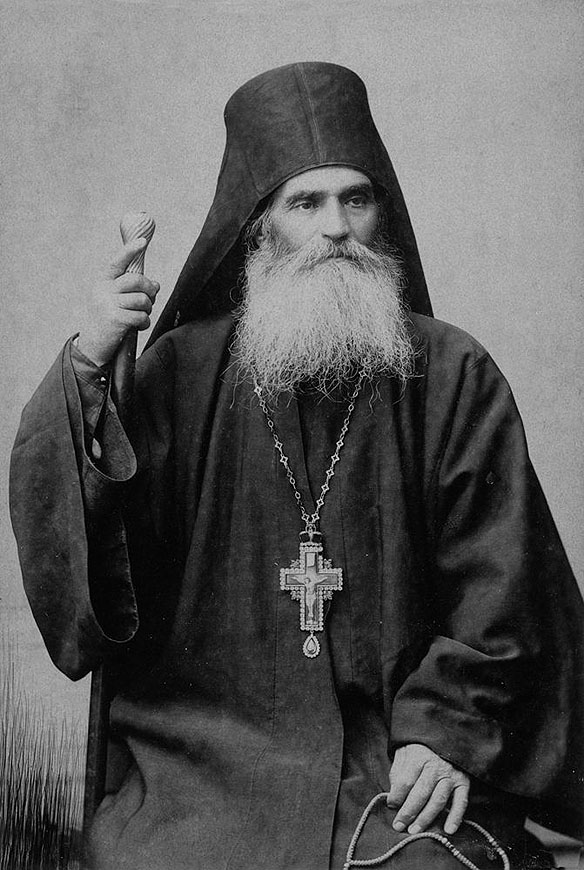 The fervent entreaties of the Fathers of the Monastery of Grigoriou took him to the abbot’s throne there, after he had first been ordained priest. He was taken to the monastery by his Elder, Sofronios Ayiopavlitis (†1882). In his customary, elevated style, Elder Gavriil Dionysiatis (†1983) writes: “This Coenobium was fortunate to have abbots who were well-known for their zeal on behalf of the Monastery, and first among these was the Hieromonk Symeon, also the new founder, who erected the splendid new residential quarters which are almost equal to the older, and also the most notable gateway. Having been invited from Ayiou Pavlou to be the abbot, he imposed his authority, though he was a stranger, through his austere mode of life, industry and friendship towards all, while his love of toil and exceptional efforts over the building of the new wing became proverbial. He was the first among the workers and, from morn till dusk, carried stones and other material on his back, without, however, omitting the slightest detail from his appointed spiritual labours’.

At one time, the monastery’s olive oil supply was greatly reduced and it was far from certain that it would last the year. The monk responsible, Ypatios, went to Abbot Symeon and asked if he should continue to serve oil. The answer was: ‘The oil is for all of us. If it’s enough, it’s enough for us all’. And they gave and gave, but the oil supply never dwindled. It stayed just as full in the jar, by the blessing of Abbot Symeon, the obedience of the servant Ypatios and the prayers of the monks who benefitted.

He went to his blessed rest in the Lord, as abbot, on 20th of October 1905. The most distinguished of his spiritual children was the most virtuous Athanasios (†1953), who later became abbot. Because of Symeon’s virtue and his many sacrifices, when his bones were removed from his grave, they gave off fragrance.

He served as abbot for 46 years and had many spiritual gifts. He was highly intelligent, perceptive, strong and hard-working. He set all his hope in God. He left an example of industry, zeal, wisdom and spirituality. 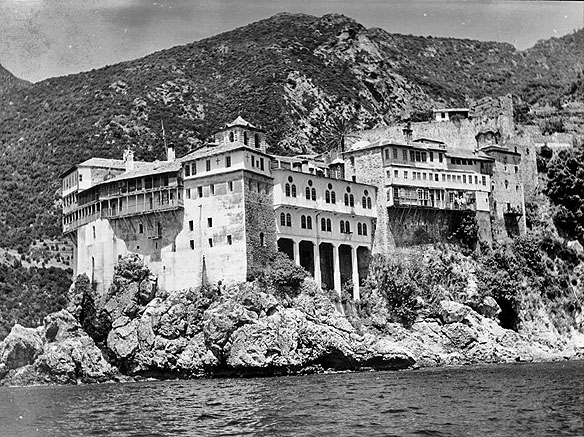 When A. Moraïtidis visited the monastery, he wrote that ‘the Athonite Symeon, the Peloponnesian, a man of rather tall stature and a most venerable Hieromonk, came to me accompanied by Father Varlaam, leaning on his abbot’s staff and blessing me in the most genial manner […] and with the sweet smile with which he gathered other devout men from the Peloponnese to live as monks with him, proving to be his obedient and humble sons. After the usual formal speeches, we spoke at length about this hesychast Coenobium, the latest renovations to which are due entirely to the progressive activity of this Peloponnesian abbot, whose ambition it was to make this small monastery great and wonderful, in terms of the number of monks and of their virtue. The result is that today it is preferred above many other monasteries by those who desire their own salvation. For its order and meticulous observation in prayer and the most complete refectory, within the restrictions of the monastic rule, which provides sustenance to all those monks who bear the weight of service and obediences from the dead of night until sunset of the next day- kneading, cooking, baking, and working in the tailor’s shop, the cobbler’s, the garden, the landing-stage, unloading the abundance of produce which the monastery’s caïque brings in from its dependencies, for all of this, and the renovation of the walls and the addition of a new wing, new monks and a new regime, Abbot Symeon enjoys the reputation of being the new founder of this monastery’.