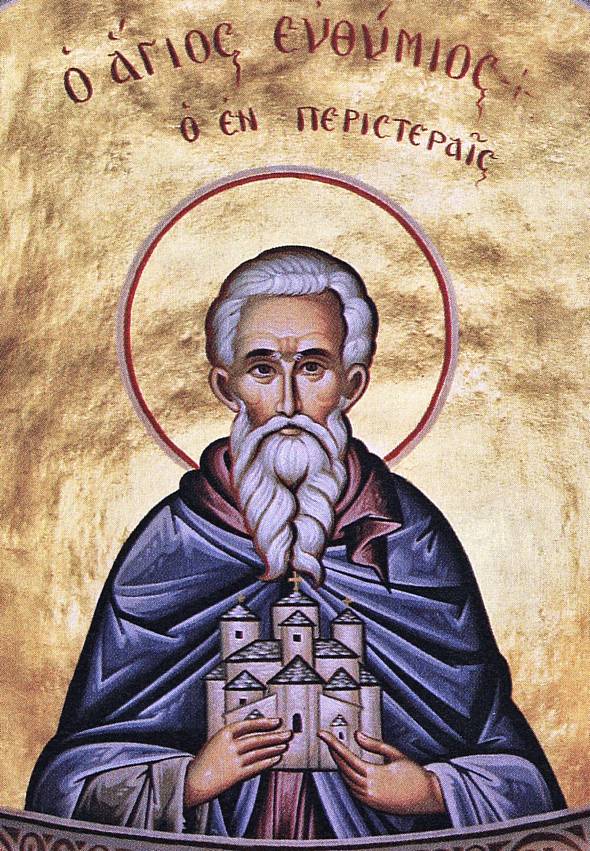 Saint Euthymius the New of Thessalonica and Mt Athos, in the world was named Nicetas, and he was a native of the city of Ancyra in Galatia. His parents, Epiphanius and Anna, led virtuous Christian lives, and from childhood their son was meek, pious and obedient. At age seven he was left fatherless and he soon became the sole support of his mother in all matters. Having entered military service, Nicetas married, on the insistence of his mother. After the birth of a daughter, he secretly left home in order to enter a monastery. For fifteen years the venerable Euthymius lived the ascetic life on Mount Olympus, where he learned monastic deeds from the Elders. 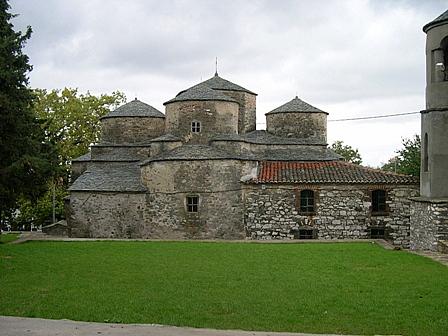 The Church of Saint Apostle Andrew, now in Peristera, was built by Venerable Euthymius as the katholikon of the Peristeron Monastery

The monk went to resettle on Mount Athos. On the way he learned that his mother and wife were in good health. He informed them that he had become a monk, and he sent them a cross, calling on them to follow his example. On Mt Athos he was tonsured into the Great Schema and lived for three years in a cave in total silence, struggling with temptations. St Euthymius also lived for a long time as a stylite, not far from Thessalonica, instructing those coming to him for advice and healing the sick. 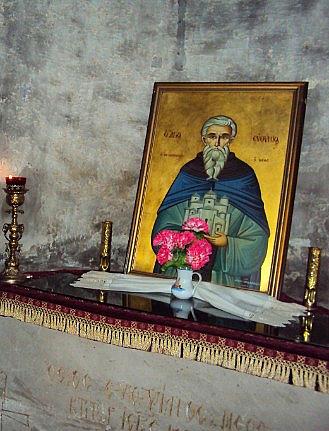 The tomb of Venerable Euthymius

The monk cleansed his mind and heart to such an extent that he was granted divine visions and revelations. At the command of the Lord, St Euthymius founded two monasteries in 863 on Mount Peristeros, not far from Thessalonica, which he guided for 14 years, with the rank of deacon. In one of these his wife and mother received monastic tonsure. Before his death he settled on Hiera, an island of Mt Athos, where he reposed in 898. His relics were transferred to Thessalonica. St Euthymius is called “the New” to distinguish him from St Euthymius the Great.