Son of famous Romanian philosopher Constantin Noica, Father Raphael was born in 1942. He received only a basic Christian education (practicing the faith in his family was reduced only to participating at the Paschal Service, to light a candle).

At 13, he emigrates with his mother (of British citizenship) and his sister in England, to escape the Communist rule in Romania (his father has to stay behind). The searches specific to that age were also manifested on a spiritual level. He joins the Anglican Church only to realize that there “atmosphere was very impoverished, very cold, even boring – not in a way that you would start to yawn in church, but because it wasn’t in any way nourishing.”

He goes then to Pentecostals, Congregationalists, Salvation Army etc.; he remains for a while within Baptist Community (a year and a half). In Protestantism, he stumbles especially at the biblical texts regarding Holy Communion and, in one day, he feels “like a light in my soul, the thought to return to Orthodoxy.” He providentially meets Father Sophrony, the spiritual guide of Essex Monastery, who advised him to finish his studies. 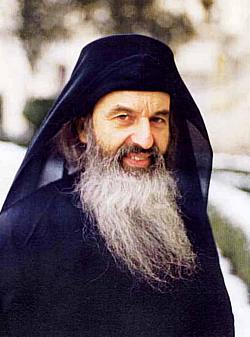 He returns to Orthodoxy in 1961, and he’s tonsured at Essex Monastery by Father Sophrony, monasticism being for him “the answer to all the questions arose since childhood.” He considers the Protestant wandering as a work of God with him, because “if I wouldn’t live Orthodoxy as a convert, maybe I wouldn’t be able at all to see it in its splendid beauty, as the only truth of history.”

He returns to Romania in 1993, after 38 years of exile, “like the paralytic of Gospel”, and he makes some short visits, undertaking (at request) some conferences in various places of Romania; since then, he settles in a hesychasterion of Apuseni Mountains (Western Carpathians). Aside his most important and great help to the world by his prayers, Father Raphael translated into Romanian the works of his Elder, Archimandrite Sophrony, and of Saint Silouan the Athonite, his spiritual “grandfather.”

As for his personal work, Fr. Raphael says: “I wrote only one book, which I called Thoughts. I wrote it at someone incentive, who expected son of Noica to write a book. And when he opened that book, the first page was blank, the second page was blank, and so were all the others. Now, being towards the end of my life, I consider writing another book and call it Memories, because this is what all the great men did. But, since I’ve lost my memory, this book will be alike the first one.”

Still, two books bear his name, both being collections of his Romanian homilies and conferences over the last 20 years: The Other Noica and The Culture of the Spirit.