The first hierarch, the highest and closest to the Most Holy Trinity, consists of the SERAPHIM, CHERUBIM, and THRONES.

The God-loving six-winged SERAPHIM stand closer than all before their Creator and Mker, as the prophet Isaiah saw, saying: “And the seraphim stood around Him, each having six wings” (Isaiah 6:2). They ar fire-like since they stand before That One of Whom it is written: “For our God is a consuming fire.” (Heb 12:29); “His throne was a flame of fire” (Dan 7:9); “the appearance of the Lord was like a blazing fire” (Ex 24:17). Standing before such glory, the seraphim are fire-like, as it said: “Who maketh his angels spirits; his ministers a flaming fire” (Ps 103:4). They are aflame with love for God and kindle others to such love, as i shown by their very name, for “seraphim” in the Hebrew language means: “flaming”. 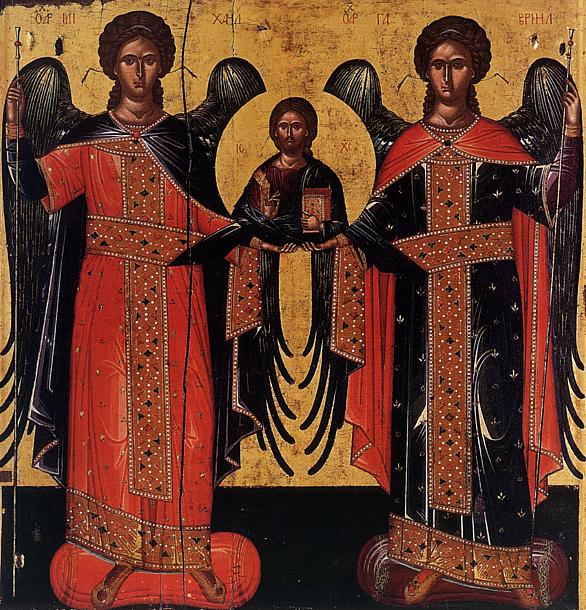 The Archangels Michael and Gabriel

After the seraphim, before the All-knowing God, Who resides in inaccessable light, stand the many-eyeed CHERUBIM in ineffable radiance. More than the other lower orders of angels, they are always radiant with the light of th knowledge of God, with the knowledge of the mysteries of God and the depths of His Wisdom; being themselves enlightened, they enlighten others. Their name “cherubim” in translation from the Hebrew language, means: “great understanding” or “effusion of wisdom”, because throught the cherubim wisdom is sent down to tohers and enlightenment of the spiritual eyes is given for the seeing of God and knowledge of God.

Thereafter stand the God-bearing THRONES (as St Dionysius the Areopagite calls them) before Him Who sits on the high and exulted throne, being named “thrones” since on them, as on inctellectual thrones (as writes St Maximus the Confessor) God intellectually resides. They are not called “God bearing” according to essence but according to grace and according to their office, as the flesh of Jesus Christ (as St Basil the Great writes) is called “God-bearing” according to essence since it was indivisibly united with God the Word Himself. The thrones are then called “God-bearing” not according to essence but according o grace, given for their service, which is mystically and incomprehensibley to bear God in themselves. Residing on them in an incomprehensible manner, God makes His righteous judgement, according to the word of David: “Thou hast sat upon a throne, O Thou that judgest righteousness.” (Ps 9:4). Therefore through them the justice of God is pre-eminently manifesed; they erve His justice, glorifying it and pour out the power of justice onto the thrones of earthly judges, helping kings and masters to bring forth right judgement.

Th middle hierarchy also consists of three orders of holy angels: the DOMINIONS, the VIRTUES, and the POWERS.

The DOMINIONS are so nemed because, being themselves free, they dominate over the rest of the angels which follow behind them. Having abandoned servile fear, as St Dionysius the Aeropagite says, they voluntarily and with joy serve God unceasingly. Also they send down power for prudent governing and wise management to authorities on the earth set up by God. Further they teach how to control the senses, how to subdue in oneself dissolute desires and passions, how to enslave the flesh to the spirit, and how to rule over one’s will and be above all temptations.

The VIRTUES, [the usual translation of the name of this order of angels as “virtues” is readily misleading if the old meaning of the word “virtue” as “power” or “force”, especially as regards to divine beings (cf Oxford English Dictionary), is not remembered. Note of translator.] filled with divine strength, quickly fulfill the will of the All-High and Omnipotent Lord, strong and powerful. They both work very great miracles and send down the grace of miracle-working to God’s saints, who are worthy of such grace, in order that these may work miracles, such as heal every sickness and foretell the future. The holy virtues also help people laboring and those overburdened by the bearing of an obedience placed on them by someone – by which their names “virtues” is explained – and they bear the infirmities of the weak. They also strengthen every man in patience, so that he does not faint away in affliction but rather bears all misfortune with a strong spirit, courageously, and with humility, giving thanks for everything to God, arranging all for our benefit.

The POWERS are so called because they have power over the devil, in order to restrain the power of the demons, to repulse the temptations brought upon people by them, and to prevent the demons from harming anyone to the degree that they would wish. The powers strengthen the good ascetics in spiritual struggles and labors, protecting them so that they may not be deprived of the spiritual kingdom. They help thos wrestling with passions and vices to cast out evil thoughts and slanders of the enemy and to conquer the devil.

In the lowest hierarchy there are also three orders: the PRINCIPALITIES, the ARCHANGELS, and the ANGELS.

The PRINCIPALITIES are named thus because they have command over the lower angels, directing them to the fulfilment of divine orders. The management of the universe and the keeping of all the kingdoms and princedoms, of lands and all peoples, races and nations, is also entrusted to them since each kingdom, race and people have for themselves a special deeper and manager from the heavenly order called the principalities, for all their country. Further, the service of this angelic order (according to the explanation of St Gregory the Dialogist) consists in teaching the people to requite each person in authority according to his calling. Finally, the angels of this order raise worthy people to various honorable offices and direct them so that they take power not for the sake of their own gain and benefit, nor for the sake of love of honr and vain renown, but for the sake of honor from God, for the sake of spreading and augmenting of His holy glory, and for the sake of the benefit of their neighbors – as serving the general needs of all their subordinates.

The ARCHANGELS are called the great heralds of good news, announcing the great and most glorious. Their service (as the great Dionysius the Aeropagite says) consists in revealing prophecies, knowledge, and understanding of God’s will which they receive from the higher orders of angels and announce to the lower order, ie. the angels, and through them, to men. St Gregory the Dialogist says that the archangels strengthen people in the holy faith, enlightening their mind with the light of knowledge of the holy Gospel and revealing the mysteries of devout faith.

The ANGELS are the lowest of all the orders in the heavenly hierarchy and the closest to man. They aannounce the lesser mysteries and intentions of God and teach people to live virtuously and righteously before God. They are appointed to guard each of us who believe: they sustain virtuous people from fallen, and never leave us though we have sinned, but are always ready to help us, if only we ourselves want it.

All of the heavenly orders are also called by the common name “angels”. Although they have different names according to their situation and grace given by God (as seraphim, cherubim, thrones and the rest of the orders), yet all in general are called angels, because the word “angel” is not a denomination of essence, but of service, as it is written: “Are they not all ministering spirits, sent forth to minister” (Heb 1:14). But their service is different and not identical: each order has its own service; for the All-Wise Creator does not reveal the mystery of His design to all to the same degree, but from the one to the others, through the higher He enlightens the lower, revealing to them His will and commanding it to be as in the book of the Prophet Zachariah. There it is said that one angel, after conversing with the prophet, met another angel who ordered him to go again to the prophet and reveal the future fate of Jerusalem: “And behold, the angel that talked with me went forth and another angel went out to meet him, and said unto him, Run, speak to thes young man (that is, the prophet Zachariah), saying, Jerusalem shall be inhabited as towns without walls for the multitude of mena and cattle therein: For I, saith the Lord will be unto her a wall of fire round about” (Zach 2:3-5).

Deliberating about this, St Gregory the Dialogist says, “When one angel says to the other: ‘Run speak to this young man’ there is no doubt that certain angels send others, that the lower ones are sent, that the higher send” (St Gegory the Dialogist, Interpretation of the Gospels, #4).

We find exactly the same thing in the prophecy of Daniel, that one angel orders another to interpret the vision to the prophet. From this it is evident that angels of higher orders reveal the divine will and intention of their Creator to angels of the lower orders, that they enlighten them and send them to people.

The Orthodox Church militant, being in need of the help of the angels, celebrates the Assembly of all the nine angelic orders with a special supplication, as is fitting, on the eighth day of the month of November (Nov 21 OS) ie. the ninth month, since all these nine orders of angels will gather on the day of the Terrible Judgment of the Lord, which the divine teachers of the Church call the eighth day. For they say, at the end of seven thousand years will begin as if an eighth day, “When the Son of man shall in His glory, and all the holy angels with Him” (as the Lord Himself foretold in the Gospel – Matt 25:31). “And he shall send his angels with a great sound of a trumpet, and they shall gather together His elect from the four winds.” (Matt 24:31), ie. from the East, West, North, and South.

Source: The Minea of St. Dimitry of Rostov 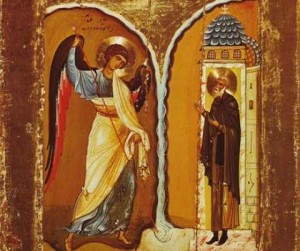 Miracle at Chonae by Archangle Michael 7 November 2011 Michael, the great and chief commander of God's bodiless hosts, both before the incarnation and after, showed compassion and solicitude toward the race of man ...