The Human Sensitiveness about Life and Death

“There was a certain rich man …
and a beggar named Lazarus”

In this parable, Jesus the Lord uses, conscientiously a lot of striking contrasted pictures, and He reverses very many situations. There are two spectacles taking place in two different times of life. The one belongs to our temporary earthly life; whereas the other belongs to the eternal everlasting life.

The huge contrast described by Christ himself between the position of the beggar and the rich man, as in life as after death, provokes and prompts us to reflect deeply in the cause of these reverses and contrasts. In heaven, the beggar Lazarus is setting in the bosom of Abraham; but the rich man in Hades, from far away, is now begging. Lazarus, who was on earth suffering, is now in heaven consoled; and the rich man who was egoistically enjoying his goods on earth is now tormented. 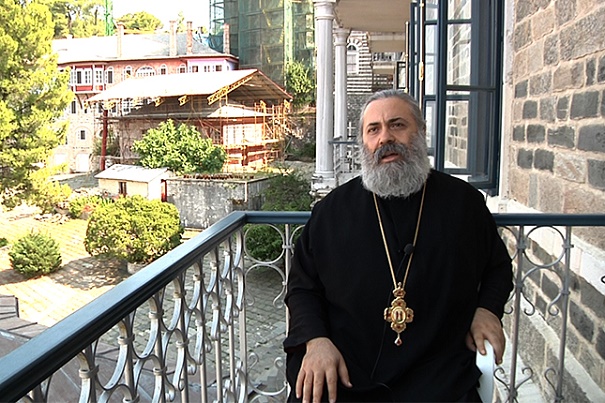 The question, which arises immediately to our minds, is: Why didn’t the rich man notice this huge difference between his high life and the poverty of Lazarus?

The poor man was laying at his door, covered in sores, which the dogs licked… the poor man, as it is described, was laying in the middle of the rich man’s world. This rich man was seeing the beggar every second, but he was integrated and completely involved in his manner of life, without paying attention to the other and to the appeal of the different world that was close to him. He was really seeing this misery around his luxury, but that didn’t create in his soul any sensitivity, he was seeing but not feeling.

How many times did this rich man pass by this poor man at his door and nothing happen? He was not moved to help this beggar. Why didn’t this terrible difference touch his soul?

Why this great luxury couldn’t draw attention to the basic rights of life? There might be many different causes, nevertheless we can summarize all these causes in the three following ways.

The first is “ignorance”. The rich man ignored both the source and the destination of his wealth. He, surely, has created for himself an erroneous theory ‑vision of happiness and life. That means he was ignorant, or to use the biblical expression, ‘fool”; he ignores the truth of the matters.

So this ‘fool” didn’t pay attention to Lazarus because, he believed that the poor man had no right, at all, to share in “his” belongings and goods. Basically he thought, that what he had was his alone. Or, better to say, each person is only concerned about oneself. And every one will reap what he sows. Every one has to care about him only, without having any responsibility for the others. This mentality describes exactly the situation of our society nowadays. Didn’t Cain use exactly these words answering God when he killed his younger brother saying: “Am I my brother’s keeper?”, In other words he said. “Am I responsible for my brother, and others? “.

In reality, these words were not those of a real brother, but of the first murderer in the scriptures. These words do not express the brotherly relationship so much as the murderous intention!

The second cause is “Luxury”. The Gospel emphasises the extravagance of this man. Who defines his goal on life as Luxury, and makes it­ an Idol of a false gold. This Idol steals the efforts of man and prevents him from serving God and the neighbour. Luxury’s Idol blinds man from seeing others, and concentrates his intentions on himself. Luxury forces him to satisfy his every whim and desire. So he tends to exploit everything and everybody. He can see nothing but the occasion to satisfy “his own” appetites. And as the Psalms says:” the man who trusted in his great wealth and grew strong by destroying others ” (52:7). God has lavished us with His goods, so as to deliver and free us from the slavery of needs, and not to feed and develop our selfishness. Luxury enslaves us to our desires, instead of freeing us from needs.

Thirdly, when bad habits become routine and engrain (strongly acquired) they destroy any possibility of repentance. Habit prevents any change.

When the rich man, for the first time, accepted seeing Lazarus without doing anything for him, he started to loose his human sensitivity. This bad habit grew and he got used accepting his sin, and to be hardened in it. When he first accepted to be unconcerned with Lazarus he sowed the seed of insensitivity. This rich man did not use to question this habit. Is this a good habit or bad? Is this a virtue or a sin? Is this a truth or a lie? This habit blinded his eyes.

We have really to examine our habits from lime to time. A matter which we can not do on our own, when we have already been used to some habit. So we need means of warning! The best means, in fact, is the Divine Word.

The word peels away the hardness of our vision. The Word, as the divine Sound can, as in the case of St. Paul in Damascus, take away the “something like Scales” (Acts 9:18), the Divine Word is a light reflected on to our life and its habits, and uncovering to us the truth, which is within it, or the contrary.

The Divine Word reminds us of our responsibility, which we have forgotten. This light of the Word discovers the other laying at our doors, and reminds us that he exists, he needs, he loves, and he deserves our love, he is more important than sumptuous foods and dresses. Word cries out instead of the silent neighbour, I am here, 1 am your brother, your fellow servant of our common God, the Father.

The Word, finally, reminds us that God is waiting for our reactions toward our neighbour. The Word proclaims, clearly, that God has sent us as apostles and assistants to Him in our environment, to help others. We will be criticised for our charity with others. The criterion is Love.

The Divine Word is the most terrible foe of “Habit”, it is a loud voice calling us to repentance, and leads us to watch ourselves.

There for as the answer to the requirement of this rich man, to send someone to warn his relatives, Jesus advises us to hear and obey the scriptures, Moses and the prophets, i.e., the Divine Word which we have always among us to help us.

This parable plays the same role in today’s reading. It is warning us, and illuminating our doors to see who is now laying there, whom God has put to test our Christian life by His light.