In this Gospel passage the word soul is repeated many times. At one moment, we hear Jesus asking us to lose our soul, and another time to save it. We need to be careful to discern two meanings that the word “soul” carries in this passage. In order to clarify the meanings and His intentions, the Lord Jesus speaks about the same meaning in different places explaining his words and commandments. It is clear that in every place, the Lord speaks about the two opposing meanings of the soul. 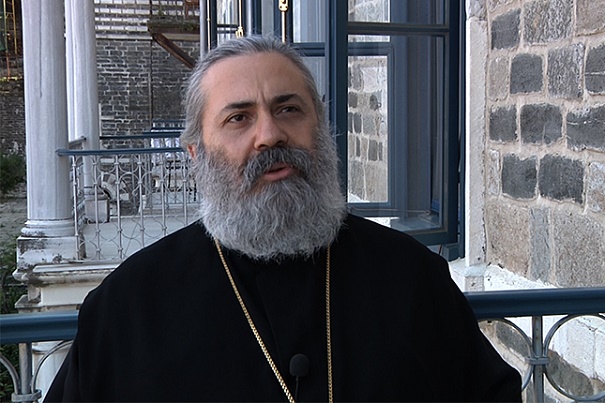 The first meaning of the soul, in which Jesus asks us to lose it, deals with caring for ourselves, amassing wealth and fulfilling the passions of the soul, and the like, that we look to care for ourselves, forgetting about  Jesus and others. It is clear that the soul which Jesus asks us to save is our self and true life, of which the whole world will not be worthy. So we have to discern between that which is for our soul and that which is our soul.

Do I have children? Then I can continue my existence. Do I have a social position? Then I exist.

To win the world, I have to run after supplying myself with these essentials for life. Today’s man fights nonexistence by owning. He feels secure by having health, glory and great storage rooms.

Existence is life, and securing the soul means assuring its existence. This consumer philosophy was mentioned in the Gospel, “Soul, thou hast much goods laid up for many years” (Luke 12:19). The Lord named this philosophy as a foolish one.

“I have” is an assurance for man’s life who seeks to care for and save his soul even if this was at the expense of “who I am.” In this way, he runs to win the world thinking that by owning the world, he will secure his life. He sells his soul as a ransom and becomes ashamed of the Lord’s words and the faith to gain a position or money or to own more.

The father who sends his son to work at an early age has sold his sons and gained much money, but he lost himself as “being a father.”

The mother who sells her daughter to gain something from the world, has lost herself “being a mother.” There is the politician who buys and sells on the expense of his principles. Such a person gains things for himself but loses himself. The Ambassador who goes to a foreign land to buy and sell as if he was one of those foreigners, and builds houses on a land which he will forsake has gained for himself only to find he has lost his true self.

Man is who he is and not what he has.

The Christian is like a wise merchant sailing on troubled waters. Whenever the storm is hard, he needs to throw out all his cargo in order to survive with the ship. What benefits man if he carries all the goods of the world and loses his life.

What does it benefit a man if he secures everything for his life and loses his soul?

The Gospel clarifies exactly that I exist not when I own or when I think, but when I carry the Cross and deny what is mine. I deny even a material gain if the latter makes me ashamed of Christ. I exist when I follow Christ.

“I am who follows Jesus.” This is the only life assurance I have when I am a witness of and faithful to Him, when I am His Ambassador. For me the world is a place for preaching and not for commercializing. The assurance of my life is the Cross and not the devious ways of the world. And my identity and soul cannot be ransomed by anything earthly.

Whoever wants to save his life “through what he has” shall lose it, and whoever loses what he has for Christ and the Gospel shall save it.
Amen!