Saint Arsenius was born on January 31, 1800 in Ioannina, Epirus of pious Orthodox parents. In holy Baptism he was given the name Athanasius. His parents died when he was quite young. He was only nine years old when he made his way to Kydoniai, Asia Minor, where he was received by Hieromonk Gregory Saraphis and enrolled in his school. His humility and piety endeared him to Fr Gregory and also to the other teachers. The boy remained at the school for five years, surpassing the other students in learning and in virtue. 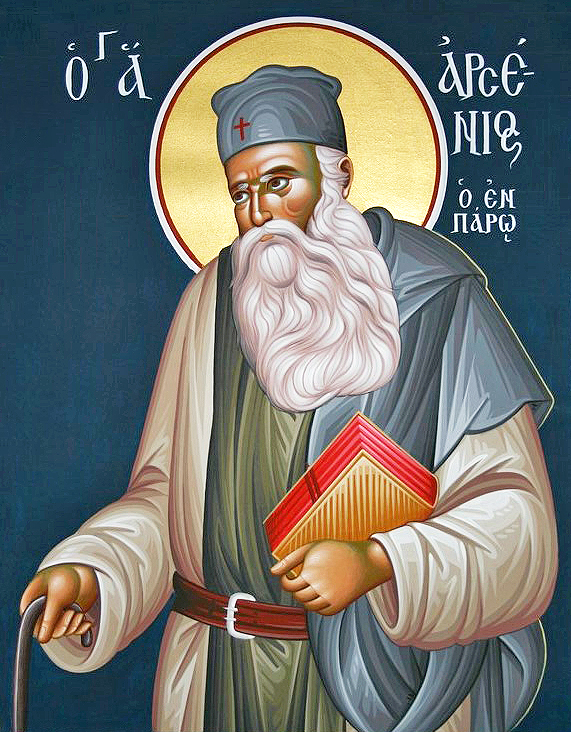 One day the renowned Spiritual Father Daniel of Zagora, Thessaly came to the school to hear confessions. Athanasius became Daniel’s disciple, remaining with him until the latter’s death.

Not long after this, Fr Daniel decided to go to the Holy Mountain for quiet and spiritual struggles. Athanasius begged his Elder not to leave him, but to take him with him. He expressed the desire to travel to Mt. Athos, the Garden of the All-Holy Virgin, and to become a monk.

Fr Daniel instructed Athanasius in the monastic life, which is called “the art of arts, and the science of sciences.” The holy Elder was a perfect teacher who was accomplished in the spiritual life, and Athanasius was an attentive student. After a time Fr Daniel tonsured his pupil, and told him he had to learn three important lessions. First, he must cut off his own will. Secondly, he must acquire humility. Finally, he must learn obedience. “If you cut off your will, if you become humble, and if you practice perfect obedience, you will also make progress in the other virtues, and God will glorify you.”

After a further period of testing, Fr Daniel tonsured Athanasius into the Great Schema and gave him the name Arsenius. The saint remained on Mt. Athos with his Elder for six years. Then they had to leave the Holy Mountain because of the agitation against the so-called “Kollyvades,” who called for a strict adherence to Holy Tradition. The name comes from the kollyva (boiled wheat) used in the memorial service. Part of the controversy involved the debate on whether it was proper to serve memorial services for the dead on Sunday. The Kollyvades believed that these services were inappropriate for the Day of Resurrection, but should be served on Saturday. The Kollyvades advocated frequent Communion, rather than the practice of receiving the Holy Mysteries only a few times during the year. When Fr Daniel and St Arsenius left Athos, it was probably due to the animosity of those who opposed the Kollyvades. 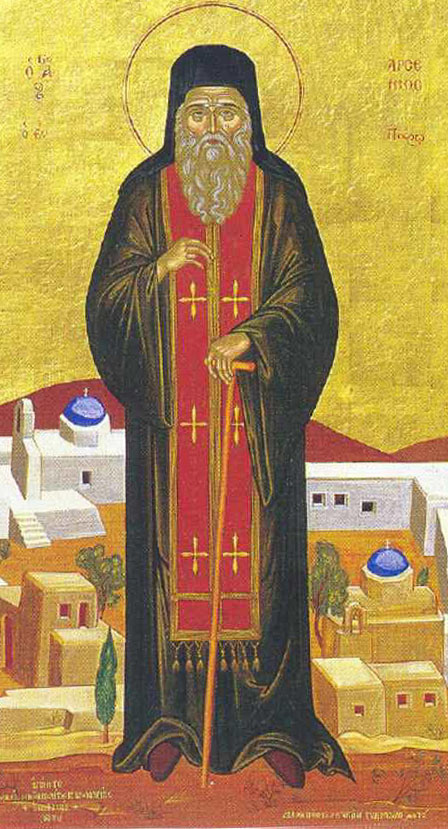 Early in 1821, before the Greek War of Independence, they went to the Monastery of Pendeli near Athens. Their stay was a brief one, for Fr Daniel forsaw the destruction of the monastery by the Turks.

The two made their way to the Cyclades Islands in the southern Aegean Sea. First they stopped at Paros, perhaps because some of the Kollyvades had settled there. Eventually, they decided to live on the island of Pholegandros. Since there were no teachers for the children, the inhabitants entreated Fr Daniel to allow St Arsenius to instruct their children. The Elder agreed, and had Arsenius ordained as a deacon. Then he was appointed to the teaching post by the government.

The saint remained there as a teacher from 1829-1840. He taught the required subjects in school, but he also helped his students to form a good character, and to live as pious Christians.

In 1840 St Arsenius entered the Monastery of St George on the island of Paros. Elder Daniel had passed away in 1837. Before his repose, he asked his disciple to take his remains to Mt. Athos after two years. St Arsenius left Plolegandros in obedience to Fr Daniel’s request, planning to stop on Paros then continue to the Holy Mountain. On Paros the abbot of St George’s Monastery, Fr Elias Georgiadis, told St Arsenius that it was God’s will for him to remain on Paros. This was providential, because Mt. Athos was undergoing great difficulty after the Greek War of Independence. 3,000 Turkish soldiers occupied Athos, resulting in the departure of 5,000 of the 6,000 monks.

St Arsenius joined the community at St George’s Monastery on the northern end of Paros. There he found spiritual strivers of true wisdom and excellent conduct, who were worthy models for him to follow.

When he was ordained to the holy priesthood at the age of forty-seven, St Arsenius intensified his spiritual efforts. Every day he studied the Holy Scriptures and the writings of the Fathers, and became adept at the unceasing prayer of the heart. He also began to show forth the gift of tears. In this, he resembled his patron St Arsenius the Great (May 8), who continuously wept tears of contrition.

Gradually, the inhabitants of Paros came to recognize him as an outstanding Father Confessor and spiritual guide. Whenever he stood before the holy altar, he felt that he was standing before God. He served with great compunction, and his face often became radiant like the face of an angel.

As his virtues became known to people, they flocked to him from near and far. He received all with paternal affection, treating each one with the proper spiritual medicine which would restore their souls to health.

A certain girl from Syros came to the Convent of the Transfiguration to visit her sister, who was a nun. The nun had previously been informed that her sister had fallen into a serious sin. When she learned that the girl was outside the doors of the convent, the nun screamed at her, “Go far away from here. Since you are defiled, you will defile the convent and the nuns.” Instead of feeling pity for her sister, and trying to lead her to repentance, the nun and some of the other nuns struck the poor girl and told her to go away.

The wretched girl cried, “I have made a mistake. Forgive me!”

The nun shrieked, “Go away, or I will kill you to wash away the shame you have brought to our family.”

“Have you no pity, my sister, don’t you share my pain?”

“No,” the nun shouted, “you are not my sister, you are a foul harlot.”

“Where shall I go?” she sobbed.

“Go and drown yourself,” was the heartless reply.

The poor girl fled from the convent, bleeding and wounded, intending to kill herself. At that very moment, St Arsenius was on his way to visit the convent. Seeing the girl in such a state, he asked her what was wrong. She explained that she had been led astray by corrupt men and women. Realizing her sin, she went to the convent to ask her sister for help

“See what they have done to me, Elder. What do you advise me to do? Shall I drown myself, or leap off a cliff?”

“I do not advise you to do either, my child. If you wish, I shall take you with me and heal the wounds of your soul and body,” he said gently.

“Where will you take me?” the miserable girl asked.

“To the convent, my child.”

“I beg you not to take me there, Elder. My sister and the other nuns said they would kill me if I came back.”

The saint replied, “Do not be afraid. They will not kill you, because I shall entrust you to Christ, and no one will be able to harm you.”

“Very well,” she said, “If you entrust me to Christ I will not be afraid of them, for Christ is more powerful than they.”

St Arsenius led her to the convent, consoling her and encouraging her to repentance and confession. After hearing her confession, he made her a nun. Then he called all the nuns into the church and severely rebuked those who wounded the girl. He reminded them of the parable of the Prodigal Son, and of how Christ had come to save sinners. He often associated with sinners, showing them great love and mercy.

“You, however, have done the opposite. Though you knew that her soul had been wounded by the devil, you did not feel sorry for her. You did not embrace her and try to save her from further sin, but you attacked her and beat her. Then you urged her to kill herself. Now I, your Spiritual Father, tell you that you are not nuns, you are not Christians, you are not even human beings. You are devoid of compassion, affection, and sympathy. You are murderesses! Therefore, I forbid you to receive Holy Communion for three years, unless you recognize your sin. Repent and confess, weep and ask forgiveness from God and from me, your Spiritual Father, and from the other nuns who did not participate in your sinful behavior.”

The nuns began to weep bitterly and they repented. Thus, he lessened their penance and forgave them. He gave the girl’s sister the penance of not receiving Holy Communion for a whole year. Because the other nuns had shared in this sin, he would not permit them to receive Communion for six months.

St Arsenius foresaw his death a month before it occurred. At the Liturgy for the Feast of St Basil, he announced that he would soon depart from them. With great effort, he was able to serve for the Feast of the Theophany. After the service, he told some nuns that this had been his last Liturgy.

News of the saint’s illness and approaching death spread quickly to all the villages of Paros. People wept because they were about to lose their Spiritual Father, and they hastened to bid him farewell and to receive his blessing.

On the eve of his repose, he called the nuns of the convent to come to him. He told them that the next day he would leave this temporary life and enter into eternal life.

On January 31, 1877 St Arsenius received Holy Communion for the last time and fell asleep in the Lord. For three days, people came to kiss his body, then they followed the funeral procession to the burial site which he himself had selected.

St Arsenius of Paros was glorified by the Patriarchate of Constantinople in 1967. He is also commemorated on August 18 (the uncovering of his relics).