The 40 Martyrs of Sebaste: Confession through martyrdom A troparion of the liturgical Service in honour of the Forty Martyrs says: ‘Suffering with bravery at present, we are rejoicing at what we are anticipating, said the martyrs’. There was evident readiness from the very beginning to employ the confessionary approach to Christianity.

What were they ‘suffering at present’ from? They were tortured with whatever the devil threw at them, since he is always generating ways to prevent the devout from getting on with their business. He begins with minor internal or external annoyances and reaches even the highest of all evil, death. Hence Christians must always be ready to face the entire range of wickedness in order to endure what is inflicted on them ‘at present’ without cowardice. They will only be able to accomplish this if they ‘rejoice at what they are anticipating’. Indeed! Once we comprehend what the divine trophies will be for the devout, we will be able to say: ‘that the sufferings of this present time are not worth comparing with the glory that is to be revealed to us (Romans 8, 18). What kind of glory is this? It is the one revealed by the athlete of love: ‘We are God’s children now, and what we will be has not yet appeared; but we know that when he appears we shall be like him (A John 3, 2). Our Jesus will then dwell amongst us. God amongst Gods. As He rightly says: ‘I said, “You are gods, sons of the Most High, all of you’’ ‘(Psalms 82, 6). 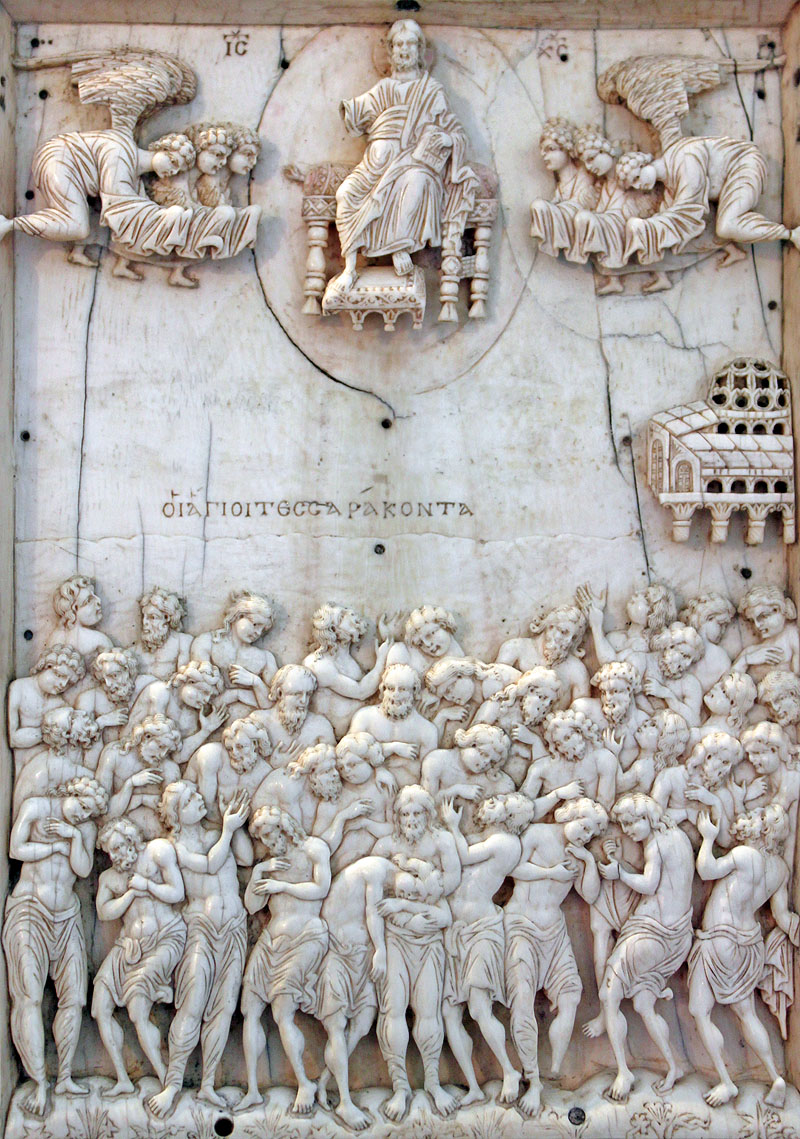 Forty Martyrs of Sebaste. Made in Constantinople, 10th Century

Thinking about these anticipated trophies the forty martyrs were rejoicing and comforting each other, saying: ‘Even if we do not die now we will die one day nevertheless’. If we refuse to die now that we are called upon to demonstrate our faith and the devil is obstructing our path to Jesus, will we not die a little later nonetheless? Death exists and it is unavoidable. What will we gain therefore, if our lives extend a little longer in this hellish and chaotic life? We will die for the sake of the Lord to gain His love. See how prudent they were? Thus they endured the relentless frost and all the other torments inflicted on them. Indeed! Didn’t the torture come to pass? It didn’t last long. Did it?

Ever since their martyrdom on the 2nd century, how many millions of knees have bowed in front of their icon in the churches, pleading humbly for their assistance? This is the glory which followed them on earth. In what kind of glory are they basking now that they have become sons of the Lord?

We also ought to urge ourselves along in this way. For as our Jesus said: ‘The spirit is willing but the flesh is weak’ (Matthew 26, 41). The spirit and the flesh are two separate entities but they influence each other since they are in some way united. If we fail to find ways to coach the man of the ‘flesh’ away from his confusing and dark sentiments, acquired after the fall and he remains in this state, then his spirit will be affected and will obstruct his progress in spite of his good intentions. The flesh affects and drives him towards indifference and laziness, preventing him from accomplishing his fine goals.

Man is a fine creature and tends towards goodness. But he is also strongly drawn towards wickedness because of the fall; therefore he benefits greatly from persuasion which encourages him to remain in the right path, since he is an imitator by nature. We employ various ways and means, fear and threats, to incite and persuade ourselves to habitually turn towards goodness and avoid evil. We find this kind of encouragement in the lives of our Holy Fathers and the martyrs. During their martyrdom inside the arena, the martyrs either consoled each other or encouraged themselves. They knew that human nature had acquired some kind of heaviness after the fall and unless one cajoles it, it does not rise to the occasion.  The Holy fathers, especially Abba Isaiah, give a number of examples and good illustrations which are helpful. Let us return however, to the martyrdom of these Saints.

As soon as one of them gave in to the pressure and denied the Lord, the rest started praying to the Lord to increase their number to forty just as they were in the beginning. Thus, immediately another one took the place of the deserter and forty of them became martyrs. After torturing them with various means, the executioners were ordered to throw all bodies either in the river or to the fire. One, however, was found to be alive. They put him aside since they only had orders to get rid of the dead bodies. The mother of the one who was still alive had been watching their suffering. She was a most devout woman. As soon as she heard that her son was arrested and was suffering martyrdom, she rushed to watch and boast about her Christian faith but also to strengthen him in case he relented. She was a true heroine! As soon as she saw that her son was left behind because he was not dead yet, she yelled to the executioners to take him along too, but they didn’t hear her. What did she do? She picked him up and followed them. And in order to complete her confession as a Christian mother, she tried to throw him in with the other bodies to die and not miss out on the glory which belonged to him.

One can only fall silent here. How it is possible for anyone to describe what went on inside her Christian heart? A mother who sees her smashed up son, screaming in pain, instead of finding ways to comfort him and alleviate his pain, or look to ease the horror inside her own wounded heard, she worries in case her love towards Jesus as well as her son’s is not fulfilled. She forgoes all pain and her female weakness and runs after them so that her son is not excluded from the wholesome glory awaiting those who had suffered martyrdom. Here is a Christian heart which loves the Lord above all else!

This is a perfect illustration which ought to move us, as monks, who have heeded the Lord’s call and special providence. The Lord has absolved us of the bondage of vainglory and has called us to fight at the special arena amongst all those who loved Him exclusively and sacrificed everything, even their lives, in fulfilling their love for Him.

We are the ancestors and co-athletes of the Forty Martyrs as well as of all those who, having heeded our Jesus’ call and been attracted by His Father and strengthened by the grace of the Holy Spirit, have demonstrated their absolute love for Him through all kinds of self-denials and adoration to the best of their human ability. We are not exaggerating when we consider ourselves amongst them. Of course we are found wanting in these unfortunate times. And it is also true that we have progressed to our detriment, but the Lord has not changed His stance towards us. His absolute Fatherly love stands as it was and He also loves us as He had loved the earlier athletes- those great martyrs and confessors. He has assigned us to the same arena and expects us to demonstrate to the measure of our ability that we prefer His love over everything else. ‘We put no obstacle in anyone’s way, so that no fault may be found with our ministry, but as servants of God we commend ourselves in every way’ (2 Corinthians 6, 3-4).

Therefore, you must be certain that in Its greatness Divine Grace which never errs and which has foreknown that we are indeed weak, worthless and wretched beings, has agreed not to deny us the blessing and has consigned us among the chosen ones. The earlier deified martyrs condescend to our wretchedness and support us. They plead with the Lord to make allowances for our weaknesses and strengthen us in our deficiencies without rescinding His fine call to us, in spite of our treason.

Let us, therefore, arm ourselves with our fine intention. Let us plead with the Martyrs today and all the Saints thereafter who are expecting us in the heavens, to intensify their effort and increase their fatherly affection by pleading with the most kind Jesus to receive us. And to pass down to us even a fraction of the zeal which they had when they had accomplished their mighty mission.

Indeed we will then resemble the children who had rich parents. Even though they had not worked nor were able to work, they nevertheless had inherited plenty of riches. If we try our best, then our holy Fathers, the Martyrs and the Saints will condescend and intercede on our behalf so that we will receive what is missing in order to succeed too.

All of us ought to truly demonstrate that we are not going back on our promise and that we also suffer daily because of our weaknesses. We ought to confess our wretchedness and our inability, as well as our intention to pursue our fine goal. We too intend to continue with our mission and complete it in Christ. Amen.