Miracles of the Holy Girdle

Since today is, in one sense, the most important day in postlapsarian history, it seems fitting to relate three miracles which have occurred as a result of Mary taking the momentous decision to accede to God’s request that she bear the Lord. These miracles are all associated with her holy girdle, which is kept at the Holy and Great Monastery of Vatopaidi, on Mount Athos, a monastery whose feast-day, appropriately, is the Annunciation. The accounts are taken from Θαύματα της Αγίας Ζώνης (Miracles of the Holy Girdle), published by the monastery. 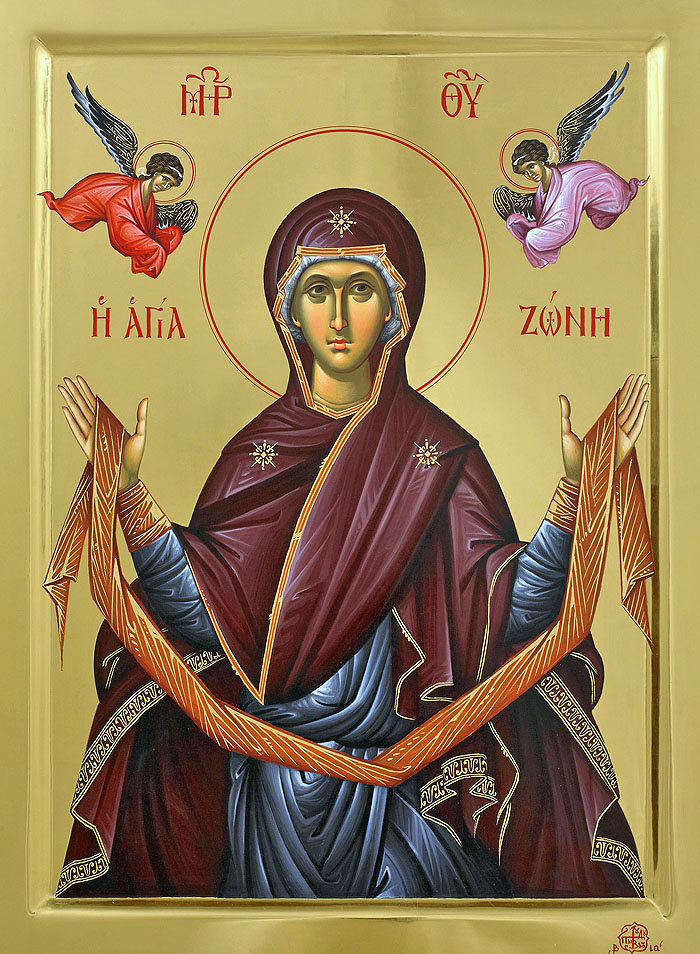 The first concerns a man called Nikolaos Yiannopoulos, a resident of Patra, who was nineteen when he had an accident:

“On 14/10/2000, I was involved in a serious traffic accident and taken to hospital in Rio [a town close to Patra]. I had a burst small intestine- peritonitis- a broken lower jaw and left shin, and peroneal nerve palsy. Six months after I had had operations, there was relative improvement in all areas, apart from the peroneal nerve palsy. I couldn’t move the sole of my foot or lock the knee on my left leg properly. All the doctors said that there was no way I would ever walk again, because it’s the only affliction that doesn’t allow for any restoration of movement in the leg.

I’ve always prayed since I was a little child and one of my requests was that I be healed. Two years went by and, according to the doctors, there was no hope. On the evening of Great Monday, in 2002, I had a dream that we’d set out for a family trip to a mountain and I wanted to be first to the top. I got there all right, but my body was all wounded and my clothes covered in blood. I was by myself and knelt down and shouted out loud: ‘Most Holy Lady, make my leg well’. At the time the sky was clear, but there came a bolt of lightning, and, as if the heavens were split down the middle, the girdle of the Mother of God emerged, hanging down, and wrapped itself round my paralyzed leg. In the morning, when I awoke, I tried to understand the meaning of what I’d seen in my sleep. Inside me, I felt hope that I’d become well and so I took the decision to undergo yet another operation.

My doctor wasn’t willing to even attempt it, because, according to him, there was a strong possibility that it would make things worse. But I pleaded with him and told him what I’d seen in my dream. ‘I’ll do it, then, but only because of your great faith. I’ll operate tomorrow’.

That evening I said my prayers and lay down in bed in the hospital, anxious about the next day. I begged the Mother of God, Saint Nicholas and Saint Athanasios the Great to inspire the doctor so that everything would turn out well. I dreamed that I was in surgery and that the doctor was holding my leg in a perplexed manner, not knowing what to do. Then I saw Saint Nicholas and Saint Athanasios on the left and right of him, guiding him as to what he should be doing and saying that on the third day after the operation I’d be up and walking again.

On the morning of Great Friday (2002) I had the operation, and on the Monday after Easter, the doctor came, doing his rounds. He saw that the plaster cast they’d put on had broken and said that it was a very bad thing to have happened. He took off the old cast to replace it and, out of curiosity, touched the sole of my foot, to see if the damage had been made worse than it had been.  And at that moment- it was really strange- I felt the mobility in my leg. The doctors were speechless when I got up off the bed and started walking after a year and a half of being immobile. I made the sign of the cross and turned to the doctor, overwhelmed with happiness: ‘You see, I told you I’d get well’. He answered: ‘Your faith’s saved you’.

Today (15 August 2004) my health is excellent and I’m delighted to have been able to come to the Monastery of Vatopaidi and reverence the Honourable Girdle of Our Lady, after so many difficulties and spiritual and physical problems.

I pray that her Grace may help and illumine the whole world”.

“For two years I’d been tormented by a rare form of cancer. Last winter was really difficult. When the Holy Girdle of Our Most Holy Lady the Mother of God came to Kastoria, my daughter brought me the little icon and the ribbon [which had been blessed on the girdle] which you [the Monastery] were giving out. As soon as she came into the room, even though I’d been bed-ridden for two and a half months, I got up and, weeping freely, took the icon and started kissing it. It was as if Our Lady herself had come into the room.

When I went to see the doctor in the hospital, he gave me some medication and told me to wear a special orthopedic belt and to sit up in bed. I told my daughter that I’d wear the Mother of God’s ribbon and believed I’d get well. Our Lady performed her miracle and in three weeks the pain had gone”.

“A month ago I received an envelope which contained a treasure for us who live so far from the revered Holy Mountain. It was a ribbon which had been blessed on the Holy Girdle of Our Lady. Listen to the first miracle she performed. A friend of mine came into my shop and told me that his father was about to die. He’d had an operation for cancer in the brain three weeks earlier and had lost touch with his surroundings. Everyone was very upset. I told the man that somebody had sent me, from the Holy Monastery of Vatopaidi, a ribbon from the Holy Girdle. ‘Take it and make the sign of the cross over his head and he’ll get well’, I told him. ‘But make sure you bring it back, so I can give it to other people to reverence’.

He did, in fact, go to the hospital and make the sign of the cross over his father’s head. After a while- and he’d been in a coma for three weeks, like a dead man living- he yawned twice, opened his eyes briefly and then was lost again. My friend put the envelope with the Holy Girdle under his pillow for the night and the miracle happened. The next day the invalid woke up, talked and got out of bed for a bit. Now he’s much better. The father wears the blessed girdle and the doctors attending him can’t believe what’s happened. They were expecting him to die. My friend’s asked me to leave it with him for a while, until he gets out of hospital”.