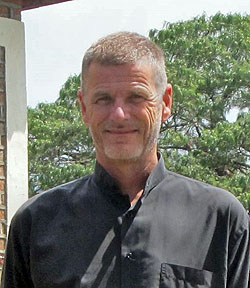 Hi, my name is Bill. I am Orthodox and I am a missionary. I’ve been accepted by OCMC (Orthodox Christian Mission Center) as a missionary candidate and have been busy raising support for a ministry in Kenya since Thanksgiving 2014.

That I would end up an Orthodox missionary was not an option on my event horizon when I first began to formulate a plan for my life. First of all, I grew up in a Protestant home – Presbyterian to be precise. While family interests biased me towards medicine or the sciences, my fascination and training, however, was in history which, however interesting, does not make for an easy career path. And I was a musician to boot, playing the viola in orchestras and ensembles. Unexpectedly, the missionary option intruded itself on my list of possibilities for my life towards the end of my college career. I was by then a sincere Evangelical involved in a campus Christian fellowship. The summer before my senior year, I exchanged my studies in Medieval and Renaissance History at Duke University for living in the rural areas of Kenya with a Kenyan pastor and his family as part of a short-term mission trip in 1980. Those three brief months changed my life.

My experiences that summer convinced me that I was called to be a missionary. I realized, however, that I was woefully prepared for such a life, so I set myself to get the training and experience that I needed. I got ministry experience by working as a campus staff member for InterVarsity Christian Fellowship at the College of William and Mary. And then I also got my Masters of Divinity degree from Gordon-Conwell Theological Seminary north of Boston, MA. I was ordained as a Presbyterian Church (USA) pastor in 1989 and served churches in North Carolina and Pennsylvania. I was accepted for PhD studies at the University of Cambridge (UK) and moved there with my family in 1996. After completing my studies, I was accepted as a missionary and assigned to Addis Ababa, Ethiopia, where I taught at the Ethiopian Graduate School of theology for 8 years. I also served as the senior pastor of the International Evangelical Church in Addis Ababa for 4 years. In 2008, we moved to Nairobi, Kenya, where I taught at the Nairobi Evangelical Graduate School of Theology.

In 2011, I was relieved from my position as a professor of theology and history and asked to resign from my mission. In January of that year, I had been baptized and chrismated into the Orthodox Church of Kenya. 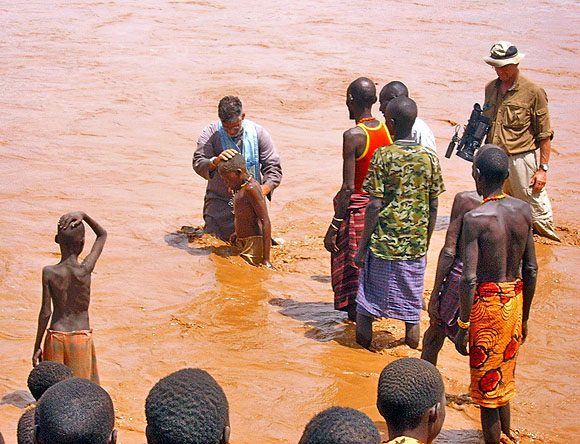 I met an Orthodox priest early on during my studies in Cambridge and, during tea time breaks at the research library where we both were studying, I began to hear the story of the Orthodox Church. I was astonished, as I had never been exposed to the history or the theology, and the more I learned, the more fascinated I became. The process of my converting to Orthodoxy from having been an Evangelical, Reformed pastor, scholar, and missionary took 14 years. Because of my subsequent leadership positions in churches and ministries, I had not allowed myself to question the theology or the history of my little corner of Protestantism. But when I discovered that Orthodoxy was not just different in emphasis but also different in kind from all Western forms of Christianity, I was shaken to my foundations. I began to see the development of Western theology in a new light, which led me also to see how some of my own theological choices were creating inconsistencies in my own faith and life. I deliberately began a process of taking on-board those aspects of Orthodox thinking and practice that I could get away with, given my responsibilities as a Protestant pastor and seminary teacher. I wanted to become Orthodox, but I knew that to do so would be very costly, and I feared that my life as I had known it would come to an end. So for years I read Orthodox books, prayed Orthodox prayers and straddled the fence between East and West.

A turning point occurred when we moved from Addis Ababa, Ethiopia to Nairobi, Kenya in 2008. I no longer had the responsibility of pastoring a large church and of preaching every Sunday. This set me free to participate in an Orthodox Church. I began attending Sts. Cosmas and Damian Orthodox Church in Nairobi, the Church which served the international Orthodox community there. I also got to know the priest, Fr. Innocentios, a Ugandan archimandrite who also served as the administrator of the Orthodox seminary in Nairobi. Attending the Divine Liturgy every week made me increasingly familiar with both the liturgy and the liturgical calendar. I started trying to keep the fasts and participated in parish life. I discovered that Orthodox services were held daily at the seminary, which was closer to where I lived, so I began attending a service on Thursday mornings as well. 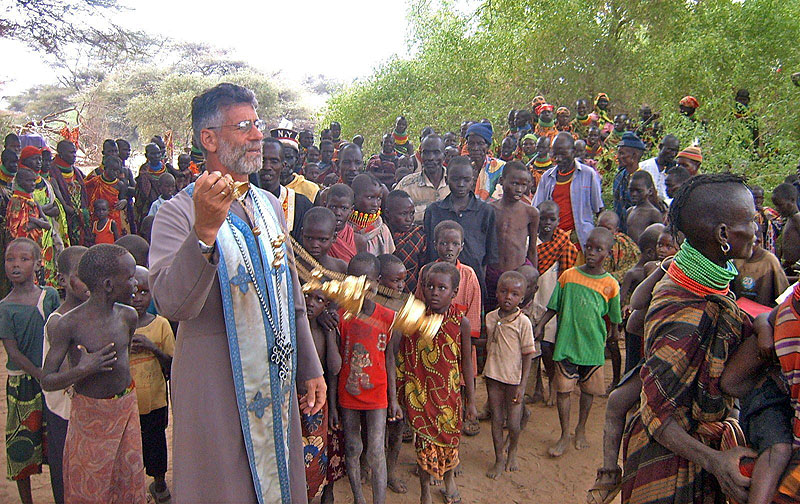 Fr. Martin leading a procession of newly baptized in Turkana

On that fourth Sunday, I found myself standing just to the side of the great canopied pulpit in the middle of our nave. Along the sides were icons of the four Evangelists, and on the front, just above eye level, was an icon of Christ holding an open Gospel on which something was written in modern Greek. As the Orthodox faithful were going up to receive the Mysteries, I once again felt powerfully that I wanted to join them and that this was where I belonged. And once more I tried to shove the feeling out of my being. To distract myself, I remember looking up at the icon of Christ. I slowly started to make out what the stylized script of the Bible verse was. ‘If anyone… wants to be… my disciple… let him deny himself,… take up his cross… and follow Me.’ I suddenly realized that I wasn’t just reading some inscription on an icon, but that the Lord Jesus Himself was addressing me. It suddenly became clear that whatever the cost, the call to follow Jesus was now taking me into the Orthodox Church. And once I heard His call in these terms, my response was easy. I started taking those steps which led me five months later to being baptized and chrismated an Orthodox Christian by His Eminence Makarios, the Archbishop of Kenya. 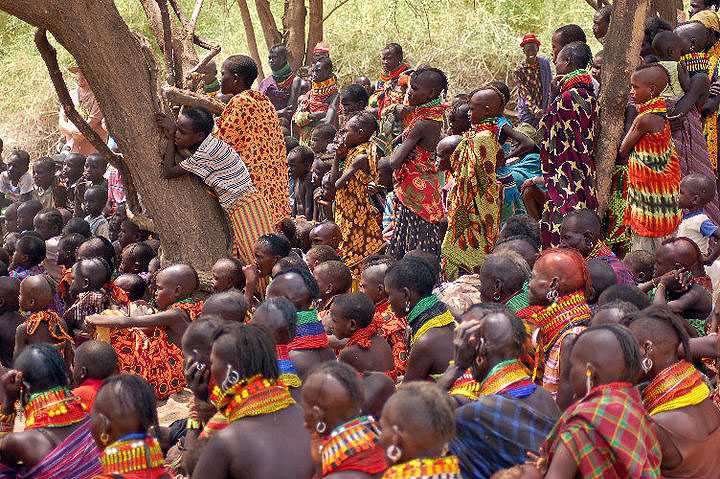 People of Turkana listening to homily

I think God knew that I needed to be absolutely sure that becoming Orthodox was His call, because just as I had feared there was fallout. I was terminated by the board of the university where I taught. I was told to resign by my mission board. I was adrift for some months, not knowing what I might do next, until I was offered a position by another Christian university whose board and faculty were happy to have an Orthodox faculty member. Another small Protestant mission board accepted me and provided an interim means for me to continue as a missionary, at least until my next furlough.

That next furlough was scheduled for the summer of 2013. What I didn’t realize at the time was that the originally intended 4 month ‘home assignment’ furlough had slowly become a leave of absence that has lasted now nearly two years. There were some family issues that I needed to address. Sadly, these were not resolved in the way that I had hoped and I thought that my life in Kenya and my career as a missionary serving the churches there had come to an end. So, in February 2014, I traveled back to Nairobi for the purposes of wrapping up my affairs and selling my possessions. It was a sad and desolate time for me.

But on the weekend before my return to the States, I had scheduled to meet with a friend who serves as the deputy dean of the Patriarchal Orthodox Seminary. When he asked me why I was leaving Kenya, I told him. Then he replied that in Christ there is forgiveness and healing, and that they wanted me to come and teach at the seminary and, that I could even live there on the campus. Not only that, but the Dean – His Eminence Archbishop Makarios – also reiterated the same message and invited me personally to return and join the faculty there, but he wanted me first to return to America and be sent by the local churches through OCMC. I was thunderstruck. And, I was profoundly grateful. 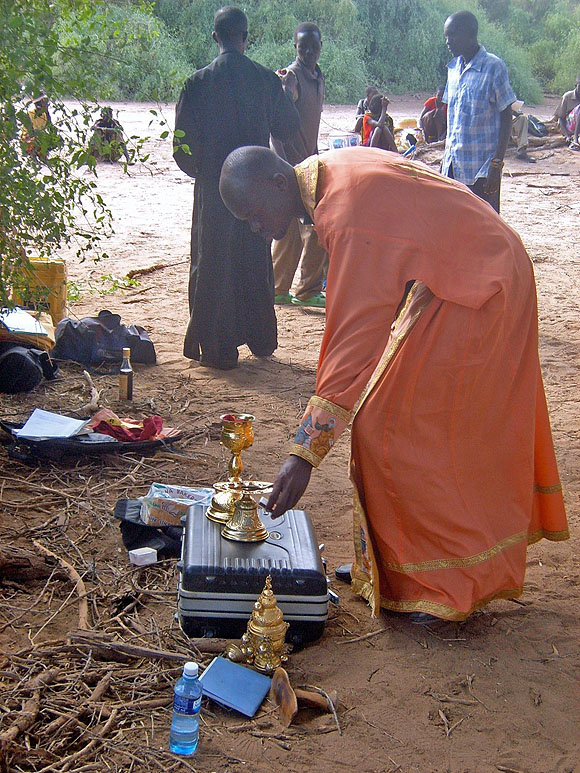 Preparing for liturgy in the bush

When I returned to the States, I began praying for God to open a way for me to become an Orthodox missionary. My Protestant mission had been wonderful to me and they were willing to keep me on, but I had a strong sense that, if I was going back, I wanted to do so by Orthodox means. I reestablished contact with OCMC (Orthodox Christian Mission Center) and began the application process with them. I had been in contact with them since my conversion, so they were fully aware of my circumstances and the challenges I had faced. The process involved a lot of paperwork, essays, interviews, psychological testing, references and lots of back and forth communication. The OCMC Missionary Department needed to verify on behalf of all sending members, parishes, clergy and hierarchs of Orthodox Churches in America that I was candidate material, someone who could fulfill the set missionary requirements and the appointed ministry in Kenya. I learned a new level of patience during these months; but finally, the week before Thanksgiving, I was given the good news that the OCMC Board of Directors had accepted me as a missionary candidate. 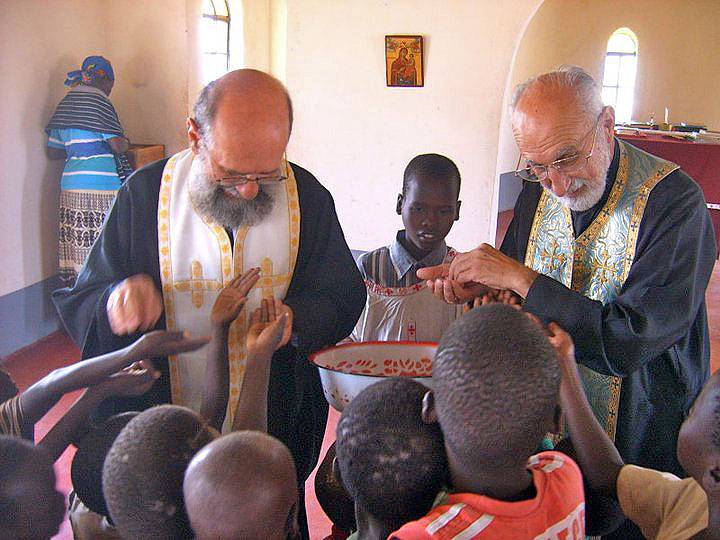 What follows is the story of my getting there from here, which is a post in itself. But for now, it’s enough to brief you on how this unlikely convert has ended up preparing for full-time Orthodox mission work under the Omophorion of His Eminence Makarios the Archbishop of Kenya. Kristo amefufuka! Kweli amefufuka!

If you or your parish would like to support me in my upcoming ministry in Kenya, go to my page on the OCMC website and click on the ‘Support’ button: http://www.ocmc.org/about/view_missionary.aspx?MissionaryId=41