Faith is a Many-Feathered Quetzal

Three summers ago we had the good fortune of trekking to an ecological paradise, Costa Rica.  So lush and green, so verdant with life that certain plants, bromeliads, would sprout in mid-air from the crowded cover of other trees.  Their roots would dangle freely as if suspended from the sky.  Packed with explosive examples of flora in one square foot of space, Costa Rica was a mini-treasure trove of wildlife.  While walking through the mossy footpaths from our lodge to the mouth of the famous cloud forest in Monteverde, the guide shouted, “Stop!” His gaze was pinned to a scramble of branches high up in a wild avocado tree.  He set down his equipment, set up his tripod, adjusted his telescope binocular lens, all the while without taking his eyes off that spot in the mess of leaves and peered inside.  “There it is! It’s magnificent!” he smiled into the lens. 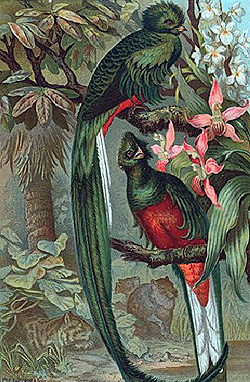 We scrambled to get a turn at the eyepiece and surely, one by one, each of us released a delightful sigh of wonder when we saw what had been magnified to 15X.  It was a quetzal, one of the most beautiful, rarest of all iridescent birds of paradise in all of Central America.  It was the mythical Quetzal that the Aztecs had hunted down for its rainbow-colored tail feathers to adorn the headdresses of their kings. The Mayans thought it was a god, who became personified in their leader and king, Quetzelcoatl. When it flew across the lush green backdrop of tropical forest, the quetzal resembled a floating rainbow.

It was magnificent! Even through the lens, its radiance, the green-ebony twinkle of its eye, was clear.  The manifold specks in its coat shimmered in the bath of sunlight over it and shot off cadences of gold, dark indigo, turquoise, red-orange flush as it shifted on the branch.  Its tail plumes trailed almost three feet down from the tree.  It seemed as if he did need an attendant to carry his train.  To think, if it hadn’t been for the keen eye of our guide, we would have missed it.  We would have ignorantly walked right under it, scouring miles and miles of endless green in the forest with our binoculars to no avail.  We would have gone home a week later grumbling and all disappointed about the inaccurate reports of quetzal sightings in the guide books, cursing our bad luck for having spent so many thousands of dollars and still not one sighting of a quetzal.

Faith is a bit like that quetzal.  Faith seems to be a bit like finding the rare quetzal in the cloud forest.  We are so intent on finding God, on finding clear-cut, can’t-argue-with-that signs of His existence that we miss the full fathom of His glory in front of our nose.

We go through the world with a fine magnifying glass looking for traces of God’s existence, to find He has eluded us.

There was a time in my life when I was so eagerly searching for God, searching for some sort of answer to the mysteries of the universe, the eternal human questions—why am I here? what is my purpose? is there anything beyond this?  I took all the classes in philosophy of religion, learned about Sophists, pre-Socratics, existentialists, phenomenologists, the argument from design, I devoured any book that dealt with the supernatural—Thus Spoke Zarathrustra, the epic of Gilgamesh, The Dancing Wu Li Masters, The Tao of Pooh, The Golden Bough.  I visited Shinto temples, synagogues, monasteries, museums, talked to rabbis, clergymen, priests and preachers, pundits and guurs.  But all the while, I could not find any positive proofs of God’s existence.  I was more befuddled about what I had learned and less sure of what I had known before I had even started my quest to find God with my extra-sensitive, state-of-the-art binoculars on.

In the end, my metaphysical quest had led me nowhere. I went through the world with a fine magnifying glass, looking for traces of God’s existence, only to find He had eluded me.  All I had was a pretty hefty magnifying glass and sore eyes for looking so long and hard.

What I lacked was what our naturalist guide had—the eyes to see the signs, the sense to slow down at the slightest movement, the sensitivity that made the presence of the bird possible, the familiarity with the fabric from which the quetzal had come from, and lastly but most greatly the love of the quetzal itself.  Faith is what gives us the spiritual eyes to see God’s presence in the world.  It’s the thing that makes one person gaze into the walls of a cell in a Petri dish and understand beyond a doubt what a glorious creation God has made.  No mathematical equation needed to arrive at that conclusion.

How do you get faith?  Well, that’s a mystery.  It’s a grace.  It’s a gift.  What makes one person listen to Bach’s Concerto No. 9 and hear the beating of seraphim’s wings while another will only hear notes played by a violin, a cello, a flute or two?  It’s the sensitivity one tongue has for discerning the differences in different ages of the same wine.  What is clear to one person is nonexistent for another.

And this is not to say that faith, the existence of God, is a subjective matter.  The humanist argument has posed that God is a creation of the human breast, that He is a relativist construct.  But that isn’t the case at all.  Anyone who has come to contact with the “holy” will know in a way beyond his physical senses that “something” exists and that “something” is something so strange and overwhelming, it defies our grasp of it.  The same argument can be tipped on its toes—just because you have never seen the bird does not mean it doesn’t exist.  The quetzal is out there.  You just have to be patient enough and humble enough and keen enough to catch a glimpse of it as it moves through the green clouds—resplendent, wonderful, in all its glory.

God speaks to us in subtle, mysterious ways.  He leaves traces of His majesty in the robe of the poppy.  God reigns in the realm of possibility—in that slim 2% chance of recovery that the surgeon circumscribes.  He chisels His word on an inner-city wall when a kid is looking for confirmation as to what he will do when he grows up.  When we love and become familiar enough with the way God works, He drops us clues—the fragment of Scripture that accidentally popped into your head when you were about to walk into a scene of a crime.

God is real.  God exists.  God is out “there” in the universe but He moves imperceptibly like a mouse.  He flies around his domain equally and freely, but He alights only on those He sees fit, only those with a pure heart, with the patience to wait for His movement, with the discernment to see Him as He moves (for the bustle in the hedgerow, the stray spackling of wild avocado crumbs at the foot of the laurel tree.)  For now, His voice is a whisper He leaves in the falling rain, a message you hear in the hum in the heart of a flower. Make no doubt about it—His presence is there.  You will know.  The same way you know your lover longs for you.

But if you go out into the forest with a net and a cage and a rifle to hunt Him down, you will be left empty-handed.  If you go out into the wide universe to track down God and stuff Him as a trophy over your mantle, He will elude you like the stealthiest tiger.  He will not be made into a sport for your amusement, a quarry to quench your thirst for intellectual pursuit.  You will go into the jungle and come out very disappointed.  What is more, you will miss the radiant, resplendent bird of paradise as it scintillates its robe of rainbow through the forest canopy just as you turn your shoulder.