We now leave the protestant understanding of the term sin, which was examined by Friedrich Schleiermacher and Sören Kierkegaard. We change our perspective in order to analyse the Orthodox comprehension of what it means to be sinful. I will exemplarily examine this by analysing Mantzarides` remarks of the term sin. Georgios I. Mantzarides is one of the most important Orthodox theologians of our time. He was holding the chair of Ethics and Sociology of Christianity at the Theological School of the Aristotelian University of Thessaloniki. He published a numerous of works about the principles of Orthodox theology, which are translated in many languages and which are “considered by many Orthodox scholars to be classics in their fields”[47]. 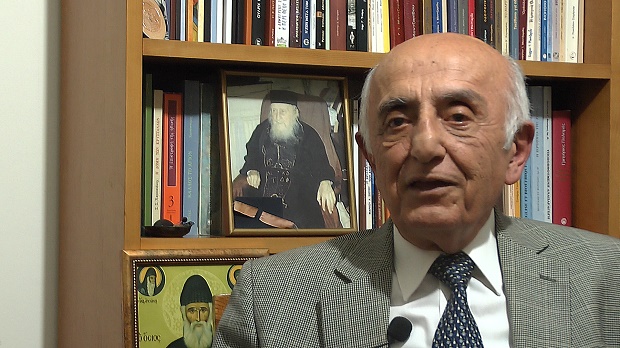 I first refer to Mantzarides work “Glauben aus dem Herzen”, which was published in order to present the Orthodox theology to a non-Orthodox readership. He argues that Christians generally think, sinning means to contravene the biblical law, for example the Ten Commandments. Deeper values as love, gentleness and lowliness wouldn’t play any role for them, what makes it for Mantzarides a superficial comprehension of acting sinfully. For developing a thick understanding of the term sin, one must study the biblical and patristic remarks to sin more carefully, what he afterwards does.[48] Mantzarides examines an understanding throughout the Old Testament, which indicates sin as the human decision to avoid God in order to replace him. In the New Testament as well as in the patristic, he finds the same understanding, which he thinks is described more elaborative than the one from the Old Testament. In addition to that rejection of God the New Testament concludes sin as the unacceptance of the Gospels as well as to be part of Christ`s church.

He concludes, that sin is an attitude rather than an action, a thought or a tendency. What is important concerning a thick comprehension of sin according Mantzarides, is above all to always refer to the redemption by Jesus Christ. Being sinful means to refuse Christ`s offer of the salvation, so that one would not to be able to practice charity and to see itself as the image of God. Mantzarides quotes Vasileus the Great in order to underline this understanding. Vasileius the Great also argues, that sin is to surrender life given by God and to approach to the death. So death mainly means separation from God, whereas salvation is the siege over it. We can conclude at this point, that Mantzarides compares sin to the state of being dead, that he criticizes an understanding of sin which is orientated on law. In contrast he supports one, which is strongly connected to the salvation by Christ.[49]

To Mantzarides the salvation of men means to be part of the body of Christ and to live a life within his rise. As Christ is the only human being who is free from sin, he is the only one who can connect men with God, so that faith to him means taking on the salvation given by Christ. The Gospels therefore don’t distinguish men from being moral or vicious, but from taking the decision to belong to God and Christ or not. Belong to God means to take his gift of mercy. Though not to take it means to sin. Getting more in detail, to take that gift implies to admit ones faultiness and also to be regretful. Mantzarides also stresses the generality of sin and therefore the necessity of repentance of all men. The crucial point of getting rid of sin though is to take the decision to regret towards God, which is the only norm according to which men is judged by god. Sin is not to be regretful but boasting oneself.[50]

[47] See the backcover of Mantzarides, Georgios I., Time and Man.