Styrofoam and Saint Isaac the Syrian: Toward an Orthodox Environmental Ethic

In my experience, whenever the subject of the environment is raised in Orthodox circles, one is often aware of an uneasy ambivalence. It is not a topic that lends itself readily to pleasant and congenial discussion. Is this because the Orthodox sensibility or ethos is aroused to defend itself against alien concepts, western bandwagons and worldly trends? Or is it because we know in our hearts both that there is something radically wrong with current human exploitation of nature and that we ourselves are not doing enough about it? Is it rejection of worldly vanities or reality-avoidance? Perhaps it is a bit of both. 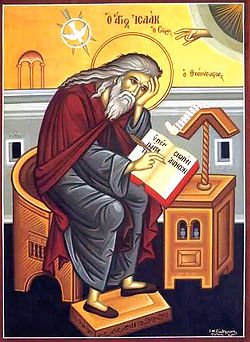 We thrill to the words of the great St. Isaac the Syrian when he sings about the “merciful heart” that embraces all of creation in love, even snakes and insects and demons. But we hate to talk about replacing in our church kitchens the cheap convenience of styrofoam cups with breakable dishes and the hassle of finding dishwashers for every parish function. We are proud of our Orthodox Tradition when others recognize in it the catholicity and harmony of its iconic, sacramental vision of the universe. But we are reluctant to recognize the ethical and ascetical responsibilities of our Orthodox cosmic world view.

Here is a silly (but perhaps not so silly) question: if styrofoam cups existed in St. Isaac’s day, would he have used them? The point is this: the goal of Orthodox spirituality is toward transfigured life — in all its dimensions, human, non-human, cosmic. The pneumatic virtue acquired by the saint suffuses and transfigures everything in his life, not just his body, but his cell, his utensils, even his clothes — the very meaning of relics depends upon this fact. The saint in ancient times lived “close” to nature in a way difficult for us to imagine; and nature often spontaneously honored the saint’s virtue by an irruption of paradisal conditions. But we today live separated from nature by several technological levels. The utensils of a desert father were made by hand out of what nature provided; the utensils and artifacts of our consumerist culture are made by extractive, exploitative and destructive processes unseen by most of us. A utensil like a styrofoam cup is not a simple product of an artisan’s craft. It is a complex artificial construct the making of which creates a trail of degradation throughout the natural world. It takes a strong ethical sense to imagine the destruction behind this seemingly innocent utensil. But it is this ethical imaginative power that is needed if we are going to live by a genuine Orthodox ethos with an ecological dimension.

According to Orthodox tradition, the world is a sacrament of the divine presence, a cosmic revelation, a means of communion with God, a sacred Temple. The vocation of every human being, as microcosm, is to be a mediator between the creation and the Creator, to be a center of unity, harmony and eucharistic transfiguration, to offer the world to God in thanksgiving. What kind of metanoia is needed for us to fulfill this vocation in the context of the world in which we live? What kind of ascesis will need to be practiced to approach a level of consumption that is both sustainable and healing? How do we embody the eucharistic vision of the cosmos of St. Maximos and the charitable heart of St. Isaac in a way that honors God, heals the creation and reflects true Orthodoxy? Such is the task of today’s Orthodox Christian.

This article was written for The Orthodox Fellowship of the Transfiguration.

This article is posted here with the permission of Vincent Rossi.